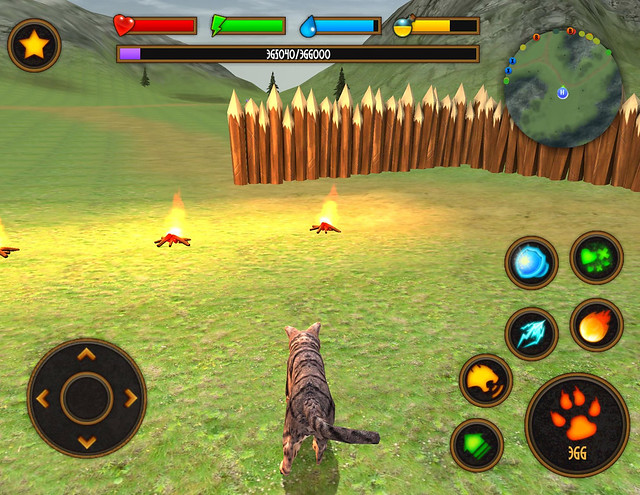 But instead of that, do you know what I did? I played a game 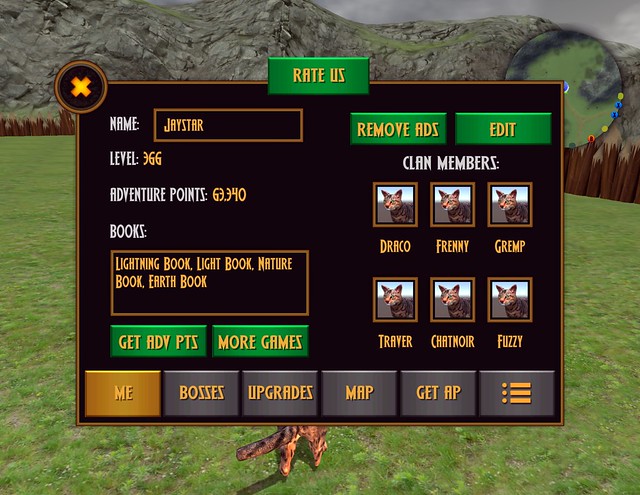 I downloaded the game Clan of Cats years ago, but I never played it. Until today. For some reason, I randomly decided to give it a spin. And it’s actually a lot of fun. You’re a cat, and you gather your clanmembers, build your home base (apparently these cats use fire and build log forts, but okay), fight creatures to get magic, fight bosses and conquer other clans. 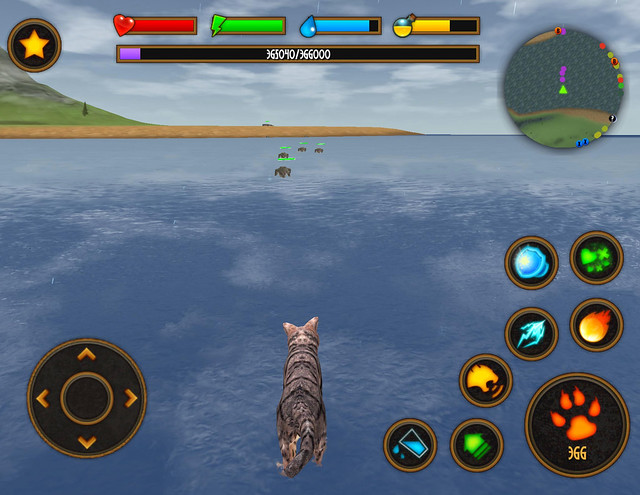 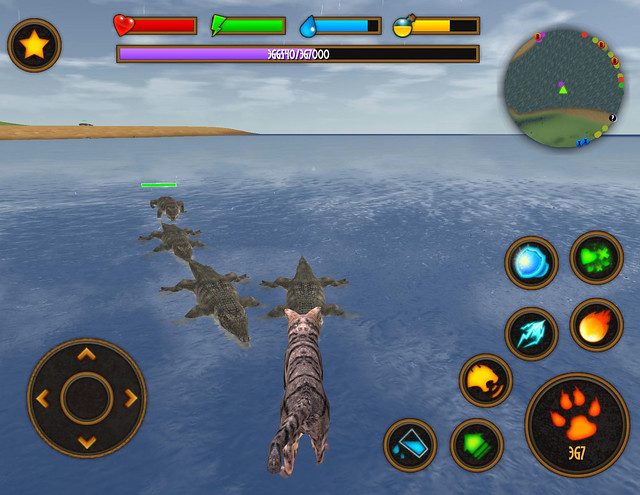 One feature of the new iPhone 11 Pro is that when you take a regular photo, the camera also takes what Apple calls a “LivePhoto,” which is the photo you took time-lapsed for three or four seconds with a little motion. It’s kind of like those moving pictures in Harry Potter.

Not technically a selfie, per se, but definitely related. 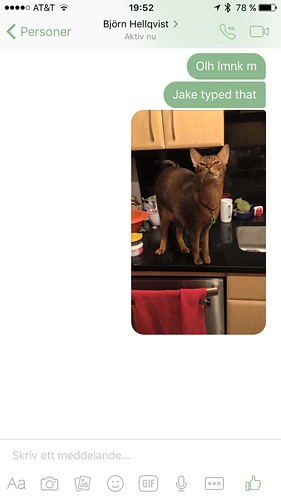 I was messaging with Björn in the kitchen and set my phone down. Jacoby stepped on it, and typed:

And he sent it! I’m not sure how he managed to do that with his toepads, but… 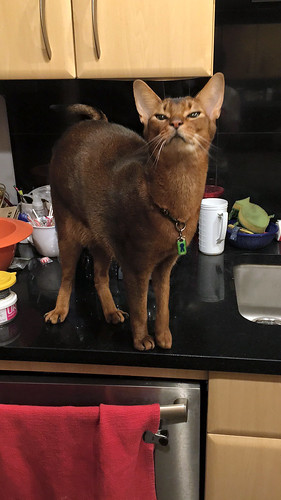 …he seemed just way too proud of himself for it to have been completely accidental! Wonder what he was trying to say?

When Jacoby and I went to the NEMO show a couple of weeks ago, we took the MBTA to Attleboro and met up with Meg, and then we drove to Sturbridge. 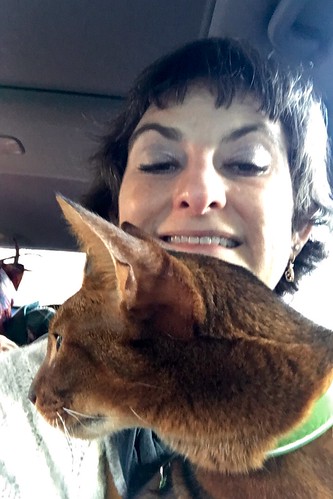 While Meg was collecting her things to bring to the show, Jake and I waited in the car, and I amused myself by taking some selfies of us to send to Björn. 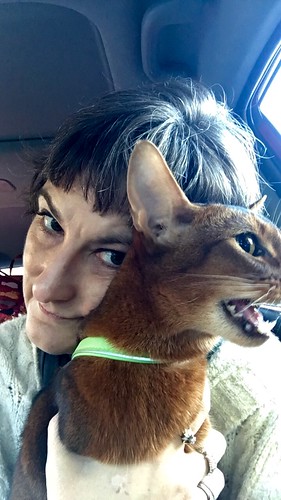 I had just gotten my new iPhone 6s, and this was my first big chance to try it out. 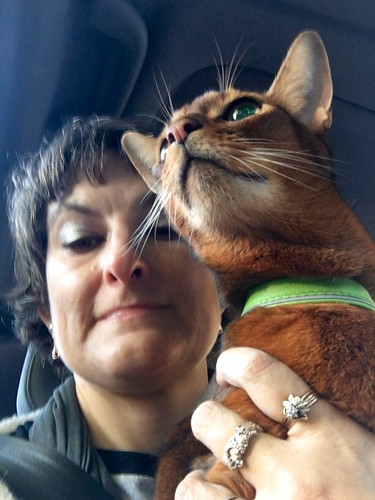 It was actually the only camera I used at the show – all the photos I took were with my phone. I guess that shows how far smartphone cameras have come, eh? 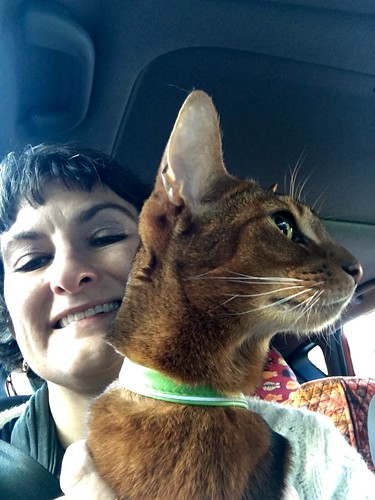 Of course, the front camera is never as good as the rear one, and there’s no flash… 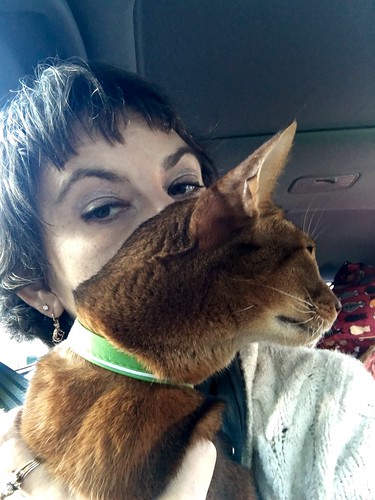 …but who needs a flash in the morning sun, anyway? 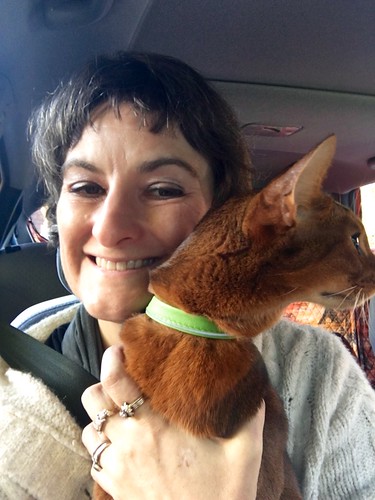 Despite the early hour, I was happy to be going to a cat show again! And Jake was happy that he got to ride the whole way sitting on my lap, not in a carrier. 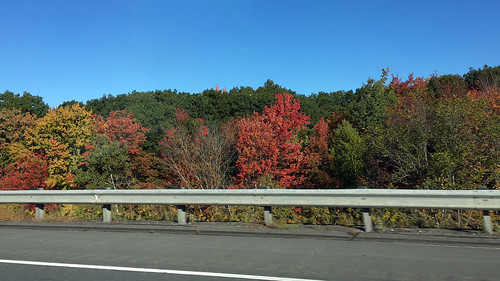 And, just for fun, here’s a few photos of the gorgeous autumn foliage we saw on our way to Sturbridge. 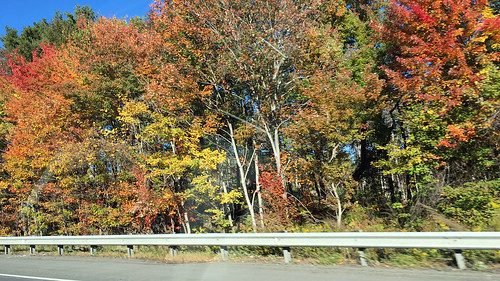 Of course, New England is famous for the brilliant fall foliage. 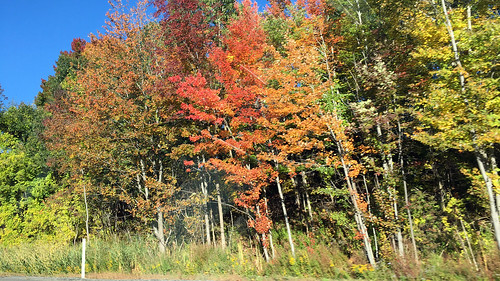 Fortunately, this is one thing I won’t miss in Sweden. The leaves turn pretty colours there, too.

Björn and I keep in contact via Facebook Messenger when we aren’t on Facetime. Since we reconnected last year on 18 June, we’ve sent nearly 50,000 messages back and forth. Granted, many of these were just emoticons or typo corrections, but it’s still pretty impressive for a 15-month period.

However, it has created a rather unique relationship between me and my iPhone…one that I’m not entirely sure Jacoby approves. 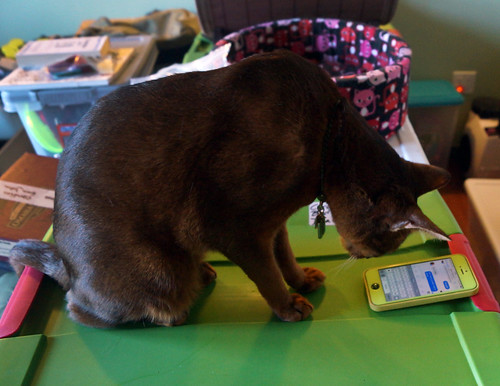 “Holy crap, are you still Messaging him?” 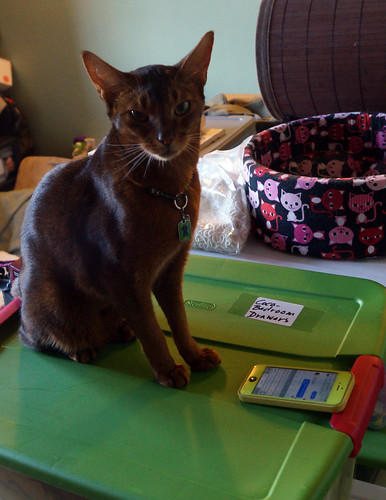 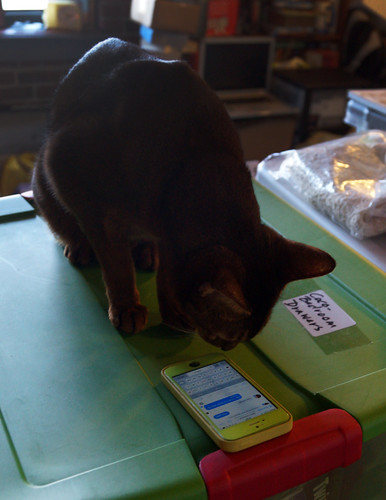 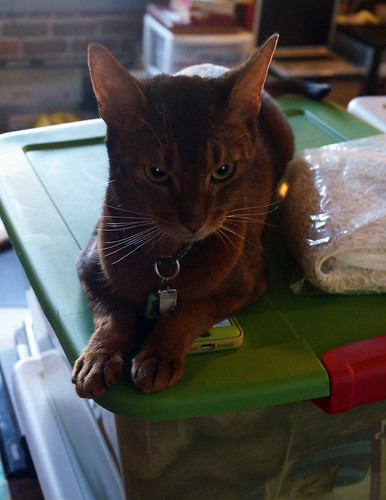 “Yeah, I’m taking away your phone privileges. Time to pet the cat instead. Or, better yet, how about fetching some treats?”

I am so behind on my “extra” posts, because I’ve been concentrating quite a bit on the cartoons. I have a collection of “other Aby” things to share, and this is one I’ve been meaning to get to for some time.

Weather Whiskers is a smartphone app that my sister got me hooked on last year. It’s just a weather app like the default one all phones come with…but with cats. It’s free, and it’s much more charming than the usual clouds, suns and lightning bolts that regular weather apps give you.

But you know I wouldn’t be posting about this app if it was just random cats, no matter how awesome it was. Of course there’s an Aby connection.

I’ve seen this Somali for Fog and also for Hot & Sunny. I have not seen an actual Abyssinian yet, but…

…Weather Whiskers does feature this Frida Kahlo Aby on their Facebook page banner! 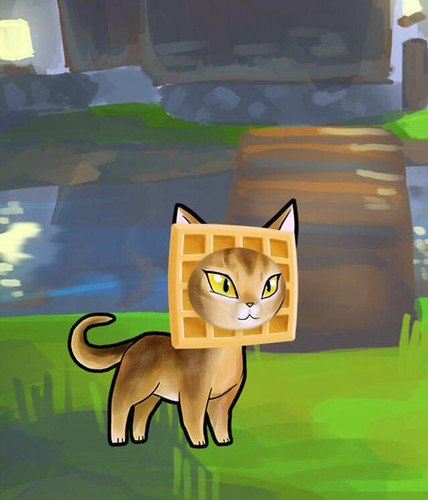 Bread Kittens is a game for iPhone and iPad that involves outfitting cats with bread armour and setting them to battle with unbreaded kitties in order to save them and save Catlandia. Of course, as you defeat the kitties, you add them to your kitty dojo. 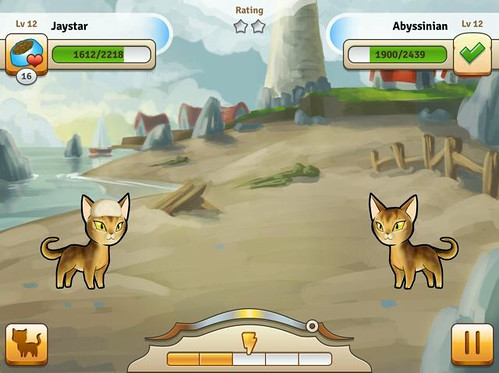 And of course there are Abyssinians. That’s part of the game’s charm: almost every cat is a recognised breed. 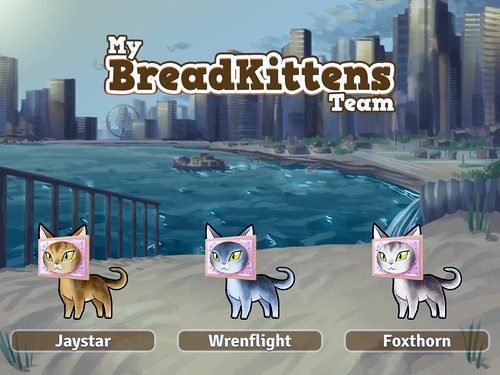 In fact, there are three different colours of Abyssinians in this game! Besides the ruddy (I named mine Jaystar), there is a blue (who I call Wrenflight) and a…chocolate silver? Well, I’m not sure what colour he is, but I named him Foxthorn. Here’s my all-star Aby team outfitted in pink Pop-Tarts. 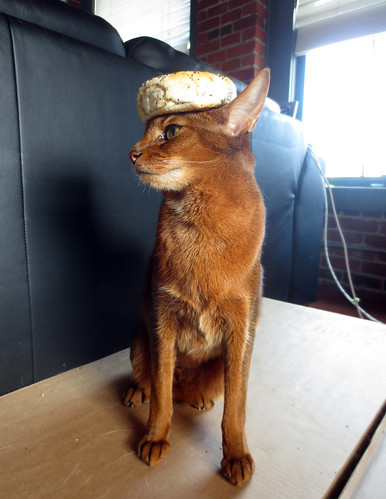 Of course, Jaystar is named after Jacoby…or rather, what Jacoby’s name would be if he were a Warrior cat. 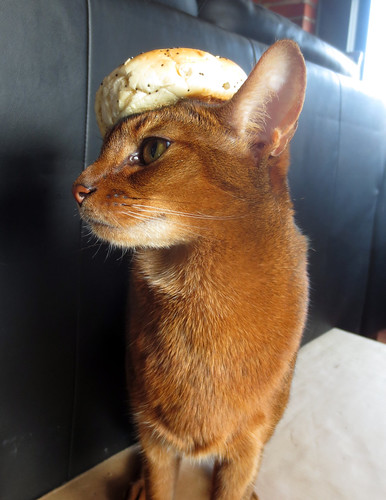 I’ve been having so much fun playing with my virutal Abyssinian and his virtual bread armour that I couldn’t resist breading my actual Aby with an actual bagel. 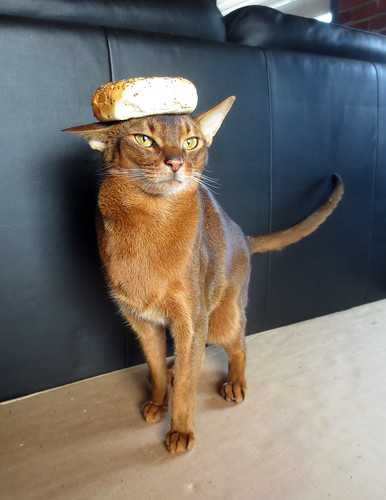 In the game, different types of bread afford you different protections and different benefits. Some breads assist in the capture of other cats, while other breads aid your attack. These are classified into groups: Flatbreads, Breakfast Breads, Loaf Breads, Chinese Buns and Bagels. 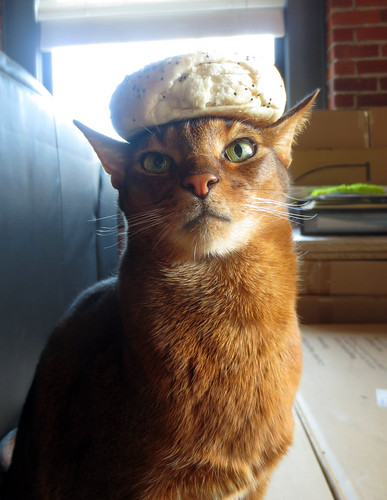 As you can see, Jake has a Poppyseed Bagel. This is a pretty powerful bread armour: it adds 90% of the hit points your cat takes from his opponent. 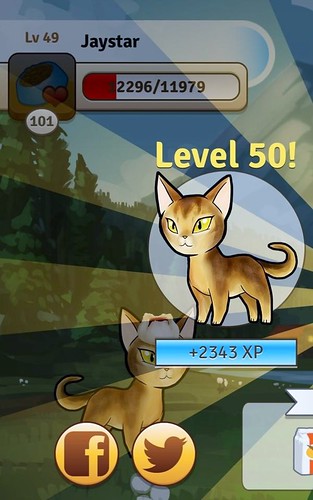 In the game, though, I have Jaystar wearing a Pork Bun instead. 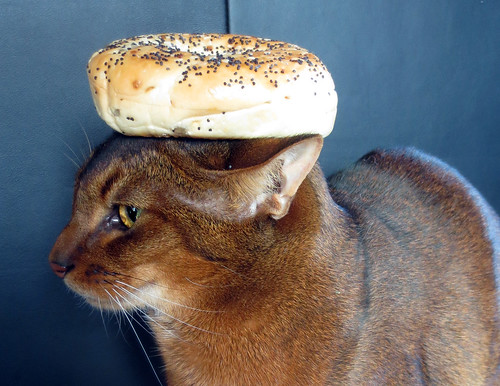 I don’t think I could get Jake to keep a meat-based bread on his head for any length of time in real life. Especially not one with barbecued pork in it. 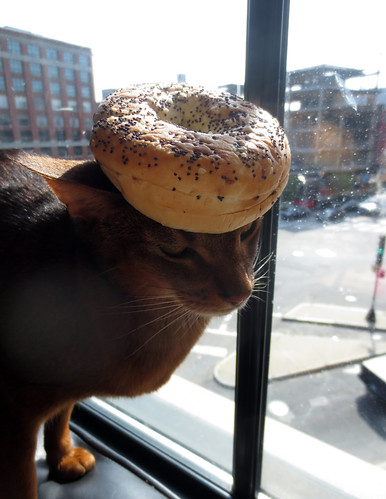 Jake just loves it when I discover a new game to play!