This morning, Facebook reminded me of Christmas three years ago. We didn’t know it at the time, but it was our last Jul with Logan, and it was also our last Christmas at Björn’s mother’s house. 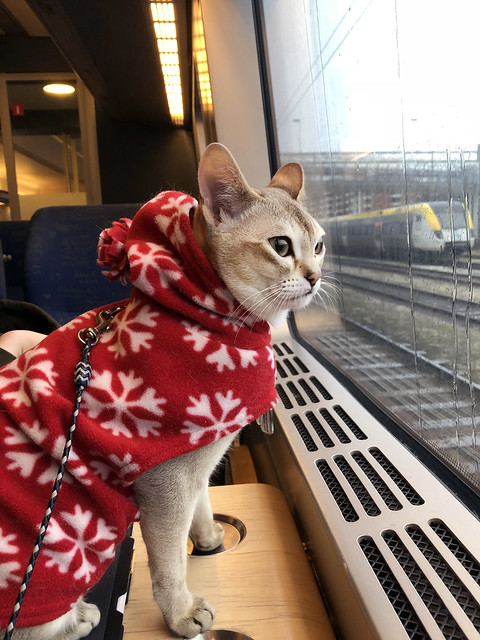 We took the train to Jönköping Julafton morning. It was fairly chilly, so he wore Jacoby’s old snowflake hoody. 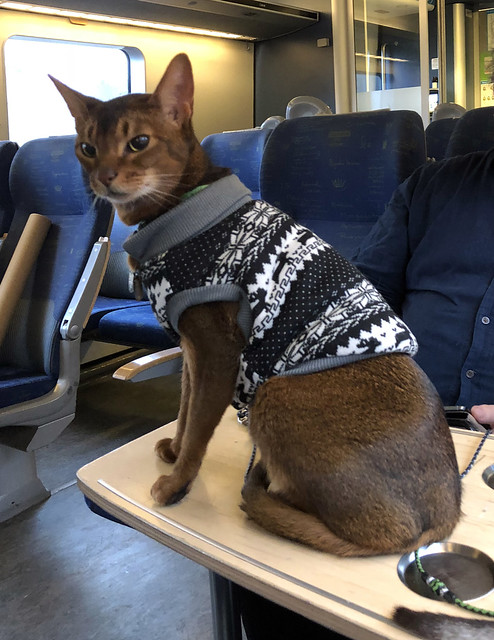 Jake had a snazzy new sweater of his own. 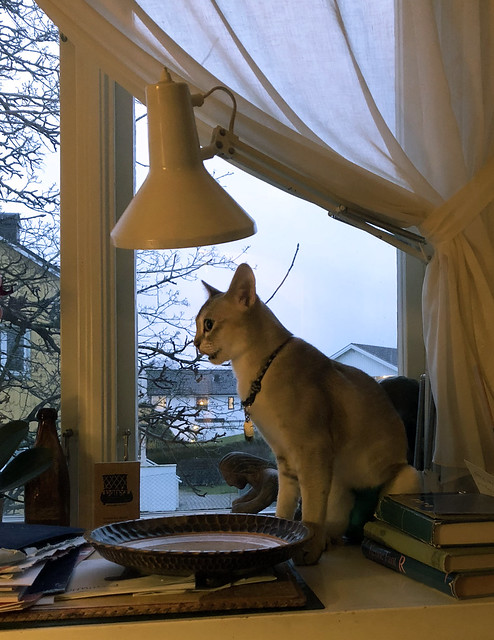 Jake had been to Björn’s mom’s house once before, but this was Logan’s first time. 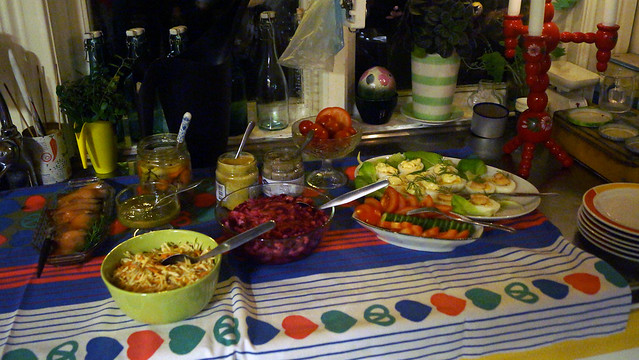 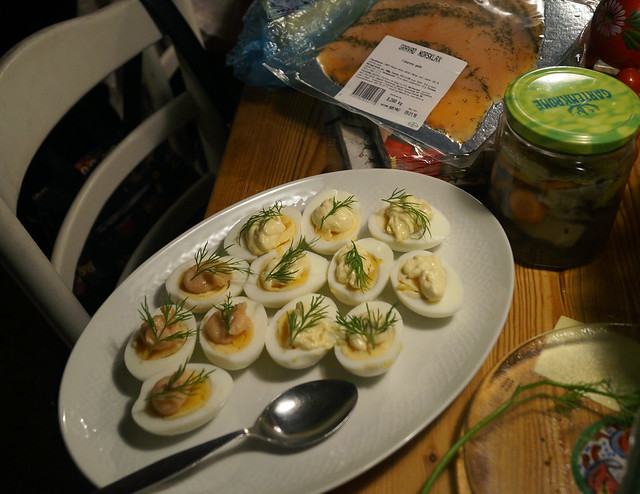 As I’ve said before, Björn&’s mom always made the perfect traditional Swedish Julbord, and it was marvellous. We had the cold courses (hard-boiled eggs with caviar, pickled herring, and smoked salmon)… 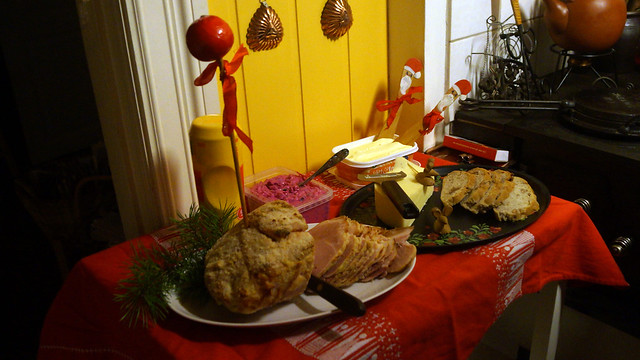 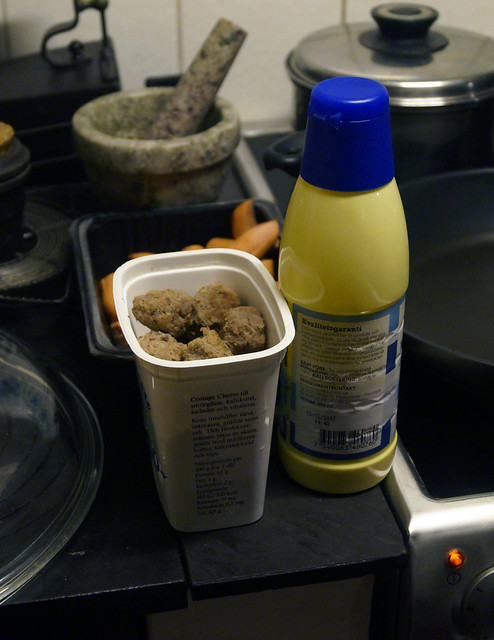 …prinskorv and meatballs (before cooking, here)… 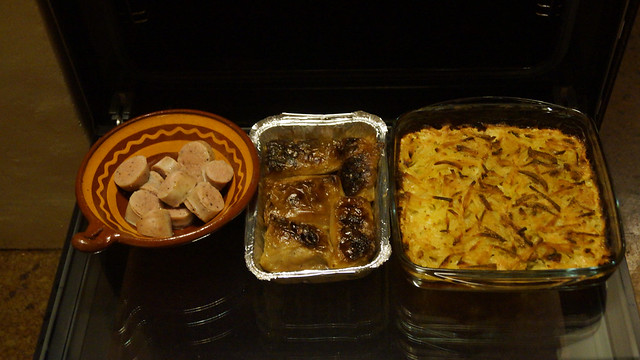 …and sausage, cabbage rolls and Janssons frestelse, which is basically scalloped potatoes that are julienned instead, with anchovies added. It’s delicious, I promise. 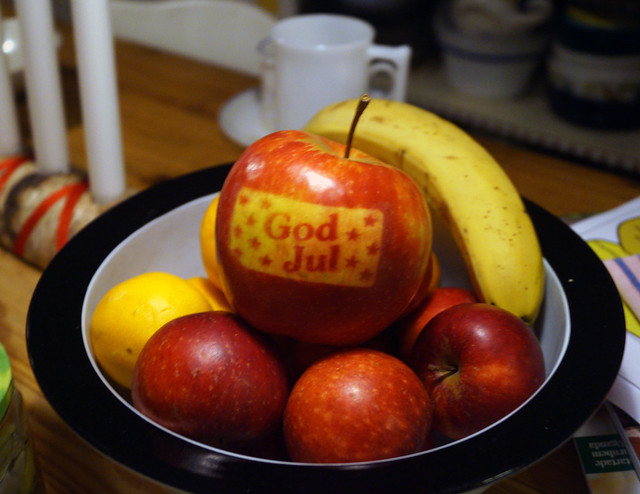 Anyway, I had found this special Jul apple at the grocery store, and brought it to Björn’s mom because I thought she’d like it. 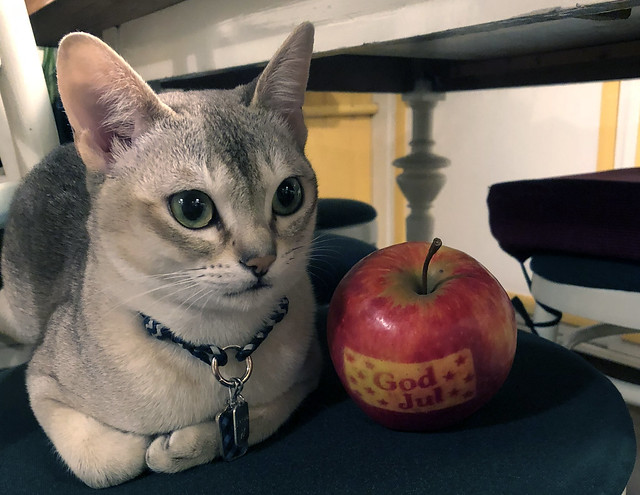 Christmas morning, Logan was sitting on a kitchen table chair, and he looked so cute I had to pose him with the apple. The rest is (Facebook) history.

Well…it’s been a memorable year, that’s for sure. 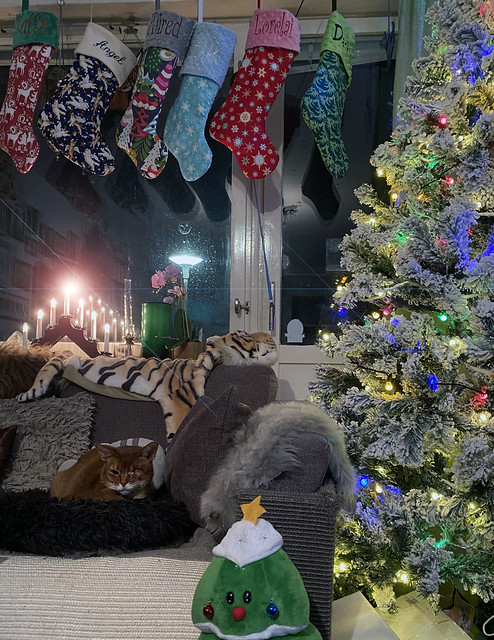 I don’t think I’ve ever experienced a year that so globally interesting. 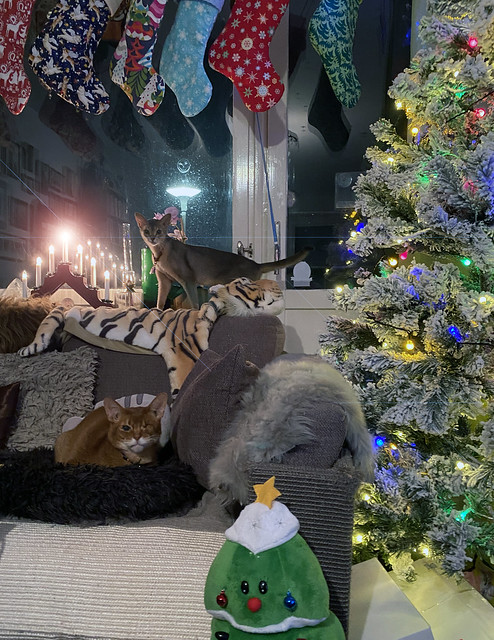 But enough of that…time to watch Kalle Anka and eat and drink too much. Happy Christmas and God Jul. 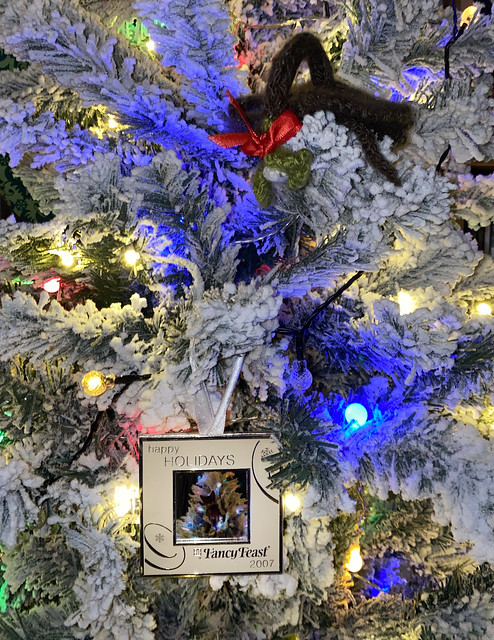 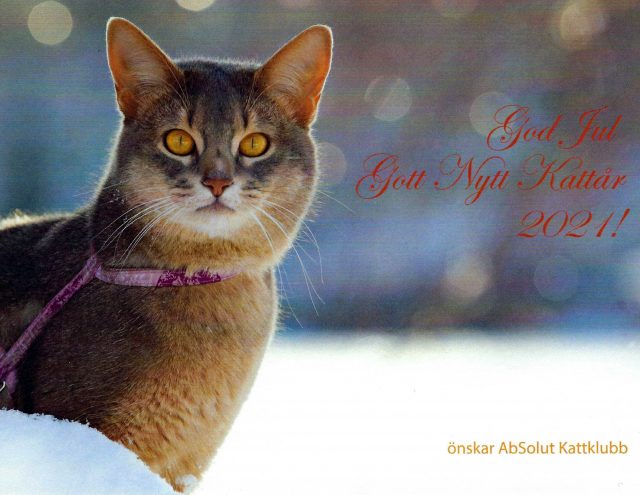 Okay. Now, I know these aren’t cartoons. But I have been working on colouring Dashiell Hamilton every day. I want to get the green of his suit just right, and it’s taking a lot longer than I thought…and I haven’t even started on colouring Dash himself! I am trying to do as much as I can in Procreate…but yesterday I got a new Paperlike screen protector, and let me tell you, it is a game changer! It really feels like I’m drawing on real paper, and it is so much better than drawing on glass. Even though it’s digital, it still feels organic. I’ve also ordered a set of Pen Tips, which should also improve the drawing experience. While Paperlike and Pen Tips ship worldwide, they are based in Germany and the Netherlands respectfully, so I don’t have to pay any import taxes!

Since Dash-Ham isn’t finished enough to post an update, I’m sharing some Christmas cards I’ve received. The above card arrived today from my Sverak club AbSolut Kattklubb. That is one lovely blue Somali.

This card came a couple of days ago from my friend Donna in Massachussetts. I think these Birmans are adorable. At least, I think they’re Birmans…hard to tell when you can’t see their feet!

This cute little Siamese postcard came today, also from Donna. I love that she keeps sending me postcards…it’s nice to have physical notes from friends sometimes, especially during a pandemic. 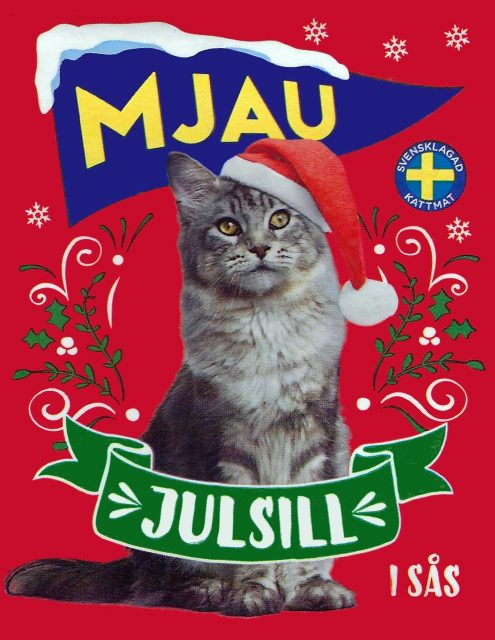 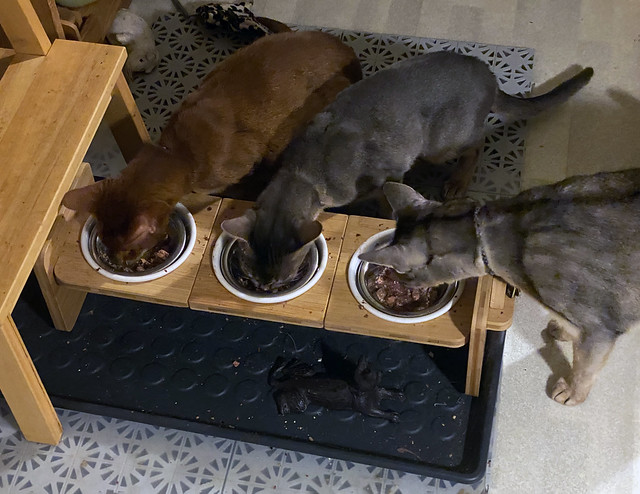 It’s made by Mjau, the “low-rent” version of Bozita, which I’ve mentioned before (Both Bozita and Mjau are made by Doggy AB in Vårgårda). The main difference between the two brands seems to be the range of flavours and the ingredients labels. Mjau lists “meat and animal by-products” and “fish and fish by-products,” with 4% actual herring. Bozita lists the specific animals used, and doesn’t include “by-products.” 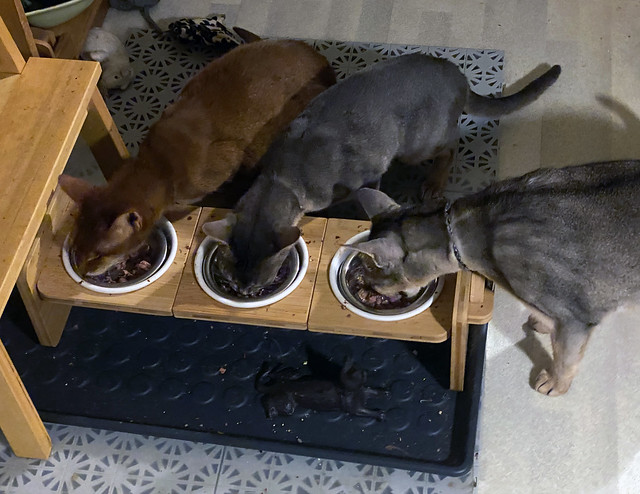 But do the cats mind if they get a little Julsill along with their raw? Apparently not…well, except maybe for Izaak. 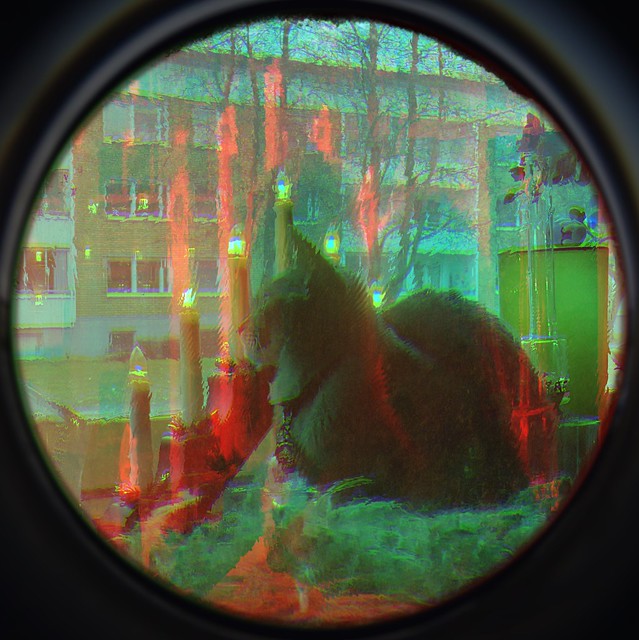 We’re putting up our Jul/Christmas decorations gradually this year, starting with the easiest things first. So first the wreath goes on our front door, and then we put the Julljusstaken in the windows. 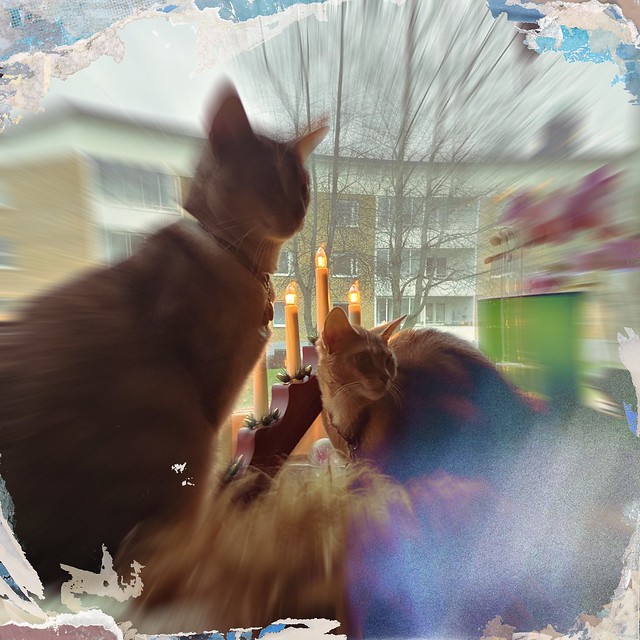 And, as always, it leads to some incredibly festive photos ops. 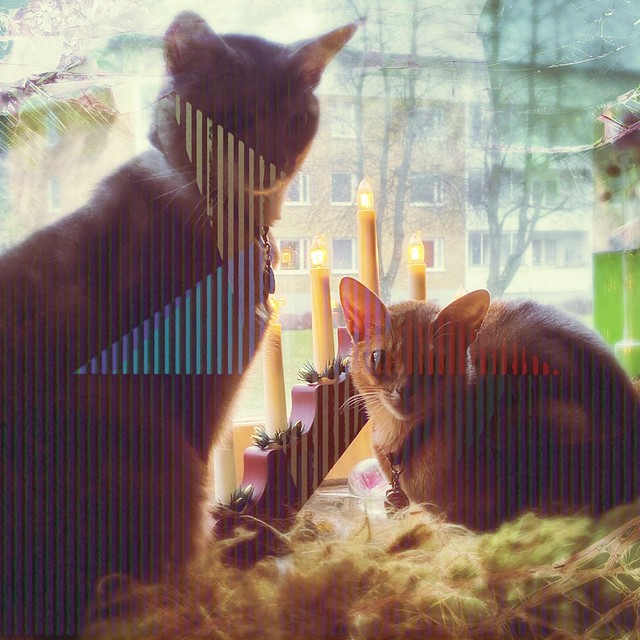 Pair the candles with Hipstamatic’s holiday-themed films and lenses, and you can have a lot of fun. This film is called “Vixen-chan.” 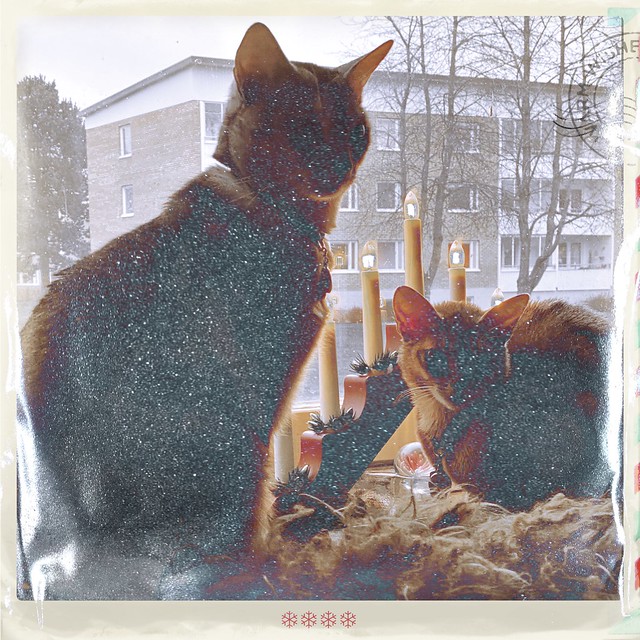 And this film is “Donner.” 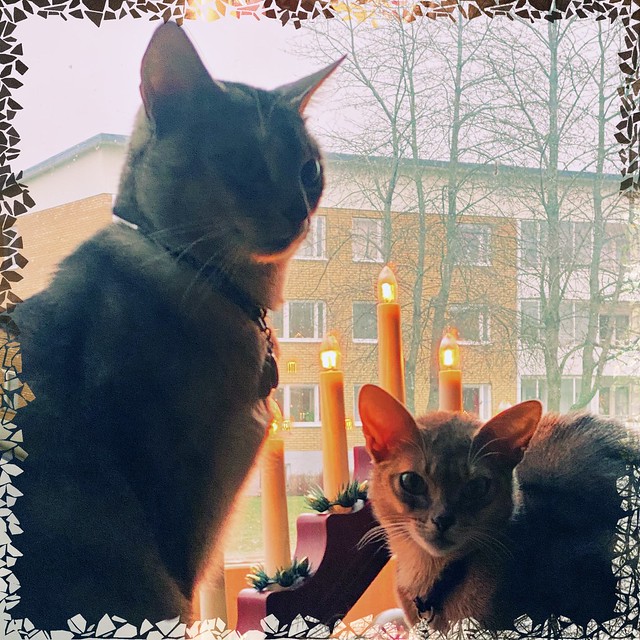 This last one isn’t one of the holiday films…but it feels Christmassy, don’t you think?

Hey there…remember us? Sorry it’s been a while…after we brought Dashiell home from Finland, I came down with, of all things, walking pneumonia! Björn and Kalle were sick with coughing, too…but of course, mine had to turn into pneumonia. 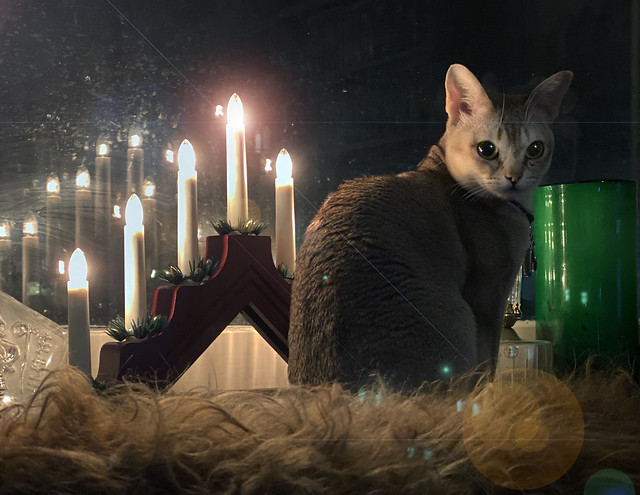 After that, we had a couple of little veterinary issues with some of the cats. Nothing major…Dash had an ear infection, Lorelai had a runny eye, and Alfred had an odd coughing spell. All of them are fine…but it was a lot to deal with all at once. I also had some other health issues in that space of time – nothing major, but between me and the cats, it was mentally and physically exhausting. Oh, and I also got a new iPhone 11 Pro, and getting the hang of the fancy camera took some practice (it’s awesome, by the way, better even than my DSLR). 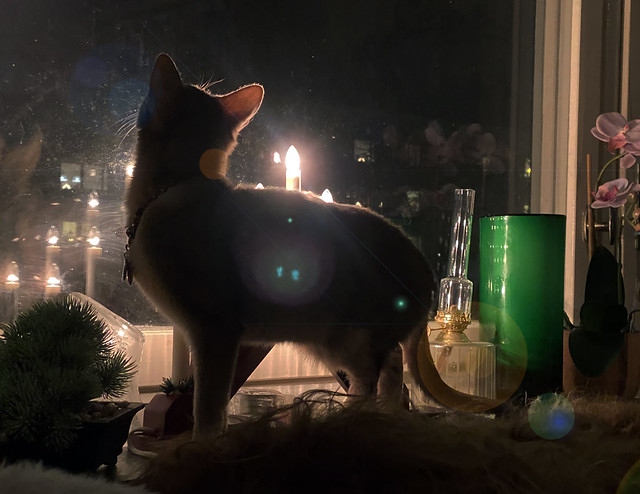 Then, of course, we had some cat shows, including one in Turku, Finland. We had entered Dash, but the entry cut-off was in October, and I wasn’t sure his ear would be completely recovered in time. Also, the show didn’t really count for him, and I didn’t want to risk the round-trip ferry ride to cause a relapse. So it was just Izaak and Rory. But they both earned their International Championship titles, and Zak was Nominated on the first day, so it was an excellent show. The very next weekend, we had the mini-show at our DjurMagazinet on Saturday with Zak, Rory and Zak, and then another of the photo shoots on Sunday with everyone. That was a five-ring circus! 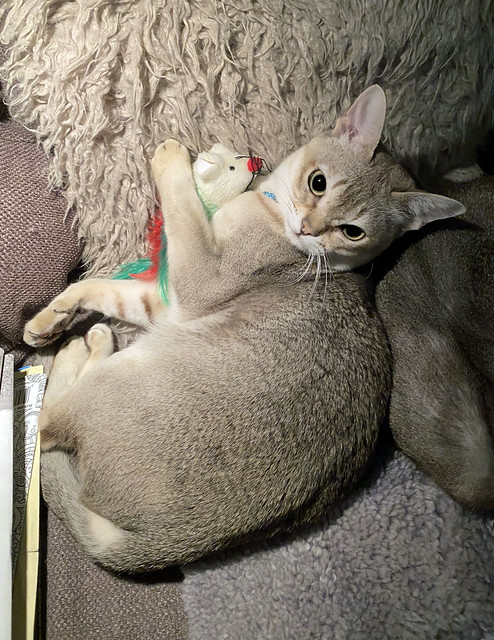 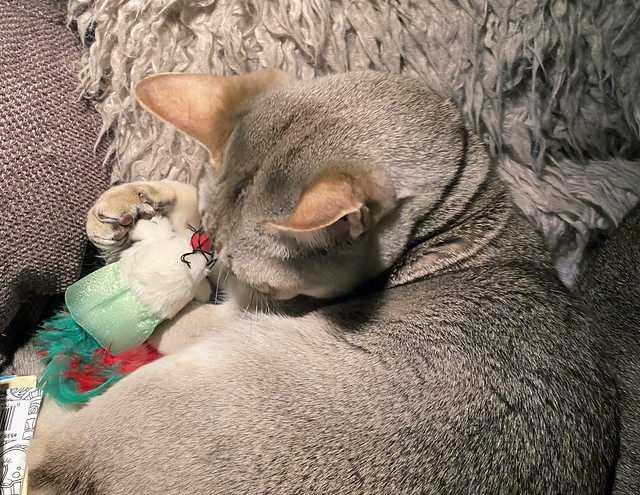 One thing that came of spending all day at a pet shop was that Zak picked out his very own new favourite mousie – a Christmas one that jingles! 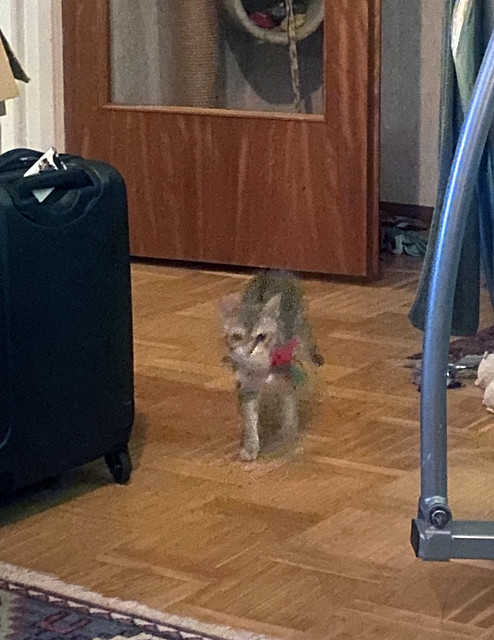 This is the best shot I could get of him fetching it. Sorry. I’m actually sick again right now with a staph infection, on antibiotics that make me nauseous…GREAT fun at Christmas! Oh, well…at least I won’t gain much holiday weight. The cute thing is that Zak’s been bringing his mousie to me over and over to distract me from the nausea. 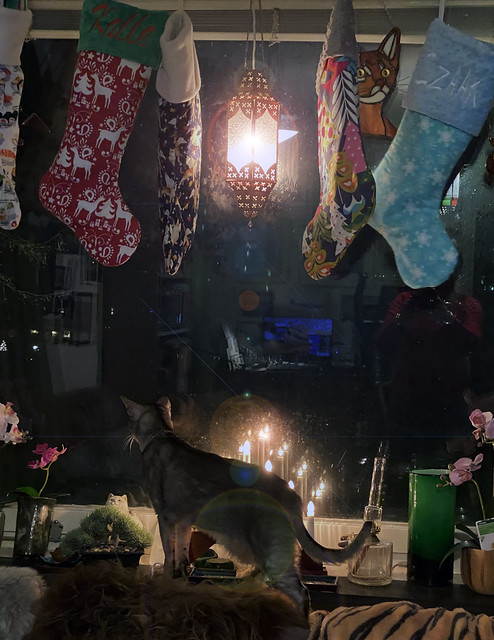 Because of all that, Christmas really kind of snuck up on us. We put up our Swedish window candles, and our wreath on the front door, but it wasn’t until Monday night that we put up the stockings. 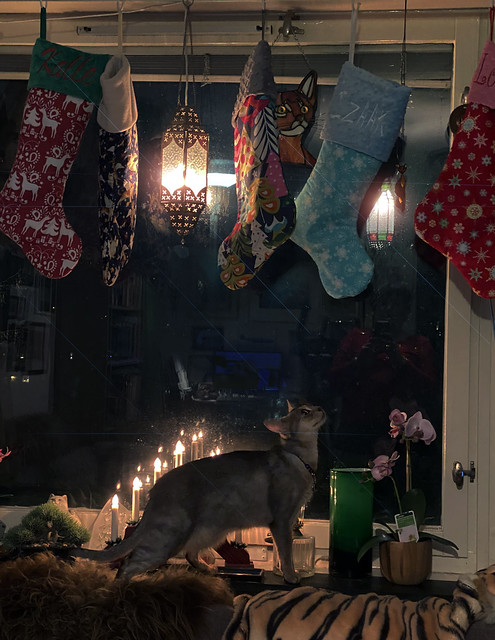 Not having Jacoby here had a bigger impact on my holiday cheer than I ever expected. He was always such a big part of my Christmases…even the one I spent away from him, in Sweden. I just couldn’t summon the energy to put up the tree and all our decorations. Yes, we have Angel, and Freddy, and Zak, and Rory and wonderful, wonderful Dash (who is friends with everyone)…but Christmas without Jake seems…strange. I’m sure it will be better next year. 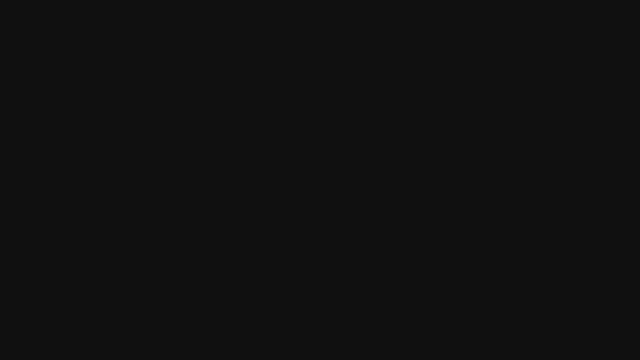 Which is not to say our Christmas is sad – not at all! After we put all the presents in the stockings, Freddy noticed that some of them had treats in them, and tried to get them down! Click on the unfortunate black square above to see the video in a new tab…sorry for the vertical orientation, but it was a sort of vertical situation. Also be warned that there is some rather bad language in the background; Channel Six was showing Die Hard for Jul, and they don’t censor movies on TV here.

I’ll be back next week, and, hopefully, The Daily Abyssinian with actually be daily again!