There are so many funny memories of Gun-Hee…including the time he stole butter. 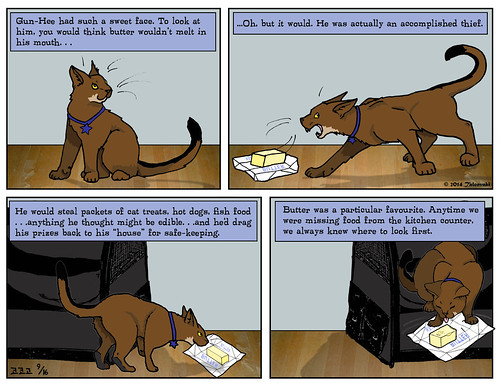 Today would have been his 8th birthday.

Today, September 16, would have been Gun-Hee’s 6th birthday.

He only had one birthday.

I brought him home some balloons for his birthday to see what he’d do.

I found a bunch of old photos of him that I used when I started this blog, when it was called “Gun-Hee a Day.” I started it in 2008 to see if I could post at least one photo, one story, one something every day for a whole year. I chose Gun-Hee as my subject because he was like Jacoby is now, always doing something that needed to be shared with the world.

I failed, of course, that first year. I tried again with Angel and Angel-a-Day, and I failed again. Then Jacoby showed up and the following year, 2010, I tried one more time, with this blog, The Daily Abyssinian, aka Aby-a-Day. And here we are.

These are all photos from Gun-Hee’s blog that I had on my Apple iDisk and saved when it was discontinued and turned off in favour of iCloud. They’re very small, because I didn’t have a lot of room to save photos on there. But I’d forgotten about some of these photos, so I’m happy to have found them. I know I have the full versions saved, somewhere…but they aren’t that much larger, I’m sure, because even then I had to keep my photos small because terabyte drives weren’t even invented until 2007, so I didn’t have one yet.

So here are some tiny little photos of Gun-Hee being Gun-Hee.

He was an amazing little cat. He confirmed all I ever dreamed life with an Abyssinian would be like, and he’s the absolute reason that this blog exists.

After he died, I had an artist on Etsy make a felted effigy of him using his own hair blended in with the mohair, silk, and sheep’s and alpaca’s wool. You can still see him if you search “Abyssinian Cat” on Etsy; she uses his sculpture as a model for a custom cat listing. I like that he’s on there. She calls him “Amber” but I know it’s really him – those are the same photos she sent me when she was making it for me. He sits in a glass case on a tall shelf in the bedroom, looking over me as I sleep.

I often wonder what Jake would have thought of Gun-Hee. I imagine they would have been the best of friends. I can’t imagine what trouble the pair of them would have gotten into, and the chaos they would have caused. Those two brains working together would have created some epic Aby mayhem.

Other times, I think Jake is Gun-Hee reincarnated, at least partly, but able to do things Gun-Hee couldn’t do. Like dogs. Jake’s never been afraid of dogs since the first time he met one, but Gun-Hee was scared of them. But Gun-Hee was a better jumper, and he was definitely better at running the Feline Agility course than Jake is! 🙂

They are both their father’s sons, that’s for sure.

Happy birthday, Gun-Hee…from me and from the brother you never met. We miss you.

I saw this graphic today.
It is, in a nutshell, what life with Gun-Hee is like.