Okay. Today was…weird. Strange. Mysterious. And not a little bit scary. It has many layers to it. It starts earlier this week, when I bought a used tricycle. 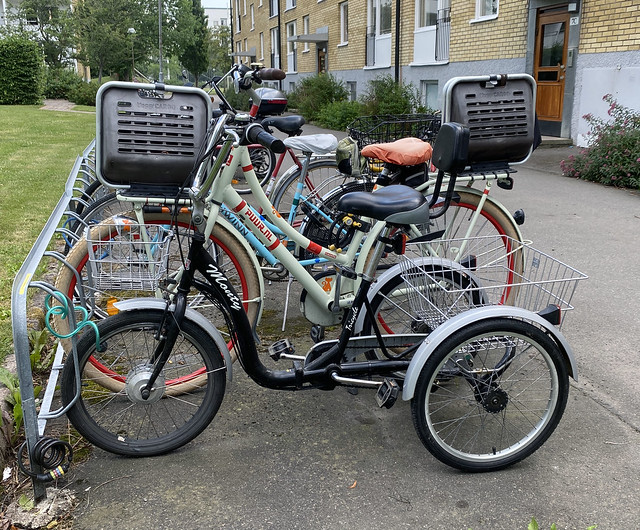 Since Covid, my balance is a bit off and my Dutch bike is getting harder to ride, especially when I am carrying things. But good tricycles are expensive, and cheap ones are…unpredictable. I’d been looking on a Swedish used item selling website, but there was nothing. Then, on Wednesday, I happened to check it again…and there was one listed, in Skövde, for only 2900 kr (about $300 USD – wicked cheap). The trike had been put up the day before, so it really was serendipity. He delivered it Thursday. It’s going to take a bit of practice to get the hand of riding it (bicycles and tricycles handle very differently) and it needs some lights and reflectors. 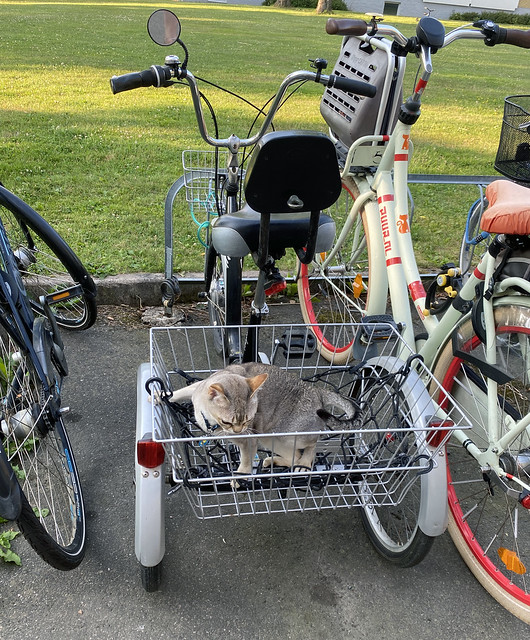 Another point: Björn is away on a weekend gaming trip, since everyone is vaccinated. Last night, I was on my own, so I ordered those lights and reflectors on Amazon.se. As part of this shopping, I went out twice after sunset to look at the trike to see what I needed and where I could mount things. When I went out, I got a lot of mosquito bites. I also ran into my upstairs neighbours, who told me they were going on a trip in the morning (this becomes important later). I fell asleep watching Hamilton, woke up at 4am, and went to bed. Woke up at 10, itching like crazy, and took some Benedryl. I was reading in the bedroom (it’s cooler there during the day than in the living room) and the Benedryl made me doze off. When I woke up, it was almost 4pm. 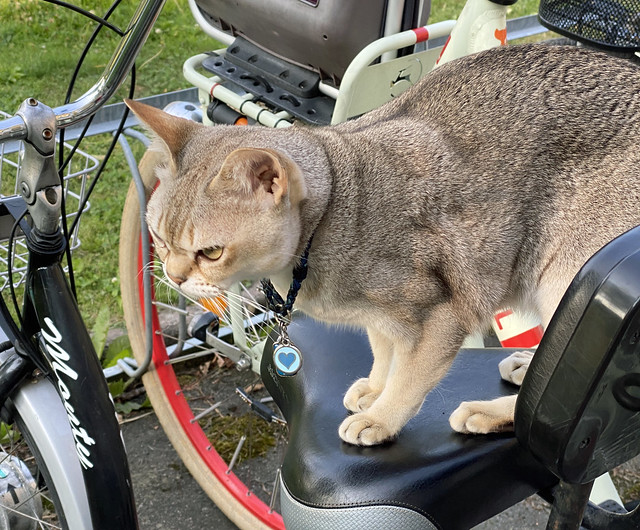 Which meant the cats’ breakfast was late. I immediately went to feed them. Izaak and Lorelai weren’t around, but that’s actually kind of normal for them; Zak has been hiding from me when I feed him, especially in the morning because he doesn’t want to be shut up in the bedroom, and Rory likes to hang out on the balcony and eats later. 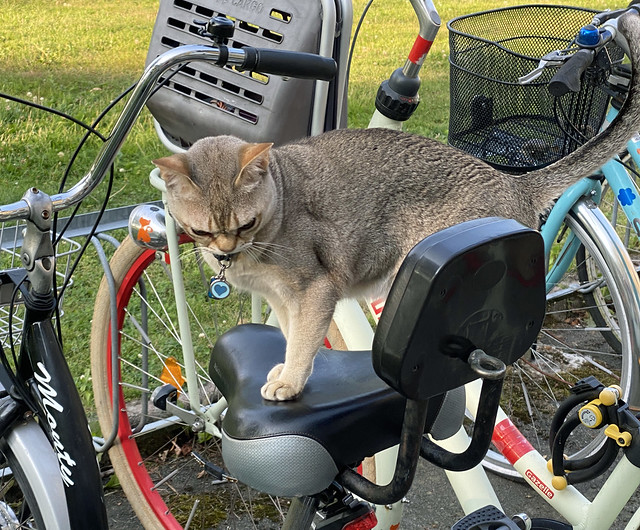 But it was bothering me. Afternoons, Rory sleeps on the end of the sofa, and Zak eventually comes out of hiding. Kalle and I searched the house; I had started a load of laundry and thought they might be shut in there, but they weren’t. Now I was getting worried. I started thinking they might be outside, but how? They didn’t get out when I went outside last night, because they were here for dinner. Around 5:30pm, I went outside, both to look for them and also to see if I could put the tail light back on the trike. As soon as I got to the trike, Zak appeared, yelling a blue streak! 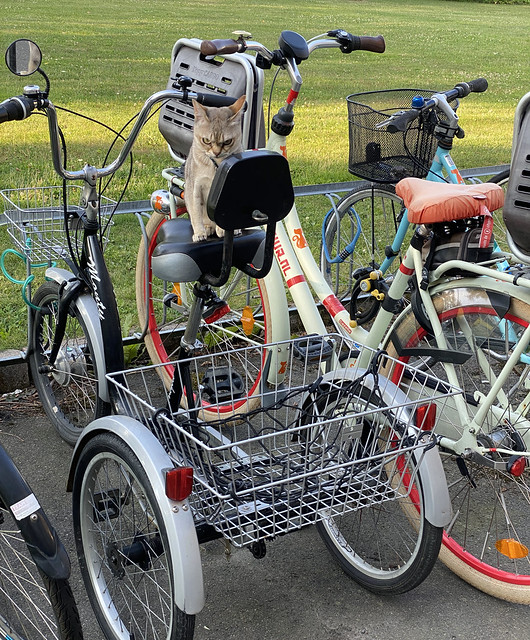 “WHERE HAVE YOU BEEN!? WHY WAS I OUTSIDE? WHERE WERE YOU!?” And I couldn’t answer that, because I have no idea. But that means Rory was probably outside, too. I put Zak back inside and Kalle and I scoured the område. Kalle suggested we check with the Anderssons, and I told him they’d gone on a trip this morning. We looked everywhere, but couldn’t find her…but it occurred to me that late afternoon is Rory’s nap time. WHen I messaged Björn about it, he thought she might be napping under some bushes in one of her favourite spots, like near the sandbox. So, we decided to wait for an hour and try again. Kalle mentioned that the door wasn’t locked when he went shopping; he had forgotten that until after we searched. Alfred, as you know, can open the front door if it’s not locked, and when the Anderssons load their car, they block the door open. Kalle and I started theorising: The door somehow was left unlocked (I don’t remember NOT locking it, but I don’t remember actually locking it, either) and Freddy opened it. Zak, Rory and Freddy go out in the hallway, and the front door is open because of the neighbours’ trip. The Anderssons see Freddy and put him inside, but they don’t see the other two. I also knew no one had found her; she’s pretty well known in the område and all the children know her by name. She has two ID tags and nobody had called or checked the Blanket ID site. 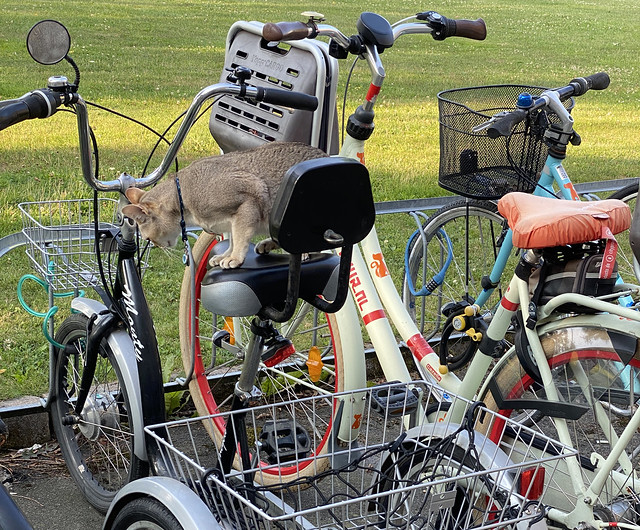 Kalle suggested taking Zak with us when we went out to look for Rory, and I had been thinking the same thing. So, Zak and I go out to find Rory and Kalle was still getting ready…but there Rory was, right at the door, waiting to be let in! I have no idea when they got out, how long they’d been out, where they went…nothing. Just our theory of events, at least until the Anderssons get home. But, this shows that taking them outside often and in all seasons is a VERY good thing, because they know where they live. A lot of indoor cats don’t learn that, so if they do escape, they are easily disoriented and don’t know how to get home.

Epilouge: The Anderssons didn’t see the cats this morning. I just messaged Oksana, and she didn’t see Freddy, Zak or Rory this morning. The mystery continues. So much for all that CSI I’ve watched in my life.

This weekend’s CFA show, hosted by the Half-Moon Cat Club, was held at the Holiday Inn in Mansfield. This is one of my favourite shows to go to; it’s a nice place, the hotel restaurant is awesome, and it’s really easy to get to by MBTA Commuter Rail and the hotel’s shuttle. You don’t have to stay at the hotel to use their shuttle service, which is excellent. But it’s also where we ran into a little trouble. You see, the train only comes in two hour intervals, and the show ended and we were packed up with only a little time to spare before the 5:24pm train back to Boston was scheduled. And those trains don’t wait around if you’re late. Oh, sure, they’re late all the time, but if you’re a passenger they’re merciless..

So after the show was over, Jacoby and I had enough time to get the shuttle to the station – it isn’t far at all – but we only had just enough time to get there. The girl at the front desk called the shuttle driver, we went outside, and… Nothing happened. Nobody came. I could see the van, parked a ways away across the parking lot, but I didn’t see anyone inside. My husband called to see if I was at the station yet, and I told him no, but almost – I was waiting for the shuttle.

Then I noticed someone was in the van. Okay, so he’s just getting in, he’s coming, it’s all good…except it wasn’t. Nothing happened.

Finally I noticed he was…waving? at me. I looked down at my duffle, laptop, my showcage bag, and Jake’s bag on the bench, then looked at the van and sighed. I thought they were supposed to come up under the canopy, but okay. My rolling duffle bag doesn’t have great balance by itself and I had the showcage bag attached, and while I was dragging my things to the van, I went over a crack in the pavement and the bag tipped over. It was heavy and awkward to get straightened out, and I ended up almost tearing off a toenail in the process. Meanwhile, the guy is still sitting in the van’s driver’s seat.

I’m starting to have a bad feeling about this…I finally get the bag upright again, slinging the showcage bag over a shoulder instead, and walk over the the van’s side door and try to open it. It’s locked. Finally, Mr. Helpful opened his door, walked around the other side of the van, went to the back and said, “You wanna bring this back here?”

Really? I walked to the back and stood there a moment; he didn’t offer to help me with my bag, let alone lift it for me, until I kind of looked at him. “I didn’t realise you were here,” I said. I thought you guys came up to the door.” I think he may have grunted. Then I asked, “Do we still have time to get the to the MBTA Commuter Rail stop? I need to catch the train at 5:24.” With all the trying to get my bag over there, I didn’t know what time it was.

He looked at me like I was stupid and said, “No. You missed it.” Then he started to lift my bag.

“I missed it? Are you kidding me?” I know know what you call his response; it was kind of like a shrug, but with more apathy. “You know what? Never mind. The next train isn’t for another two hours. When I came out to wait, I had time to make the 5:24.”

I was not happy. I went back to the front desk to ask for a manager. When she came out, I told her the whole story. And then I called my husband to come pick me up. The whole point of going to shows at Mansfield is that I can take the train for them and not have to rely on anyone to drive me, so I was a little annoyed. She told me that the shuttle driver was supposed to come to the door, and I was standing in the right place; the driver was absolutely meant to offer to help me with my bags, especially when I was travelling with a lot of stuff and/or a pet (and I had both). She said everything he’d done was unacceptable and that she would find him and talk to him.

She also offered to pay for dinner for both me and my husband, which she didn’t have to do…but I love their restaurant so I accepted.

It takes about an hour to drive from Boston to Mansfield, so I settled in by an outlet with Jacoby.

I was attended by George from the restaurant, who not only took my order and brought me seltzer, but he even brought Jake some hamburger to eat while we were waiting!

And fish crackers, too.

So even though we had to wait a little longer to get home, we had a pretty nice time. Fish crackers, like cats, make everything better.