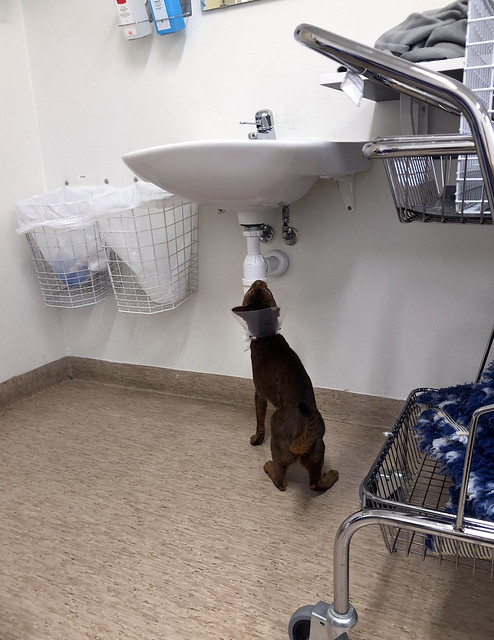 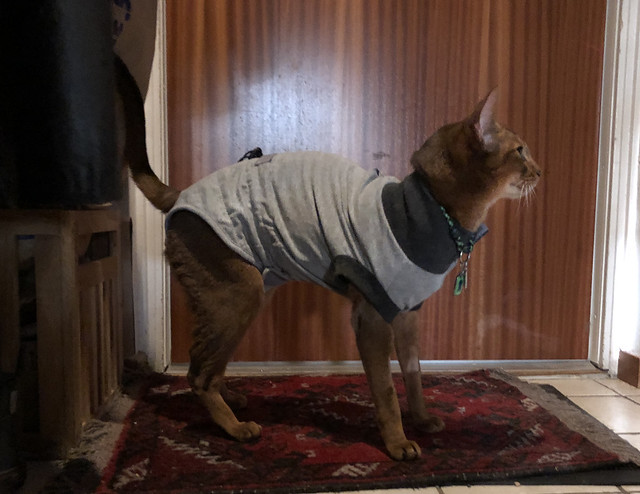 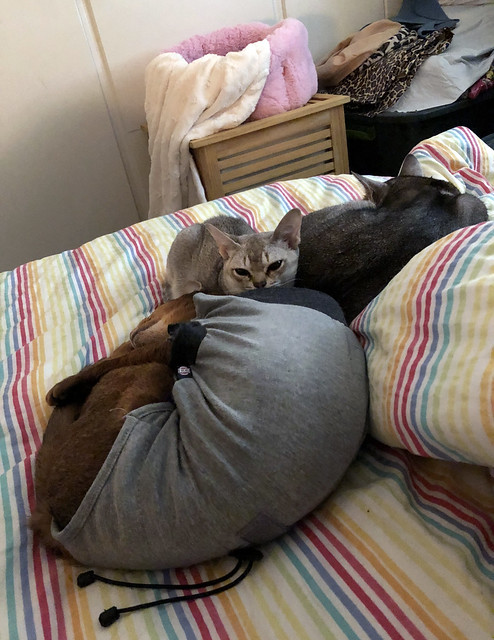 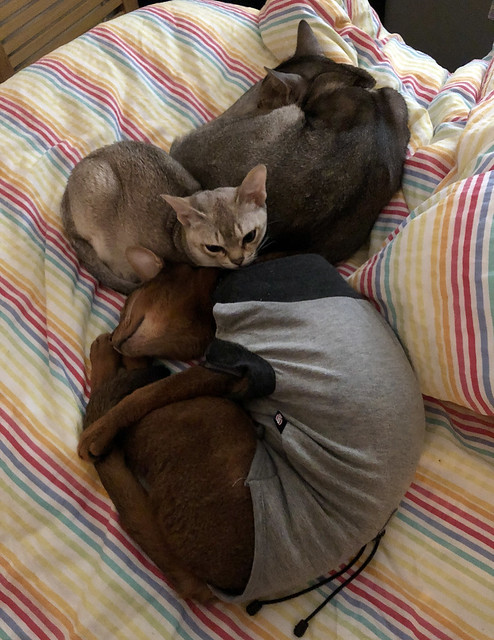 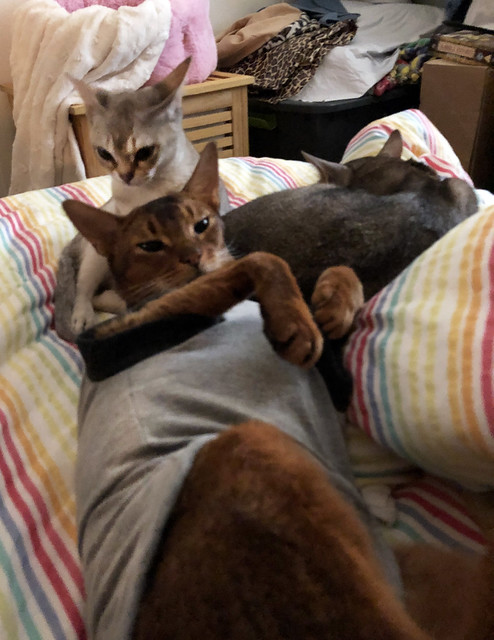 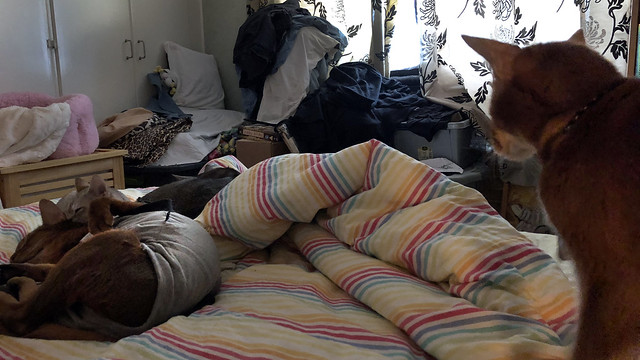 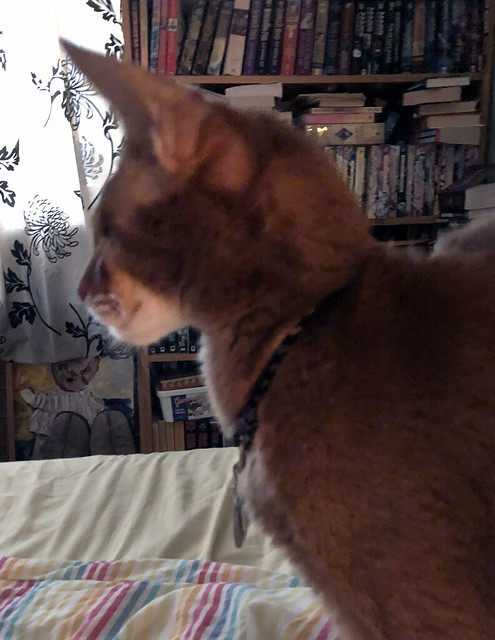 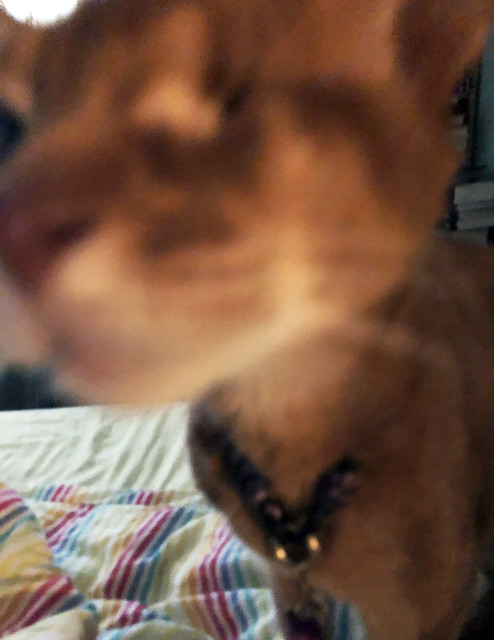 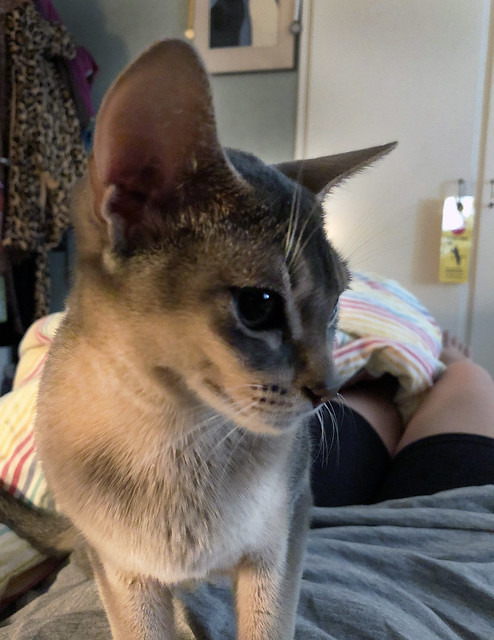 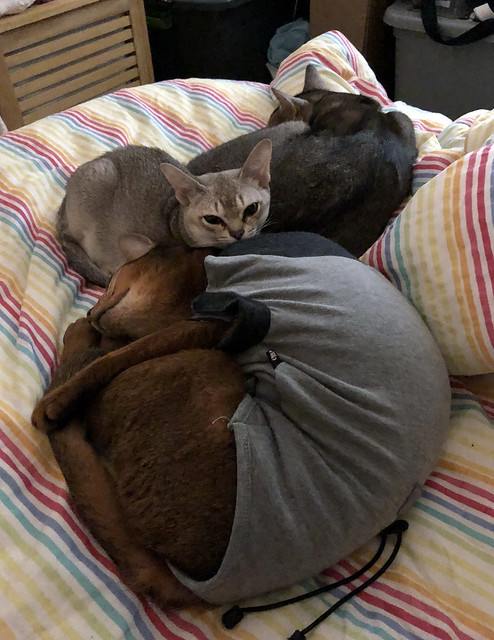 We are very lucky in that we live extremely close to a very good pet supplies store. Skövde’s DjurMagazinet is the equivalent of five Boston blocks from our apartment. 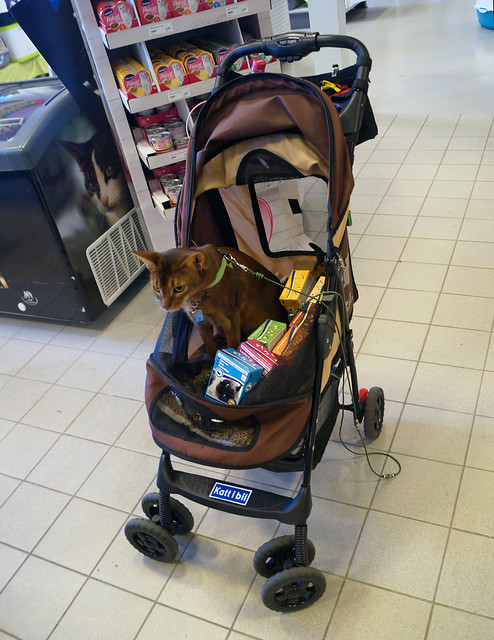 And they carry almost everything we need. The rest we can order online. 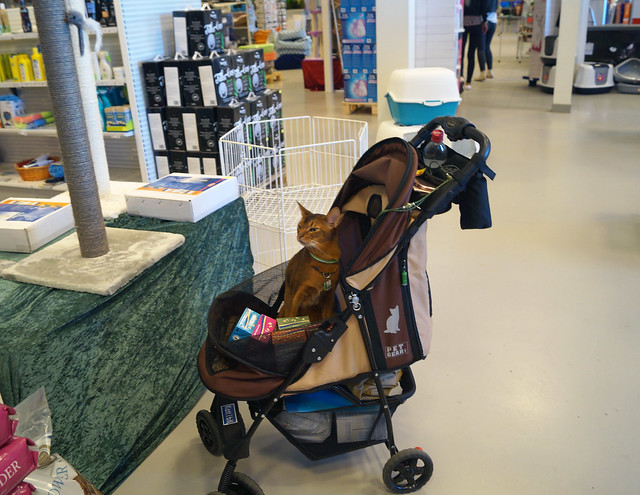 But they have our Bozita, our Vaisto raw, and everything else we need on a regular basis. 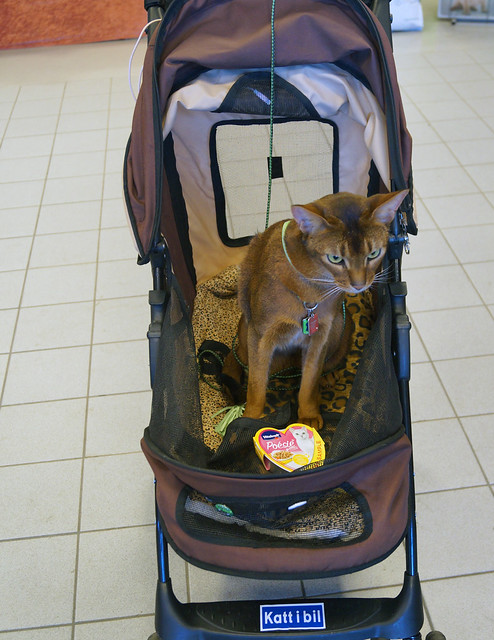 And of course they welcome pet visitors. And you know how Jacoby loves to help me shop. 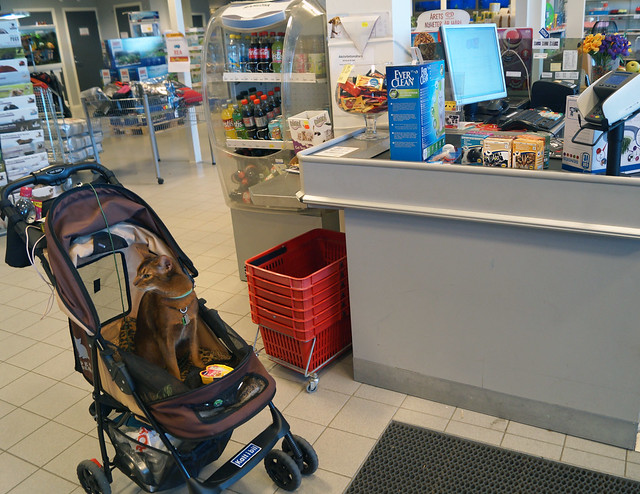 He always makes sure we have gotten everything we need before we pay. 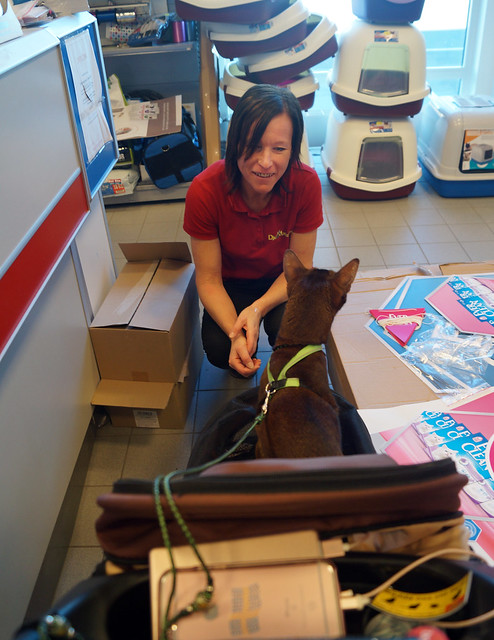 The staff all know Jake, of course. 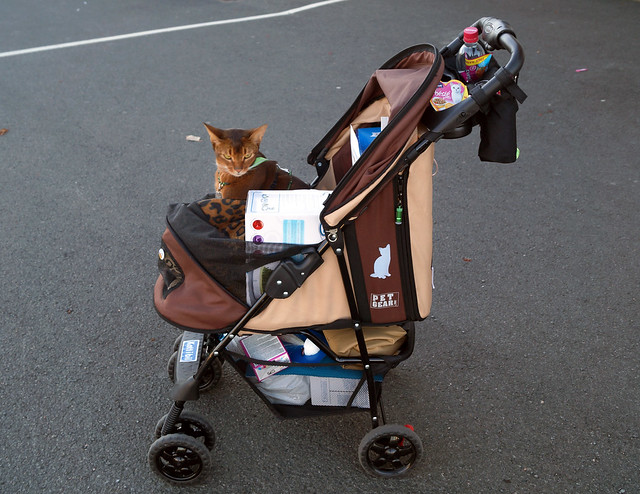 So the pet store that has four Abyssinian kittens which I posted about yesterday responded to me through Facebook. Here is what they said:

“Dear Madam,
Unfortunately, I can’t answer what you would like to read. But we can guarantee the staff from our store (we spoke to Lognes since the first message) is taking care of them. They receive affection and caresses. The little brothers sleep together and they are safe every night.
You must know that your message has been transmitted to the people concerned in our company.
Best regards”

(They have this stock photo of Aby kittens on their Facebook page, too.)

So, basically, no answer at all. Abyfriend Max (she was Moose E. Puss‘s human) beat me to a response, and commented, “These little brothers are left alone together, in a cage, in a closed shop at night, for how many hours???!!!! Not acceptable.” So far, they haven’t responded to that.

I also responded: “Be that as it may…these poor kittens are not getting the socialisation they desperately need. And what will happen if they are not sold (at €1100 each, this is a distinct possibility) and they are no longer cute little kittens but rangy adolescents? Will the breeder take them back? Will you keep them until they do sell, whenever that is, no matter how old they are? What happens if they don’t sell until they become adults? And that doesn’t even begin to cover what happens to them if they ARE sold to someone who has no idea what Abyssinians are like. They’re not exactly like other cats, and they have some traits and habits that, if one isn’t prepared for them, can be difficult to handle. Do you follow the care of the kittens once they ARE adopted? Will you take them back if the people who buy them decide they cannot handle their quirks? Or will the purchasers end up dumping these kittens in an animal shelter? This is a question for ALL cats and dogs being sold in pet shops, but Abyssinians are my breed and I know them well…and I know they are NOT meant to live in a cage with little human interaction.”

And, shockingly, I know, they haven’t responded to that, either.

Yes, you read that right…Gilles posted to the Abyssinian Cat Club on Facebook about a litter of four Aby kittens he saw in a pet store at the Animalis store in Lognes, France (a suburb of Paris).

Gilles wrote: “As I was shopping for a new tree for my Master Aby, I saw that the pet store was selling Abys. I felt worse than usual for the kittens. Considering the requested price (1100 Euros, I let you do the maths for your local currency) I couldn’t help but wonder what was to become of them in the near future as [that price] corresponds to the average monthly paycheck [in this area]…I wish I could have taken all 4 of them but Master would not have been happy.
I just hope they’ll end up in a loving and caring family.”

I commented on their Facebook page with : “Purebred Abyssinians should not be sold in a pet shop. Who is their breeder? Abys need human interaction, not to be locked in a cage… What happens to these poor kittens at night when your shop closes? I think you will get a lot of posts today from all over the world about these Abys.” and they actually responded to me! They said: ” Hello, We know Abys are special and many measures were taken to welcome these kittens in the best conditions. You must be sure our staff is professional but also loving and they take care of them!”

Okay…but…that didn’t really answer my question. So I wrote back: “But at night they still sleep in a cage, and not with people…c’est vrai, ça, non?” (I threw in a little French so they wouldn’t think I was a rude American)…they haven’t responded to that yet.

Others from the Aby Facebook Club posted comments on their Facebook page, too. Helen Warn wrote: “Is it true that you are selling purebred Abyssinian kittens? If so, what is the name of the breeder?” and their response to her was, “You can call our Store at Lognes to get this information those kittens were borned in France in the 62th department. You can come and visit the kittens, talk to our staff, they’ll be happy to guide you and answer all of your questions: Animalis Lognes, ZAC du Mandinet – Allée des Palombes 77185 Lognes 0160950400”

Gilles did manage to discover who the breeder is: Bertand Grumetz, cattery name De La Planquette. He’s a breeder from the north of France and he’s registered with LOOF (Livre Officiel des Origines Félins), but he doesn’t seem to have a website. Evidently, he had a best kitten who won Best Variety last year:

That’s all the information I’ve been able to gather…but doesn’t this kitten look sad? When I saw two Aby kittens in a pet store in 2006, they at least looked happy. Of course, we didn’t have camera phones or Facebook back then (the phone I had back then wouldn’t even work in Asia!), so there was little I could about them…but Abys – any cats, really – should not be sold in pet stores. If this makes you as sad as it made Gilles and it makes me…why not stop by Animalis’ Facebook page and ask them about these kittens?

The saddest part is, even if someone could afford the €4400 to “rescue” these kittens, it would only encourage the pet store – and the breeder – to continue selling purebred Abys in pet stores. I just hope everything turns out well for these little guys.