Five years ago today, I posted about Jacoby and a plushie made in his likeness by Avanii on DeviantArt. 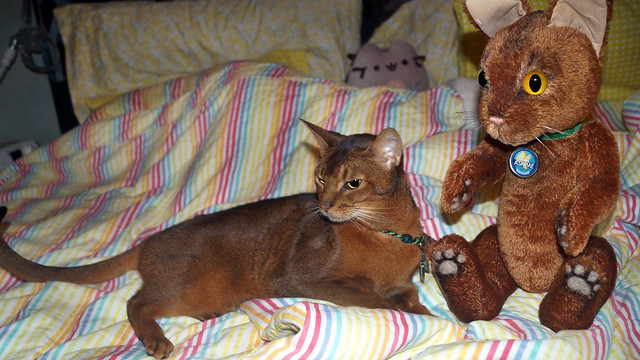 We still have both Jake and his plushie simulacrum. 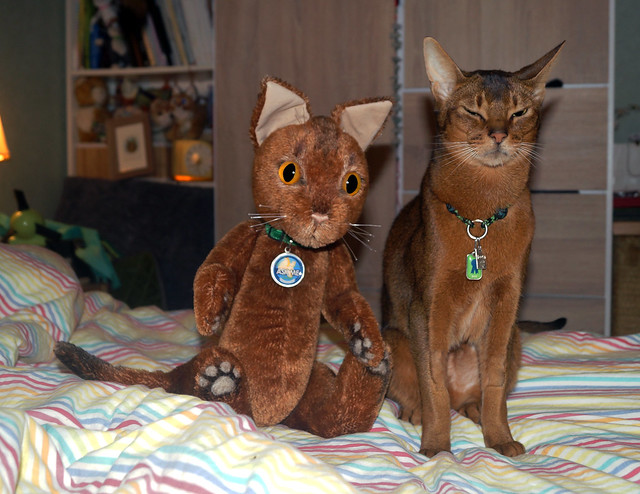 I fixed the ears to make them more upright and less…floppy. 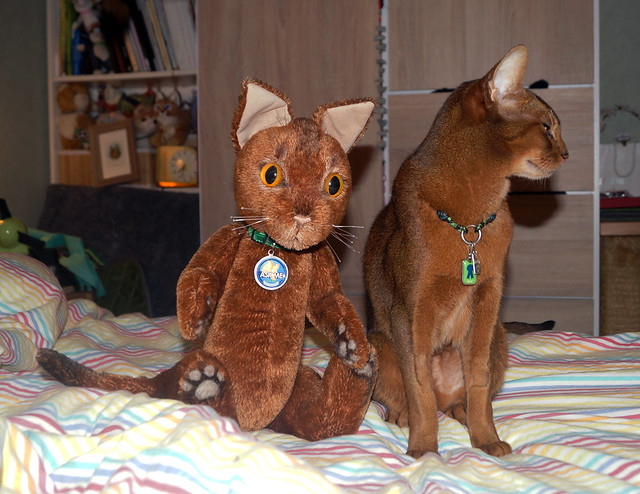 Jake seems to be slightly envious of his alter-ego… 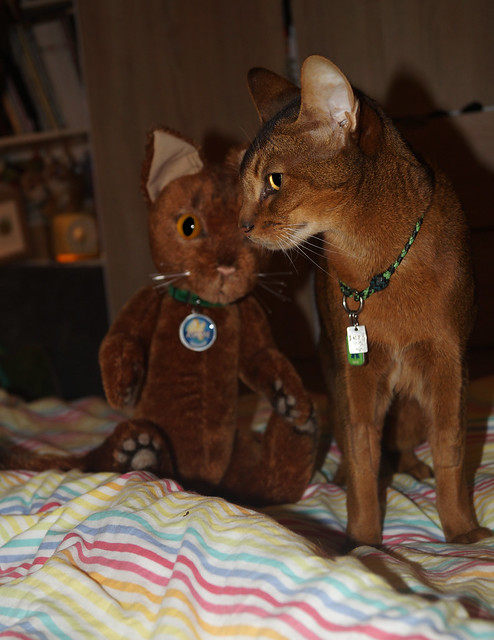 ….But he posed nicely with it when I took some five-year commemorative photos of Jake and his alter-ego. 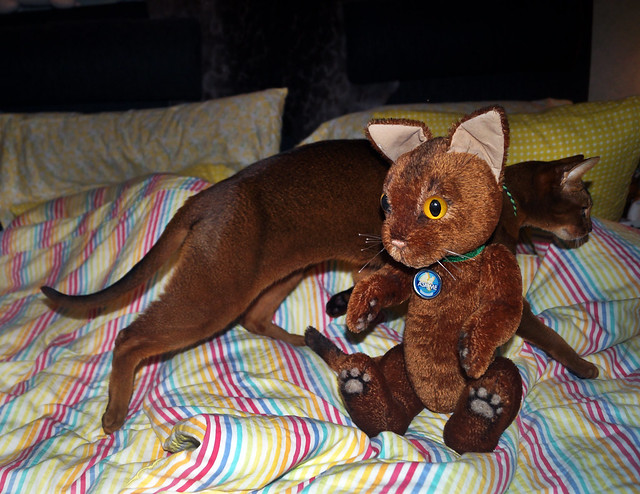 Back before the Big Reveal, back when I used to have time to spend 16 hours plus in Photoshop working on a cartoon…I used to make plushies. Specifically, plushie cats. 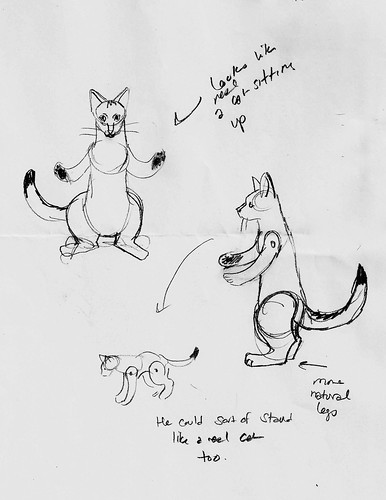 I was working on the perfect Jacoby doll. The problem is, I don’t really know how to make patterns. I can work with them, I can modify them…but I can’t make them from scratch. I was working on a couple of jointed doll concepts…but I have no idea how to implement them. 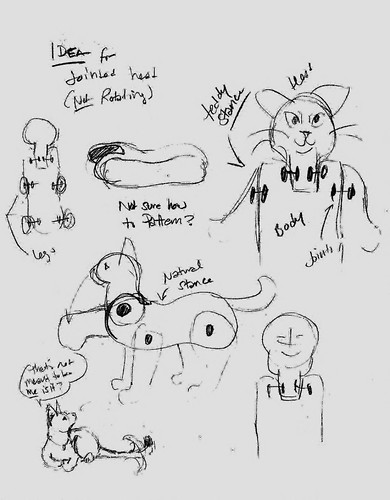 Someday I’ll learn how. But for now, I have these idea sketches.

As part of my Jake plushie project (which is on temporary hiatus due to moving), I bought a toy stroller. It’s been stashed away, and because of moving I got it out and set it up to remind myself of its size.

I turned my back on it for a second…and guess what happened!

A certain someone just hopped right on in.

And just as pleased as punch about it, too. Look how proud of himself Jacoby is.

He sat there for a long time, too, waiting for someone to notice him and give him a push.

“Well! Finally! It’s about time you got here, Dad!”

Jake stayed in the stroller a long time, too, demanding to be pushed. Top up or down, made no difference to him.

Just goes to show you, when you’re a true Strollercat, it doesn’t matter how big or small your stroller actually is.

For Christmas this year, I made a Somali plushie for Sparkle.

I used a really cute pattern I found on DeviantArt by Kapuschati for the body and tail.

I used a different pattern for the head, though.

I thought the tail on this pattern would be fun to make on a Somali.

I know how hard it is to find stuffed Abys, so I thought Sparkle’s human would really appreciate a plush Somali.

What was not appreciated was my taking photos of something other than Jacoby.

He hates when I do that.

He heard the camera shutter and had to come check it out.

And, of course, deflect the attention from the plushie to something more important.

He always needs to be in the photos.

At least until something better to do comes along.

Last week, Jacoby and I got to the show hall early to help set it up for our club’s cat show. I’d never helped set up a show before. First, Jake and I checked in and went up to our room to put things away.

Then we went downstairs to the show hall. It was so big and empty!

I brought Jake along to help because I thought he’d be happier down in the hall with me rather than alone in our room.

I was definitely right!

He just sat in his stroller and supervised the goings-on. He also helped introduce everyone to Marlin, our mascot, whom no one had actually seen in person yet.

(Here’s me and Marlin, just for fun.)

Of course, it was very busy in the empty hall, with people making noise and moving things around, setting up tables and cages and everything else. There was also a big door open so the truck could unload.

Jake just hung out with members like Amelia and took it all in stride.

Jake did help where he could. Here he is helping count items and fill the goodie bags that were given to each exhibitor. He was very good and didn’t get into any of the bags or steal any of the catnip!

He also helped with decorations. We had two out of three of Columbus’ ships on hand to enhance our holiday theme.

He had a lot of fun playing with them…

…until he got bored and decided to go do something else!

We ended up putting Marlin, in his Nemo costume on one of the boats and set it at the front door where he could greet everyone as they came in.

One really nice thing about being there early to help set up is that you also get your benching area the night before instead of having to do it in the morning! While I was setting up his house, Jake curled up inside the bag, nestling in between the hammocks. I think he was getting a little chilly.

Once his house was all set up, Jake hopped in to check it out and make sure it was all done correctly and to his satisfaction. Needless to say, he approved.

I’m a founding member of the New England Meow Outfit (NEMO), the newest CFA cat club in North America, and as I mentioned a month or so ago, we’re putting on our very first cat show next weekend.

I’m the recording secretary and resident artist, and I designed our logo: a Maine Coon cat holding a clownfish. His name is Marlin, and he adorns many different items in our Zazzle shop (we’re non-profit, and this is actually one of our fundraisers).

But since Marlin is my baby, I couldn’t be happy with him only existing in two dimensions. So I made a stuffed Marlin.

I got super lucky with the fabric – I found the absolutely perfect cream longhaired fabric at a shop online, and I used a blend of different patterns to fit the Maneki Neko pose I drew him in.

The sitting body is taken from the pattern I used to make the plush Angel. The head and the arms are taken from two different teddy patterns I’ve used to make different Jacoby plushies. The fish is a commercial one I found on Amazon.

His eyes glow in the dark, too.

Of course, I’m not allowed to take photos of anything that doesn’t include Jacoby.

Marlin’s a pretty good size, too; you can see how big he is compared to Jake.

We’re also having a costume contest at the show, and my friend Iris found a Finding Nemo pet Halloween costume at Petsmart. Well, of course I had to get one for Jake…

I hope he forgives Iris…someday.

However, the costume wasn’t a total bust. Look who it DOES fit!

Isn’t it nice when everything works out?

Jacoby is such a helpful cat!

He’s always right there helping while I’m working on projects.

He either sits on a box next to my sewing machine, or…

…he’s helping me hold my fabric down on the floor.

As you can see, it’s necessary to cover as much of the fabric as possible so that it doesn’t escape.

It’s not always an exciting job.

But, as they say, somebody’s gotta do it!