The other day, I noticed Lorelai had lost her collar somewhere in the apartment. 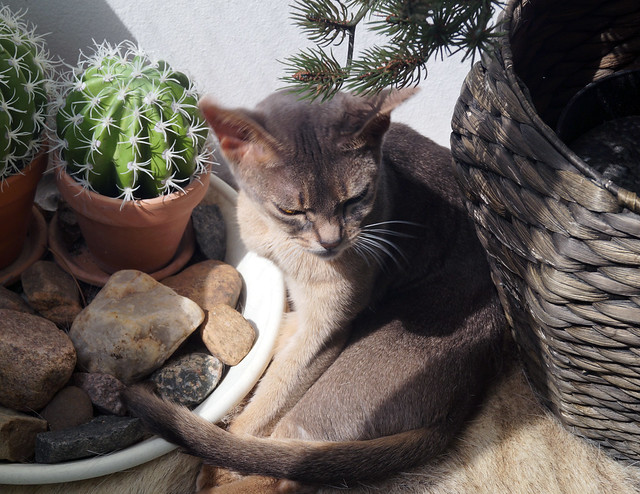 This happens from time to time…the collars I have been using for almost ten years, made by Etsy seller Hi Tide Creations, are wonderful, light and…just one piece. 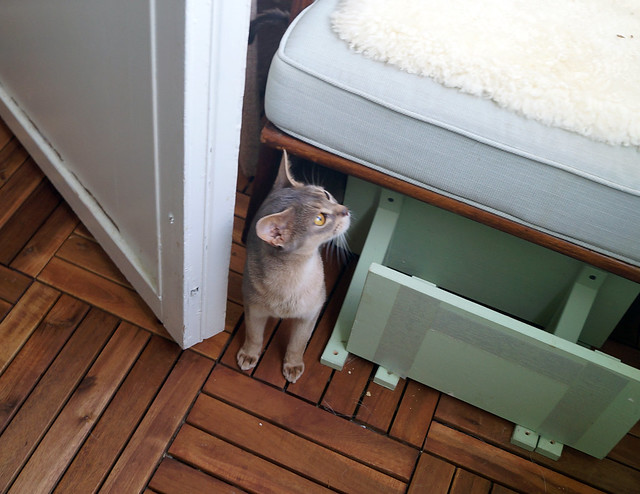 Most people would recommend against a non-breakaway collar for a cat, but I have always had collars on my cats. The Tag Collars are the best because they are lightweight…and escapable. 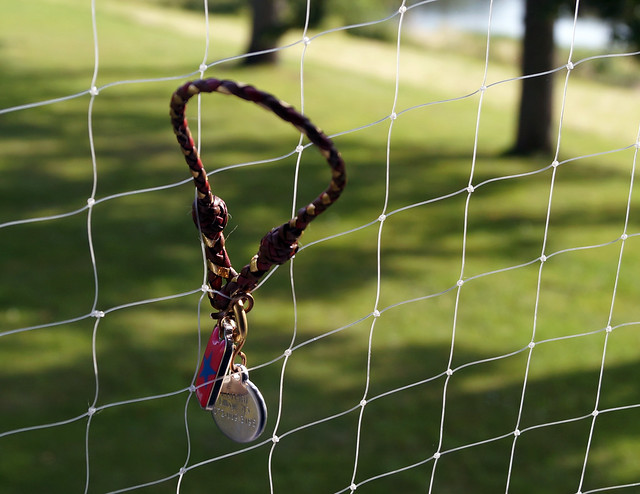 I finally found Rory’s collar…caught in the cat-proof netting on our balcony. And that’s why these collars are so wonderful. Rory got her collar caught in something, but she was able to get out of it. Collars don’t need to be breakaway…they just need to be escapable in case of emergency. 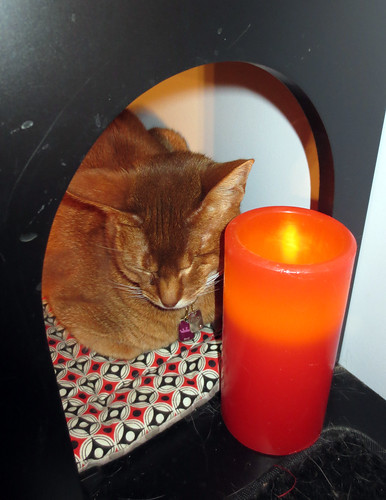 Because we have two Abyssinians in the house, we don’t have real candles. At Christmastime, we use battery-operated fake candles. 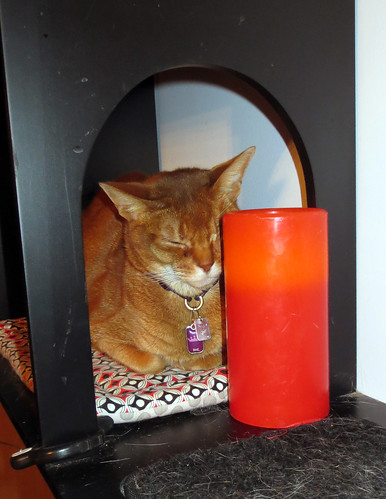 Some of these candles are pretty nice. This one is covered with real wax and actually smells a little bit like a bayberry candle. Okay, so they’re not as nice and warm as real candles, but they do have one distinct advantage. 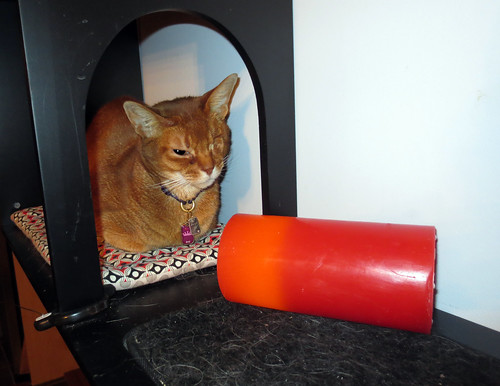 When they fall over, nothing catches on fire and there isn’t any hot melted wax to deal with.

I am angry. Very, very angry. I do plan on calling someone tomorrow, too…just as soon as I figure out who to call.

We took Jacoby and Angel out to the parks along the Harborwalk today. Angel actually did amazingly well outside on her leash.

However, we actually had a really hard time finding a place to let the cats explore, because so many people were playing with their dogs.

The Harborwalk is NOT a dog park. It doesn’t have a dog park. Perhaps it should have one, a designated dog park, but right now, it doesn’t. And Boston city law is very clear on the leashing of dogs.

We were at Binford Park when, suddenly and out of nowhere, a strange dog just appeared next to our stroller!

It looked like a Rottweiler mixed with Lab and Pit Bull, and it was wearing a spiked collar. And no leash, of course. I grabbed its spiked metal choke collar and yelled for the owners. They meandered up slowly, and gradually a woman came and leashed the dog. I yelled at her – not swearing, but reminding her that there was a leash law in this city and that this park was not a dog park.

What made me really angry was the woman’s attitude. She absolutely did not care about the fact that her dog came running up and threatened us. “I didn’t know you had cats,” she said.

I retorted, “It doesn’t matter that they’re cats! What if this was a child? YOUR DOG NEEDS TO BE ON A LEASH!”

“Geez, chill out,” she whined. “Nothing happened. No harm done.”

“Great. Yeah, nothing happened, this time,” I snapped. “‘Oh, it’s okay, your cat didn’t get killed by my dog, everything’s fine!’ Awesome. But what about the next time? Keep your dog leashed!”

And she just sort of drifted off with her dog, her entire body giving off “whatever” pheromones. I’m sure she took off the leash again once she was out of sight. She didn’t even apologise.

Then, on our way home, we stopped to visit the welder’s cats.

And while we were there, just chilling in the shade with the two kittens we knew two years ago, an Italian Greyhound just barged up, barking and lunging.

It was on a leash…but the humans let go of it.

Luckily, the welder’s cats have a fence to hide behind!

But I have to wonder how many times a day these poor cats are bothered by random dogs in their own home?

This time, the owners didn’t even show up. They eventually managed to call the dog back.

But I am so angry. Ironically, one of my friends, Lee, asked me this week about trouble with dogs. “Do you carry mace or pepper spray when you are out w/Jake? I only ask because it worries me that a dog could attack. There are several folks in our Scottie group who have been attacked by larger dogs while out walking their Scotties and in a couple of instances, the Scotties ended up dying of their wounds,” she wrote me on Tuesday. I said I’d never really had any major problems since we got the stroller…and then today happened. I am actually thinking of getting some dog repellent spray like postal carriers have…even though I’m kind of scared to even use the stuff. I’m also planning to start carrying a quick-opening umbrella to use as a shield if this ever happens again.

It really sucks when you can’t go out to a public park on a lovely Sunday afternoon because people can’t keep their canines under control.

UPDATE: I’ve contacted Animal Control through their website and also their Facebook page, as well as the pages of the City of Boston and Mayor Tom Menino. I sent the following message: “PLEASE GET SOMEONE TO PATROL THE HARBORWALK! It is ridiculous how many people allow their dogs to run offleash in this area. I tried to go out with two cats and was hassled or simply could not use a greenspace because dogs were running offleash. My cats are leashed and like to go out, but we had TWO incidents yesterday where dogs were offleash (one technically had a leash on but the owners let it run around dragging the leash). I posted about it on my blog here: https://abyaday.wordpress.com/2013/06/09/aby-a-day-june-9-going-to-the-dogs-serious-sunday/ However, it’s not just a problem because I have cats. It’s also dangerous when I’m on a bike and dogs are just roaming around. I’m afraid of colliding with one. And many people bring children and babies to these parks, especially Binford…these dogs are NOT under control and many of them are not licensed, either. Something needs to be done.” So we’ll see what happens.

While the holidays are a fun time for cats and people, they can be dangerous, too. I’ve seen some really good advice being posted on the various cat-related blogs this week, and I wanted to pass it along.

From Catster: 10 Ways to Avoid Kitty Disasters on Turkey Day

From PawCurious: Thanksgiving Food Dos and Don’ts For Your Pet.

And from Cat Fancy’s CatChannel: 3 Tips for a Happy, Healthy Thanksgiving with Cats.

Of course, it is perfectly fine to share some boneless, skinless bits of turkey with your cats…

…as if I could stop Jacoby from sharing!

I suppose I should add this one last holiday safety tip for Abyssinian people: Don’t let your cat get stuck inside the turkey!

Jake’s recent accident has made me realise the importance of having a first aid kit for cats on hand and at the ready. Entirely Pets has a convenient list of items you’ll need to stock it with. The one item that isn’t on the list is No-Chew Vet Wrap, which, I have discovered, is invaluable in keeping bandages from being chewed off, and may just keep your cat from needing to wear a Cone of Shame.

One more handy thing to have in your arsenal is The Veterinarians’ Guide to Your Cat’s Symptoms. This isn’t the sort of book you would refer to for in-depth research, but when you’re trying to decide if you need to go to the emergency vet today or if you can wait to call the regular vet in the morning, it’s a great help.

If you go outdoors after sunset (which, depending on where you live, could start as early as 3:30pm), lighting = safety. There’s a company that understands this and makes an array of safety lights for humans and their pets. Nite-Ize Spotlit and Magic Marker especially are designed specifically for pets. Jake has two Magic Markers attached to the front bars of his stroller, and they help a lot in making it more visible at night. I also generally hang an LED wand from the handlebars as well. Combined with the reflective tape that already sewn into the sides of his stroller, I think we may be more visible in the dark than we are during the day!