So there’s this game on TV today. You might have heard something about it. 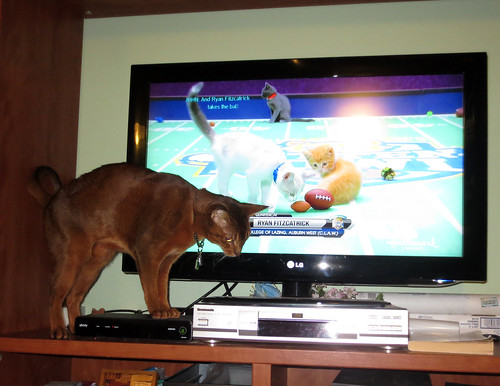 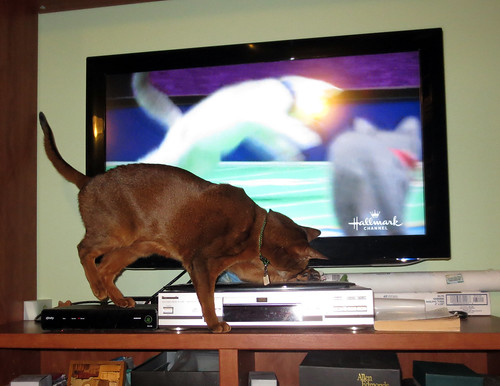 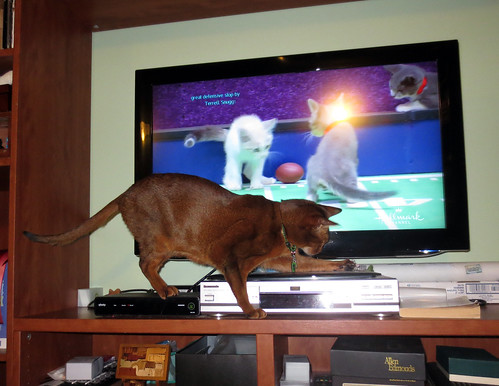 Jacoby is a big fan of the Kitten Bowl, which is an actual, three-hour long playoff game…played by kittens. 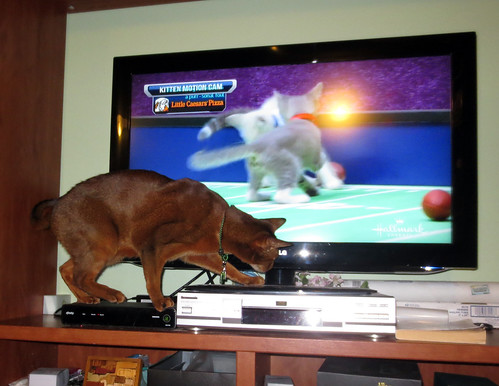 This year, it really seemed like Jake wanted to play with the kittens. 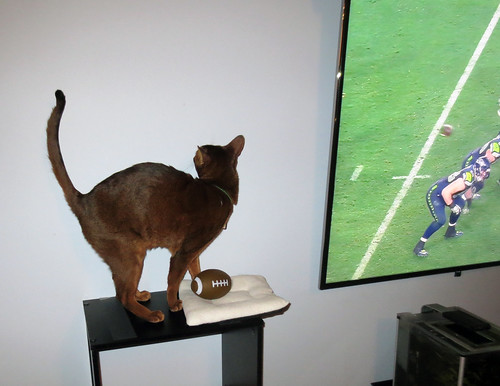 So, I got him his very own football. 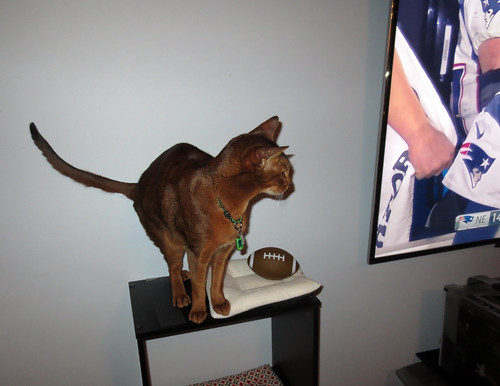 “I don’t see what the big deal is…it’s not that hard to play with a ball.” 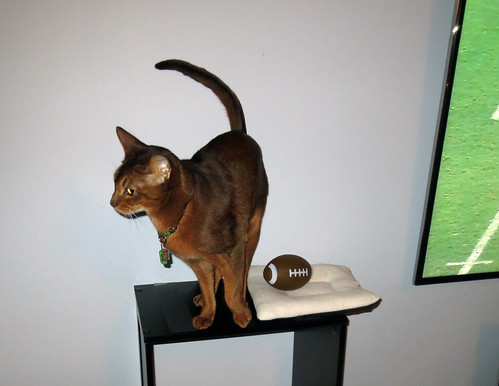 “Meh, whatever…19 days til pitchers and catchers report. Bring on the Paw Star Game!“ 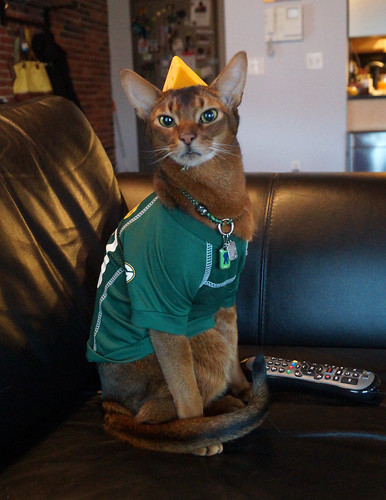 My husband is a Green Bay Packers fan. 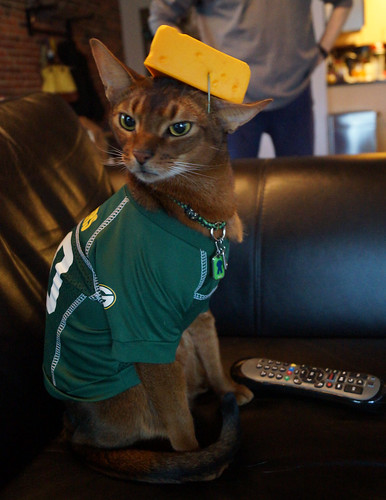 Since Jacoby is the only boy in the house, and the only other person in the house who will watch football on a regular basis, he is also a Green Bay Packers fan. 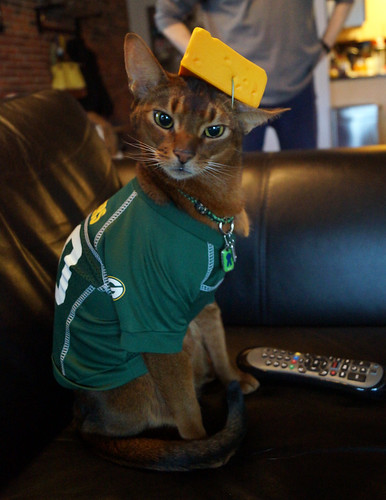 You may remember when the Packers won the Super Bowl, and Jake dressed up in a Green Bay jersey and helmet. 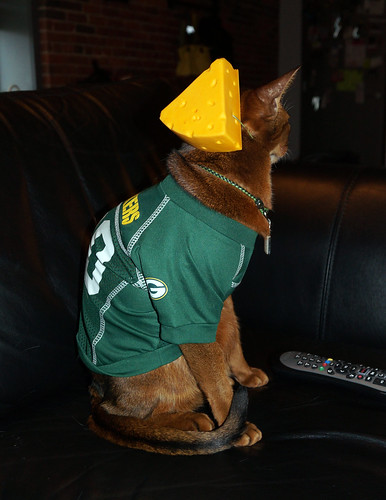 Now he also has an official Cheesehead to wear. 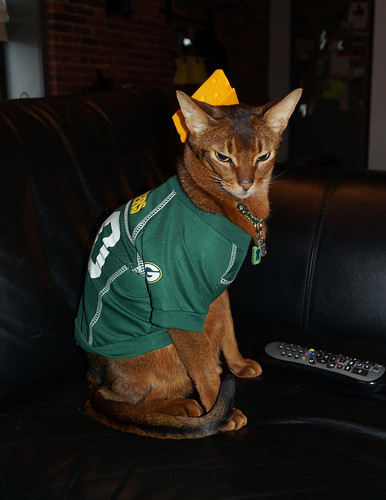 Not that it did a lot of good last Sunday. 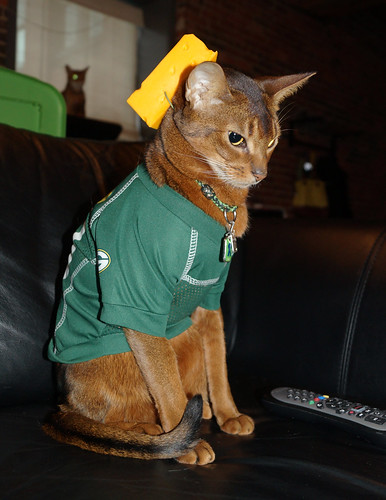 In case you didn’t hear, it will be Seattle and not Green Bay who will play the New England Patriots next week on Superbowl Sunday. 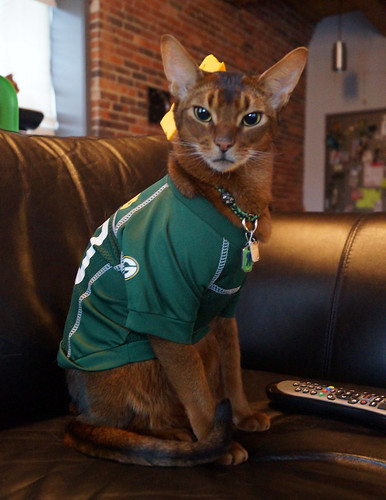 I would explain why Jacoby is not a New England fan (when he is all about everything else Boston)…but it’s a very long story. Let’s just say it’s because of his dad and leave it at that. 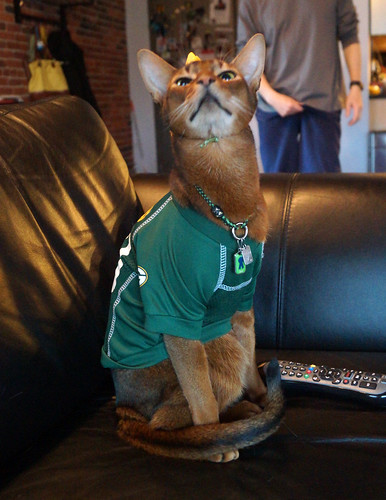 Jacoby and I got a special delivery care package from our friend Kim (who lives with Jake’s Uncle Clancy and his Cousin Seamus) yesterday.

Kim thought Jake deserved his own pair of Red Mittens

Okay…so his mittens are actually a keychain. But they’re still real mittens!

They really fit on his paws!

He needs to grow into the thumbs, though. 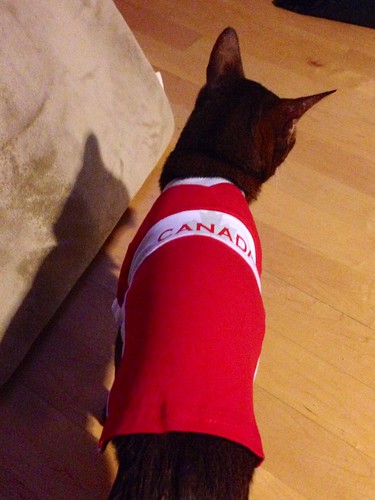 He was pretty proud of himself when I put it on him. You can bet he’ll be wearing it on Sunday.

Here he is with his shirt and mittens on.

You can see how pleased he is with himself. My friend Sheila said he was “being smug and showing off,” and she is right! We benched together at Westchester and she explained Jake to someone on Facebook: “Jake is a very atypical, unusual Aby. Seems to know how handsome he is and so he loves to wear clothes and show off. He certainly has one of the mellowest personalities. He will sit in a show shelter, door open, posing for the public, and not move a paw even when unsupervised. I witnessed this, and while it almost gave me a heart attack when I first saw it, I then marveled at it. MAYBE a freeze dried chicken treat would cause him to jump down, if it were on the floor, but then I swear he would jump right back up into his “house” and pose again.” That is Jake all right!

We are now ready for the big game on Sunday – Bring it on, Sweden! Thank you SO much, Kim…we owe you one!!

Finally! The Winter Olympics Hockey games at Sochi start tomorrow! And of course we’re all excited about watching Team Canada…but then again, our favourite goalie is on Team Finland.

That’s bound to be confusing.

The Winter Olympics officially start in three days. Angel loves the Winter Games; since most of them are played against a snow- or ice-white background, she can really see the action.

Of course, in our house, the real sport is trying to watch the Games through Angel.

Today is the one day that people look forward to all year long, for various reasons. Some get all excited about humans playing football, while others can’t wait for the Puppy Bowl and Kitty Half-Time Show.

This year, though, there was a new game in town: the Hallmark Channel Kitten Bowl!

Jacoby was all over the kitten action, from the locker room interviews to the three games themselves.

Unlike the Puppy Bowl, the Kitten Bowl was an actual playoff game, with actual teams and an actual winner. While the Puppy Bowl is basically just puppies running around playing with toys and each other, the Kitten Bowl had distinct teams: The red and white North Shore Bengals (featuring Ferrell Owens) wearing blue collars; the Last Hope Lions (featuring Tabby Romo), brown tabbies sporting purple collars; the black and black and white Home and Family Felines (featuring Feline Manning) wearing orange collars; and the blue Cedar Cove Cougars (featuring Tomcat Brady) in their red collars. Touchdowns were counted by kittens carrying or batting toys over the goal lines, and field goals were scored by the kittens climbing or jumping over the sisal rope-covered goalposts.

So, in other words, there was an actual game going on with the Kitten Bowl..at least, when there wasn’t a power outage (which both the Kitten and Puppy Bowls seemed to have problems with this year, go fig)!

The Kitten Bowl was three soild hours of kitteny goodness…clearly better than the Puppy Bowl’s ever-shrinking Kitten Halftime Show (which seemed even shorter this year, diluted as it was with Keyboard Cat doing Bruno Mars).

And since it was played by rescue kittens, there were no Abys in the Kitten Bowl…but there was a little white kitten who looked a lot like Kylie did when she was a kitten!

I loved that all the kittens were organised into distinct teams and that each little cat wore a collar with a North Shore Animal League tag. It was a great three-hour commercial for shelter kitties…and it was a lot of fun to watch, too. Jake and I can’t wait for next year’s Kitten Bowl!

The 2014 Winter Olympic Games in Sochi, Russia begin next weekend. We’re all big winter sports fans here in this household, so the Winter Olympics are a Very Big Deal.

And no one is more excited for the Games to begin than Angel.

She loves hockey. And she really enjoys watching it as closely as she can.