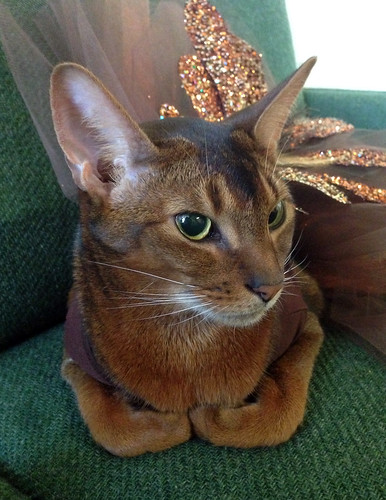 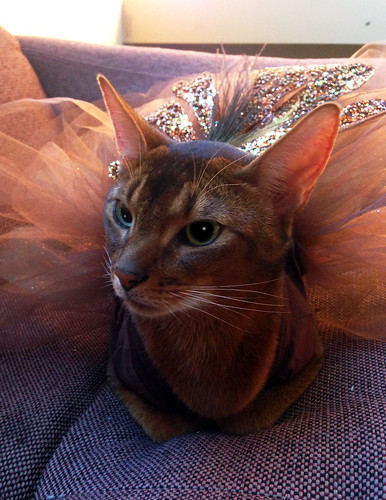 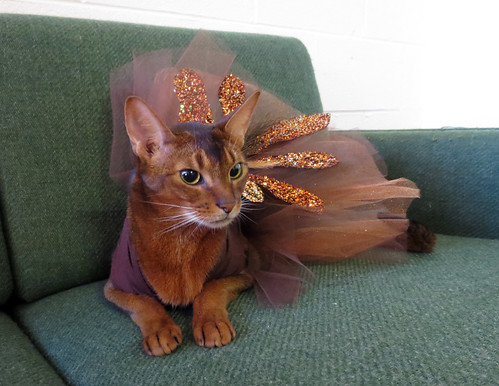 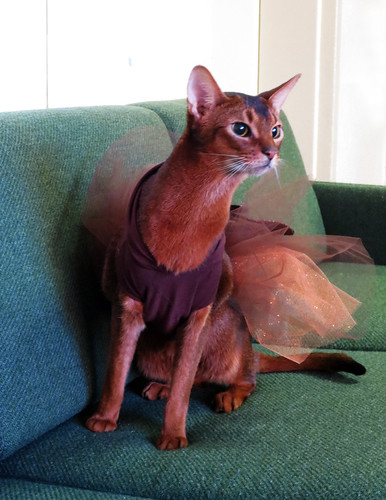 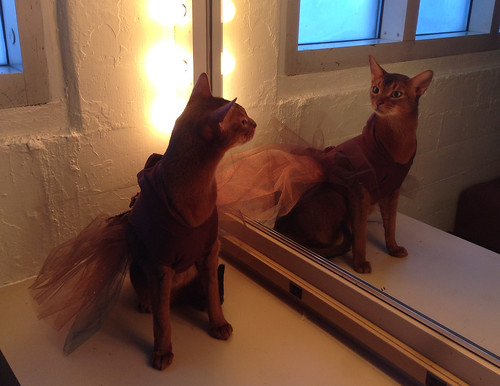 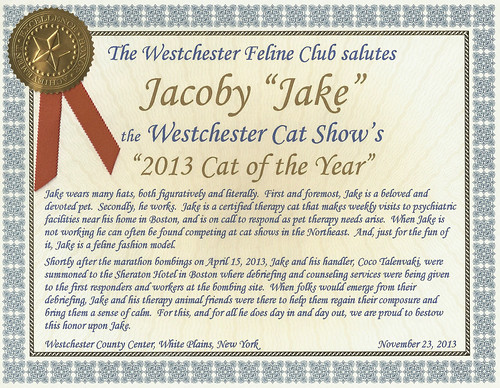 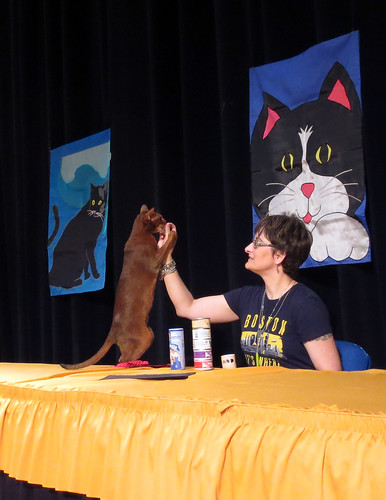 So this morning, when I checked my email I found this in amongst the spam:

2014 BEST ABYSSINIAN ALTER OF THE YEAR 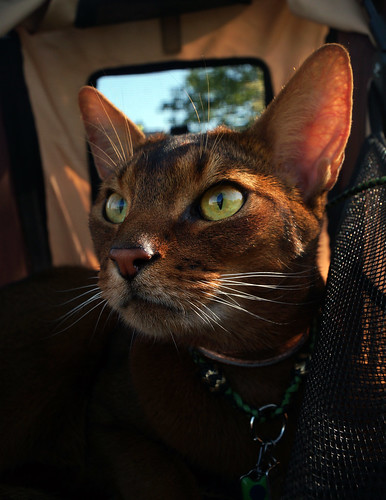 Your certificate may be picked up at the Northeast Regional Awards Banquet to be held at the Yarmouth House Restaurant, Yarmouth, MA. If you are unable to attend the banquet, you may arrange for someone else to pick up your award(s) for you or you may request the certificates be mailed to you by emailing or calling Francine Hicks. Awards will be mailed after your request and the receipt of a suggested donation to the region to offset mailing costs. 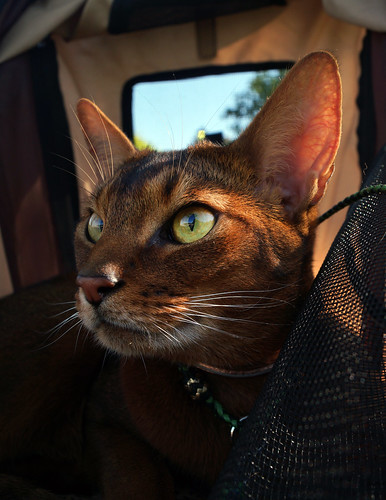 All Best of Breed winners, Top 20 in each category including top 20 LH and SH cats are featured in the slide show during the awards ceremony. Please send your picture to Suzanne Philbrick. All information regarding the Regional Show and Banquet can be found at our own Northeast Website.

I hope to see you at the Cape for our year end celebration!!!

If you have any questions, please feel free to contact me. 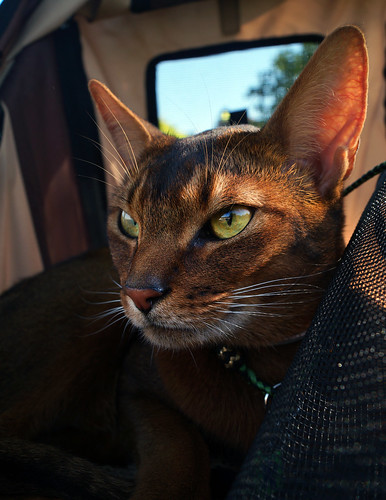 So Jake’s a regional winner…in TICA! Who knew? I think we only went to two TICA shows this season…we certainly weren’t trying for a TICA regional award…but look what happened! I don’t know if I’ll be able to attend the banquet in person (it’s on September 6th), but what a nice surprise!

I’ve been waiting for the points from the Westchester cat show to show up on TICA‘s TDS Online system so that I could apply for Jacoby’s Grand Champion Alter Title. If you recall, he had enough finals to Grand, but enough points to Double Grand after the second day of the show.

Or so I thought. He earned his Champion Alter Title at his first TICA show, the Salty Cats show in Providence in March, 2012.

However, according to TICA, Jake earned his Grand Champion Alter title on Saturday at Westchester.

And on Sunday, he DID earn his Double Grand! I must have miscalculated somewhere (not hard to do: it involves math), or misread the rules or something, but I’m just happy that he did earn his Double Grand. I have to admit, it was a little discouraging to go to a two-day, 14 ring show last year and not make one. Single. Final. ALL weekend…I’m pretty psyched about this, to say the least.

That’s the one interesting thing about TICA as compared to CFA: once a cat becomes a Grand Champion (or Grand Champion Alter), he can continue collecting points to become a Double, Triple, or Quadruple Grand Champion, and from there, the highest title of Supreme Grand Champion (Alter). You can see where I got confused:

The points and the finals are cumulative, so the 3 finals and the 500 points include the 150 points and the final you earned to get the Championship. I think that may be where I messed up my math in tracking Jake’s points and finals. In any event, I trust TICA’s computer, so if they say he’s a Double Grand, who am I to disagree?

At the Westchester show, it was my pleasure to be benched next to Joe and Marvie and their Aby QGC, RW Odakota Fearghus of Majorus (Gus, for short) and their fawn Somali Majorus Conneach (Max, I think he was called for short).

Max is only just a year old (born 28 October 2012*) and he’s still in the Novice class, but he has a very mature personality.

In fact, Joe says he may have a future as a therapy cat! I can see it. Max is a wonderful guy who loves to walk on his leash and meet people.

He spent a lot of the weekend on the floor, playing with the spectators.

I don’t think I’d ever seen a fawn Somali in person before I met him…isn’t he handsome?

But the funniest thing was when we were packing up on Sunday afternoon. Joe and Marvie’s grandkids were pushing a little flat cart, and Max and Gus went along for the ride!

It reminded me so much of Jacoby riding the cart in our building down to the first floor. I guess cart riding is another Aby/Somali trait. Gus is actually an Aby variant; his mother, Thecatgarden Lildreamer of Odakota is a Somali).

I thought Gus looked more like a Somali than an Aby when I first saw him; he reminded me a bit of my Siamese Patrick, whose mother was a Balinese. Although he was a TICA-registered Chocolate Tabby Point Siamese, he had softer, silkier fur than a “normal” Siamese.

Max was much more into the riding than Gus was. It was pretty fun to watch them. Good to know I’m not the only one who has a silly cat!

*Speaking of Patrick, he and Max share the same birthday! Patrick (aka Sugar Hill Twinkletoes) was born 28 October 1994 and lived to the grand old age of 16.

There’s so much to share, but right now both Jacoby and I are exhausted. We left yesterday morning at 6:40 and our train got back into Boston at 9:20 tonight, so we have had two very long days.

Being the Cat of the Year’s human is a big job! It was a little surreal to be part of a celebrity team. I mean, he was on the Jumbotron! I was constantly talking to people, or doing something with Jake. Besides the Cat of the Year, Jake was also entered in the show (we only missed two rings, which is a bit of a miracle) and he participated as a model in the Fashion Show which was held both Saturday and Sunday. Jake is actually the first Cat of the Year to do all three things in the same show!

He is in very good standing…the full list of all the previous cats isn’t online anywhere (yet), but it was at the show…and what an impressive list it is.

Jake got an incredible rosette – the Scarlett Ribbon – with a photo of Scarlett, who was the very first Cat of the Year and the reason the award was created. It’s an honour to be on the same list with that brave little cat – and all the other amazing cats who have been Westchester’s Cats of the Year.

He also got a certificate that I’ll need to frame…

And Weruva Cat Food is sending us some of their awesome cat food! They gave us some cans and some treats – which Jake loved (of course).

Our good friend Matthew and his mom even came to the show to see Jake get his award! On top of that, today he finally got his 6th TICA final…and he is not a Grand Champion Alter. He actually has enough points to be a Double Grand Champion Alter…but he just needs to make one. More. Final. Oh, well. There is another show in February in Framingham…