After yesterday’s Wordless Wednesday post featuring Dashiell, I was asked how Dash compares to Alfred in size. 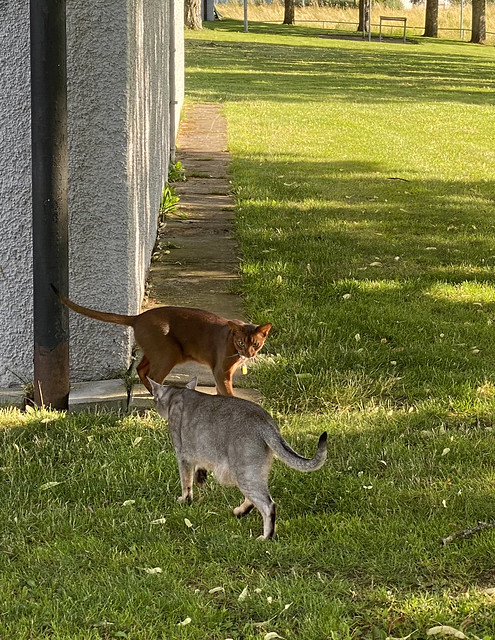 Well, they are actually quite similar in size. Dash is a little taller (he has longer legs) and he’s very well-muscled and lithe. Freddy is stockier, broader in the chest, and naturally heavier-boned. And…well, Freddy is a chonk. 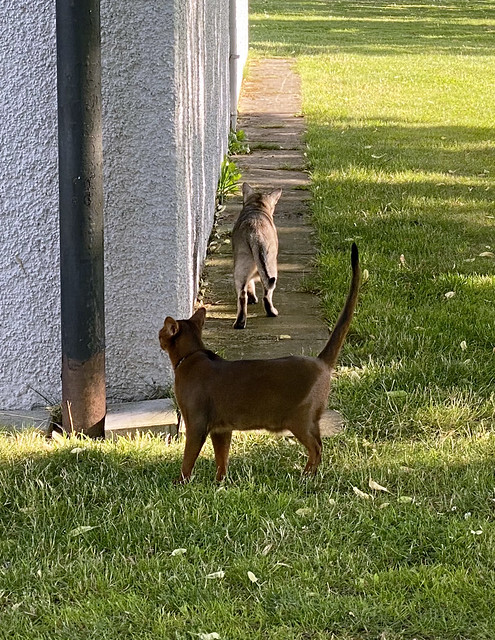 The last time I weighed them (27 September), Dash weighed 4.4 kg (9.7 lbs) and Freddy weighed 5.5k g (12.1 lbs). I have Freddy on a diet, and I try to let him out to run as much as I can. He’s just too good at stealing food! Apparently, his sisters are also big eaters, so I think he’s just naturally husky compared to Dash.

Siiiiggghhh… And we had been doing so well, too. Jacoby has been on his treatment plan for several weeks, and he had been gaining weight nicely. But in the past week or so, he’s been…not himself. Less eager and excited about food, sleeping in unusual places (like the radiator bed, which I don’t think I have ever seen him in before), and just…not being himself. Most concerning, the last time I weighed Jake on 16 March, he was up to 4.8 kilos…and yesterday, he weighed 4.3 kilos. 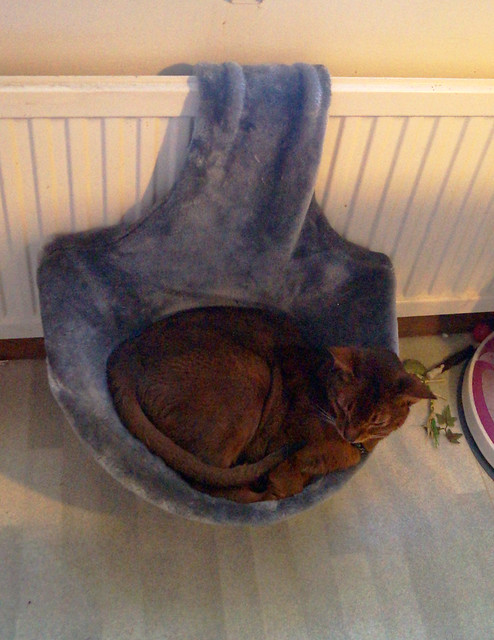 So…I called Min Veterinär this morning to leave a message, and then, completely by coincidence, Anicura called me an hour or so later. I made an appointment with them, just in case…and, when Min Vet called me back, we discussed it and decided it would be better to take Jake back to Anicura since they have all his recent treatment records. So it looks like Jake and I will be riding the rails to Jönköping this Friday.

The caption says that she’s “One Cool Cat,” but I think a better title would have been “Large and in Charge.” She’s quite a round little girl, isn’t she?

Jacoby and Angel getting weighed at the vet pretty much epitomise the difference between men and women in general. 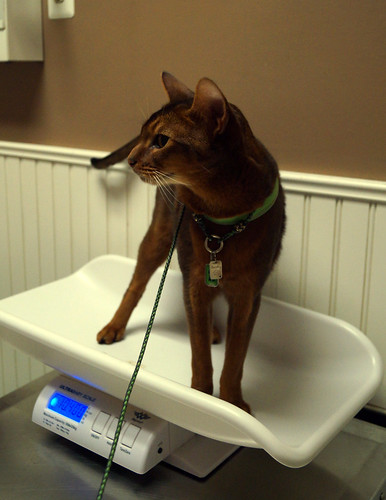 Jake steps onto the scale filled with self-confidence. 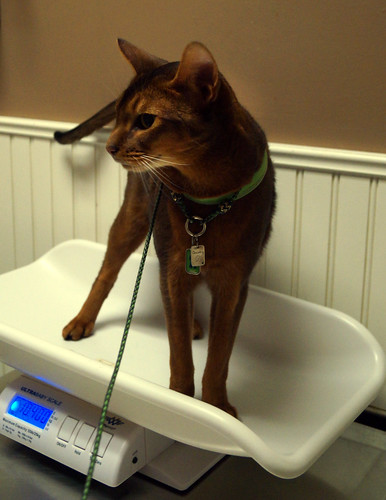 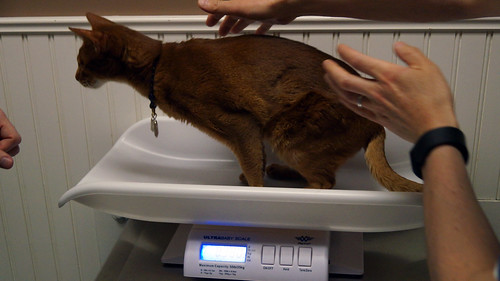 Meanwhile, Angel is a little more hesitant about stepping onto the scale to see her weight. 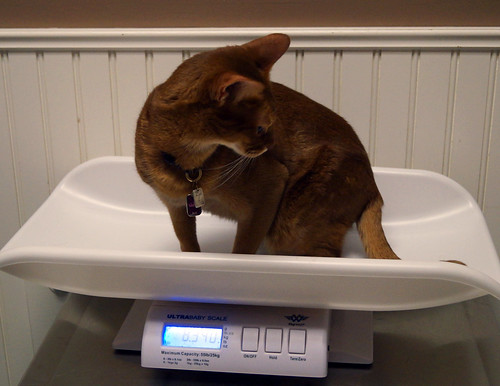 “9 pounds and how many ounces?” 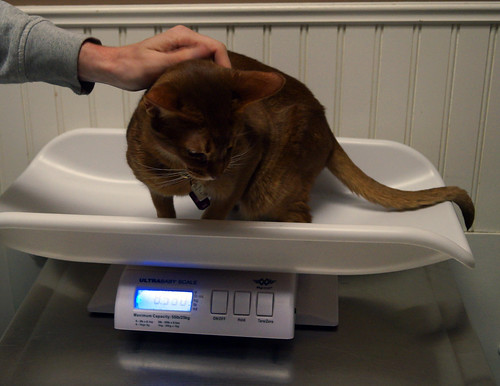 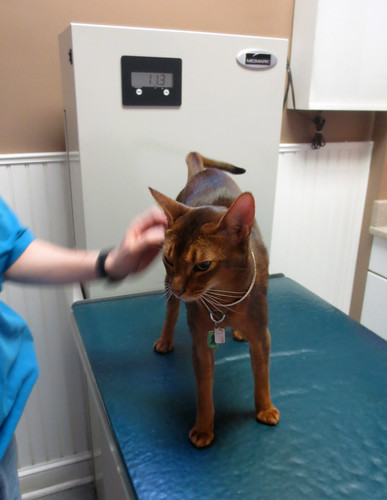 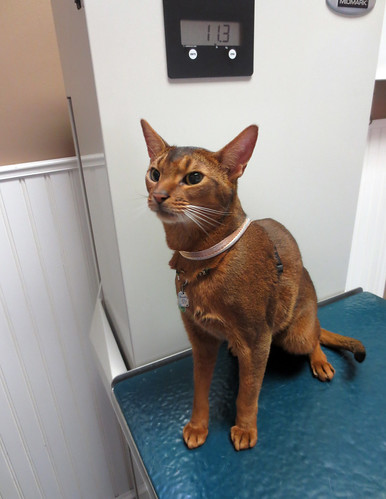 I was a little afraid of this…Ever since Jacoby’s been on his urinary tract prescription diet, he’s been getting more canned food each day. However, he doesn’t seem to have backed off on his dry food nomming. We’ve tried feeding him less, but the girls, particularly Tessie, actually prefer dry to canned and aren’t getting enough to eat. Tessie actually sniffs her dish of canned food and walks away or stares at us as if to say, “Where’s my real food? I want a dinner that crunches!”

I’m also pretty sure that Jake is managing to eat at least part of Tessie’s canned food allotment, even though we try to prevent that. He’s pretty sneaky when he wants to be.

So I weighed him the other day, and he’s gotten up to 11½ lbs! At his last “official” weigh-in, on September 18, he’d actually gotten down to 10.8 lbs…of course, this was also when he had the sniffles and his urinary tract infection, but still…it looks like it’s diet time for Jake again.

Well…Jake still weighs 5.1 kg. I don’t get it…we’ve been going on outings, and therapy visits, and he’s still on his diet…but he seems to be stuck right on 5.1 kg.

Maybe once the weather gets nicer, we’ll start walking more, and that scale will show some progress in a downward direction.

Well…Jake still weighs 5.1 kg. He has a bit of a belly, still, but I think he’s looking slimmer. What do you think?

Just like last week, the scale actually shows more progress if you don’t round up…Jake still weighs 5.1 kg, but technically, he’s down to 5.05 kg.

I think now that the weather’s getting nicer and we’re going to two different assisted living facilities, he’s going to start slimming right down. We don’t have to worry about hitting his goal weight of 10.5 lbs/4.75 kg until August 7, which is when the CFA show in Mansfield, MA is scheduled. It’s a six-ring, one day show, and its the only show I’ve found yet that I can get to by MBTA. Gun-Hee and I went to this same show in 2007 and it was fun to go to a show on the train.

Once again, the scale actually shows more progress if you don’t round up…Jake now weighs 5.1 kg, but technically, he’s down to 5.08 kg.

I think now that the weather’s getting nicer and we’re going to two different assisted living facilities, he’s going to start slimming right down. It doesn’t look like we’ll be able to go to the Concord, NH cat show at the end of the month, so we won’t have to worry about his weight that soon…there’s usually a show in Mansfield, MA in August, so that will probably be the next show we go to.

Welcome to Week 5 of Jacoby’s diet and exercise plan, and finally, finally we’ve got some news! Jake now weighs 5.1 kg!

Here we are, Week 4 of Jacoby’s diet and exercise plan. He eats almost no treats any more, and his food is measured and we don’t let him clean the girls’ plates if they don’t eat all of theirs, and yet…I don’t think I’ve ever been so frustrated by a diet before in my life. This is week four, so it’s been a month and Jake still weighs 5.2 kg…just the same as last week. And the week before that. And the week before that.

I just don’t get why he hasn’t lost anything. I’ve been taking him out to run in the hallway daily, he chases his laser pointer, he wrassles with Angel. But he weighs the same.

Here we are, Week 3 of Jacoby’s diet and exercise plan. We’ve gone on more outings, and I know he’s not getting as much to eat as he wants since he woke me up both Saturday and Sunday to feed him when I slept past 8am, and after all of that, he weighed…5.2 kg…just the same as last week. Well, technically, this week he was 5.15 kg…so if we take into account that last week he was (technically) 5.17, then he really is losing!

Here we are, Week 2 of Jacoby’s diet and exercise plan. We’ve cut out treats, started measuring his meals, and done a bit more running around the hallways, and after all of that, he weighed…5.2 kg…just the same as last week. Well, technically, he was 5.17 kg…so, hey, if we aren’t rounding up, then he has lost a bit!

Yeah, we won’t let him read these early progress posts…

I was Googling kitty weight loss plans when I stumbled across a related question on AllExperts.com. Imagine my reaction when I saw that the expert answering the question was none other than Norm Auspitz, CFA judge and Aby aficionado!

So of course I had to ask him about the best way to help an Aby lose weight, right? I have emailed him in the past about Aby rescue, and I’ve spoken with him at cat shows, but I’d never have had the courage to email him directly with a question like this. But on AllExperts, where it’s meant to be anonymous, I figured I couldn’t not ask him.

And, yesterday, I got a response from him! Although, I guess it wasn’t so anonymous afterall since he addressed it to “Coco”…

Question: I have a year and 10 month old Aby neuter who just entered his first CFA show. He did well enough for an Open, collecting his six Winners Ribbons, and the judges had positive comments about his colour, ticking, eyes, earset, legs, tail, and personality…but almost every single one told me to “get the weight off him.” He is “stunning” and “definitely Grandable” but he’s a chunky monkey. Problem is, we have three other cats, one of whom is UNDERweight! We feed high protein, no-grain dry food (Blue Buffalo Wilderness) and grain-free canned food, and he does get a lot of exercise (he’s a therapy cat and he loves to go on outings with me), but he hasn’t been able to get out much over the winter. He’s also a food stealer…he’ll try to intercept my fork on its way from my plate to my mouth, and he sneaks whatever he can and drags it to his lair (his show cage) to hide it. He also loves Cheetos! We don’t give them to him…but he does steal them when he can.

Knowing you know Abys, what’s the best way to distract him from the other cats’ food? I think I know ways to get him to exercise more, but his greedy attitude towards food in general is a problem! If it helps, his father and uncle are big Abys, too; his uncle is a GPr who has also had weight problems. My cat’s brother is a champion and weighs about a pound less.

*Sigh*, yes this is a problem with neuters. On the other hand, at 10 months, there may well be some “baby fat”, but, given his father and uncle, you are best to get on this now!!! We tend to indulge them and they tend to eat everything we give them. So, the only solution is to feed them less. Having said that, when you first cut down their food, cats metabolism slows down (just like people) and there is no apparent weight loss immediately. However, after some weeks or months on the restricted diet, they do actually begin to lose the weight.

With our show Abyssinians, they are on a strict two meals a day regimen. We leave no food out for them to “graze” on. What they get to eat at meal times is all they get! With some who attack their food and inhale it down, we often have to feed them in a cage or crate where they stay until everyone else is finished. You may also have to resort to confining him while you finish eating.

We also have cut down the amount of dry food they get. We mix good wet food with some dry. Good luck and I hope he becomes a Grand.

So there you go, the word of the expert! Good thing we have that show cage set up and Jake thinks of it as his den of iniquity!

Starting today, I’m going to monitor Jacoby’s weight with a Monday Weigh-In. I’d like to at least try to get him below 11 lbs; I’d very much like to take him and Kylie to the 10-ring show in Concord, NH on April 30 – May 1, but Jake needs to be “svelter” before we try a big show like that.

I’ve decided to track his weight in kilograms rather than pounds simply because I think it’s more accurate, especially when measuring on a weekly basis. I think his goal weight right now is 4.75 kg (10.5 lbs), but let’s see how he progresses. All we’re going to do is reduce canned food, measure dry food, and cut out treats…and Cheetos…and try to get him to exercise a little more with more sessions with interactive toys like lasers and wand toys. Nothing too drastic; that plus the warmer weather and more outings should make all the difference.

So, today, before his nightly canned food, he weighed 5.2 kg. A good starting point, I reckon.

Tune in next Monday to see where he is!