So, since I posted last week, Björn is still in the hospital (he may get out tomorrow), and I have tested positive for Covid. Despite having asthma, my lungs and breathing are remarkably all right; my biggest reaction has been in my gut. Nausea, a metallic taste in my mouth, and zero appetite. Since the last time I weighed myself (the last time I weighed the cats), I have lost 5kg (11lbs). Hey, every cloud has a silver lining, right? Anyway, the other night at about 4am, I had this brilliant idea for a 1950’s-style weight-loss ad…it doesn’t include a cat, but it’s a pretty decent Photoshop if I do say so myself.

Because of the pandemic and me being in a high-risk group, I haven’t travelled much at all this year. This trip to Stockholm was the first one I’ve taken anywhere since we took Lorelai to meet Io back in July. It was nice to see new and different things again! 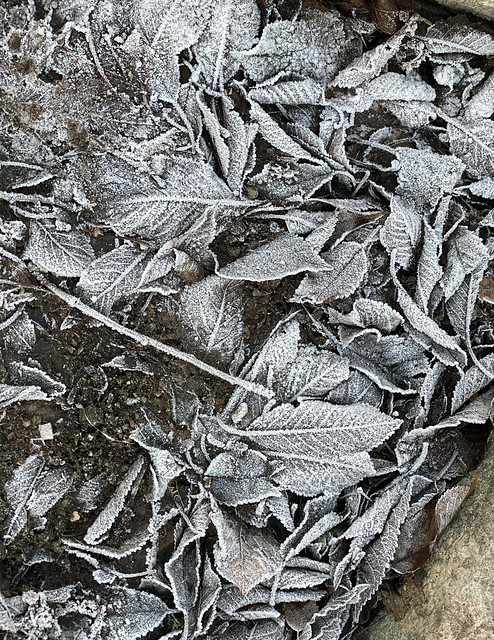 There had been some snowfall, and at a rest stop, I saw these lovely frosted leaves. 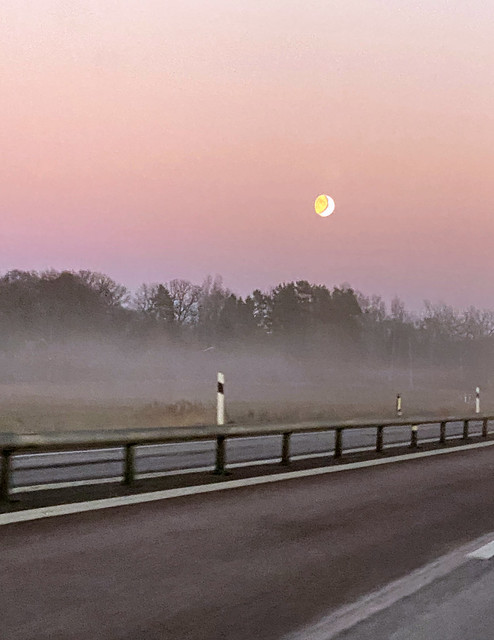 On the road at dusk (around 15:00), there was this incredible moonrise. 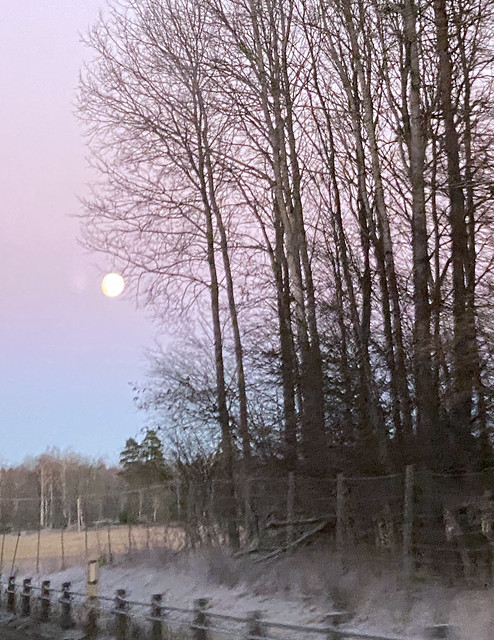 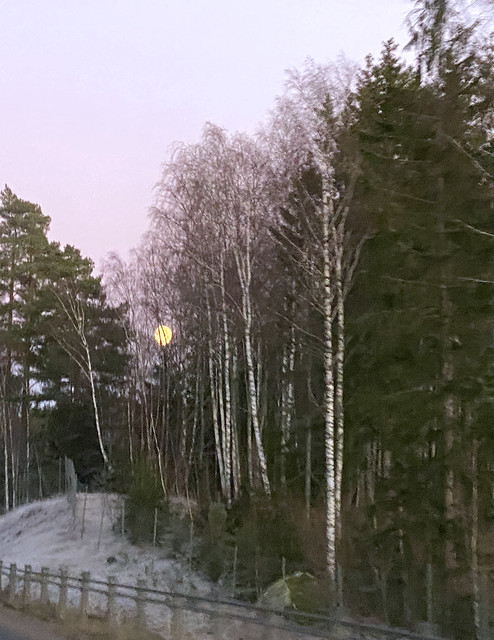 Considering I took these photos through the windows of a moving car, I think they turned out rather well. 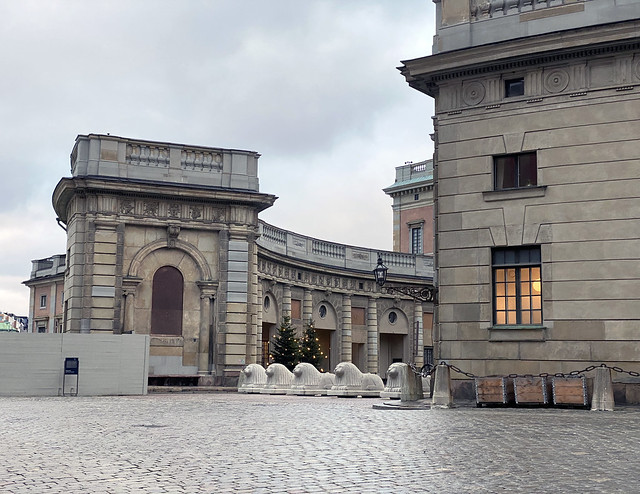 On Saturday, we went into Stockholm city to do some shopping. We passed by the Royal Palace, already decorated for Jul. I love the concrete lions guarding the entrance. 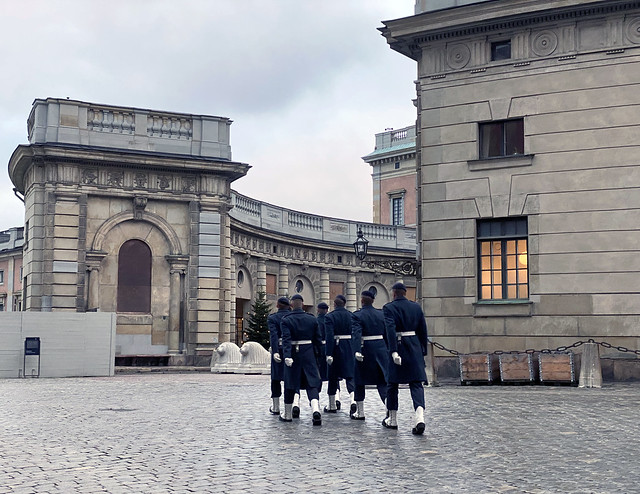 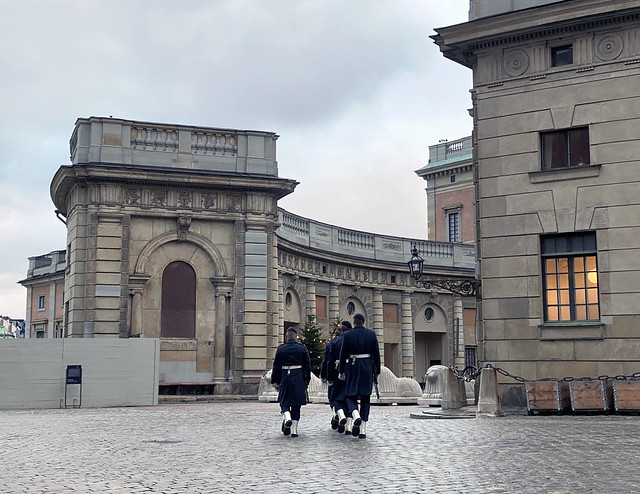 As luck would have it, whilst I was taking that first photo, the Royal Guard happened to pass by! 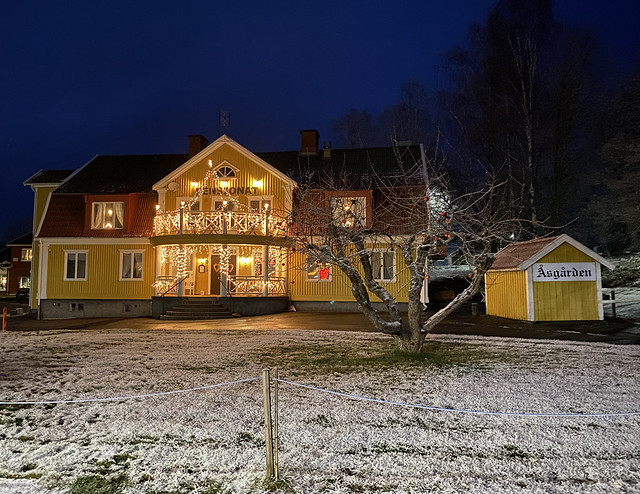 I took this one on the way back when we stopped at an ICA to get a snack. It was closed, but if we hadn’t stopped I wouldn’t have gotten to see the historic Åsgården. 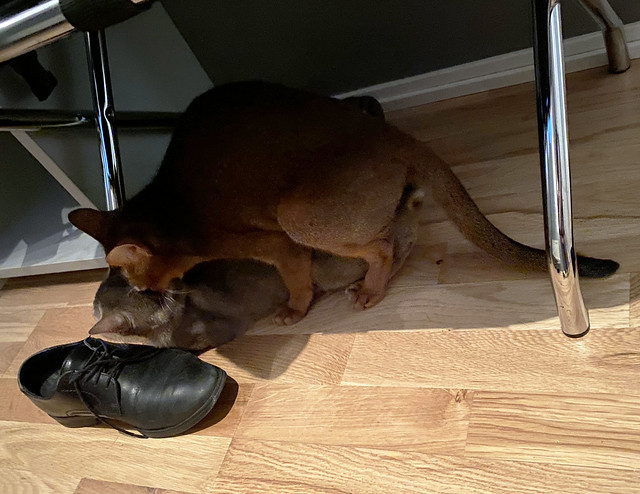 Still, out of all the things we saw last weekend…this was definitely the best!

Today is my birthday! A fairly important one (I was born in 1965; you do the math)…and Björn gave me gifts that coordinate with my art in the past year. First…the one that was released today and hasn’t shipped yet: a Baby Yoda doll! 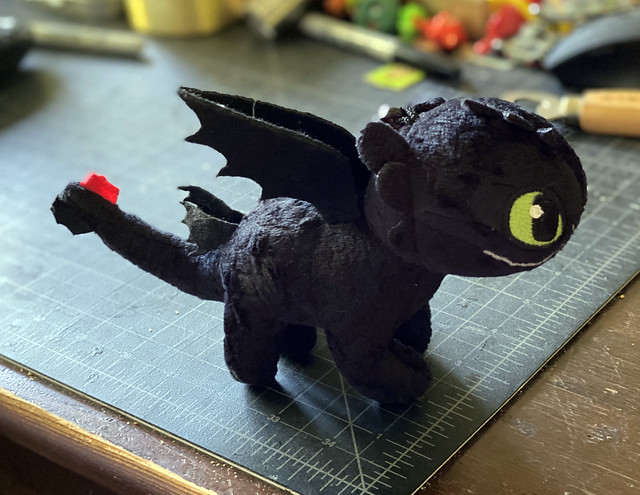 My next gift was a small plushie of Toothless, who I also drew as a versiom pf Izaak. 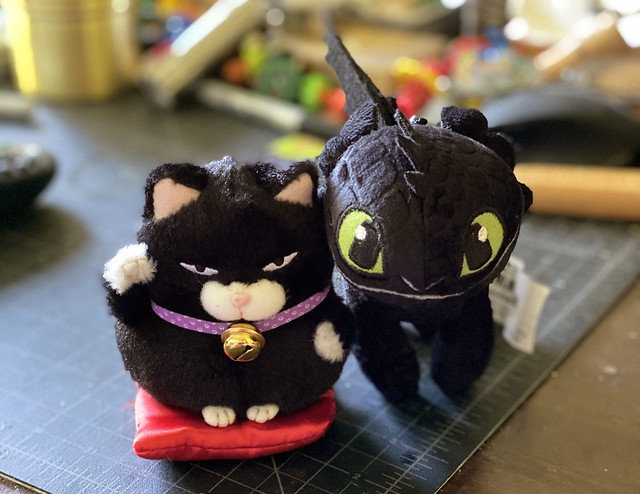 Besides Baby Yoda and Toothless, Björn also got me a black Lucky Cat. 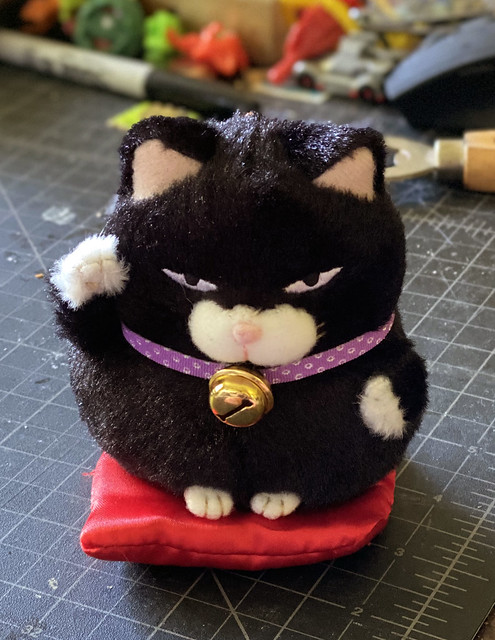 Okay…so, angry black Lucky Cat may not connect to any cartoon I’ve done, but he’s still adorable. I love them all!

This is only tangentially related to Abys, or even cats, but I thought you might find it interesting. 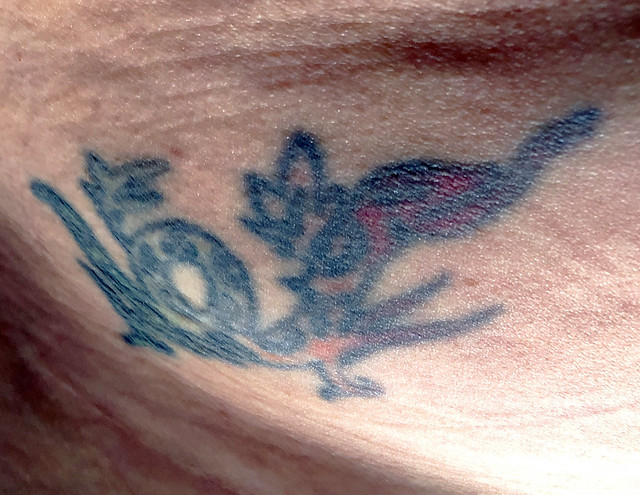 I had this snake tattoo…and I really didn’t like it. I got it for the wrong reasons, it hasn’t aged as well as most of the other ones I have, and it really doesn’t go with the other tattoos I have. 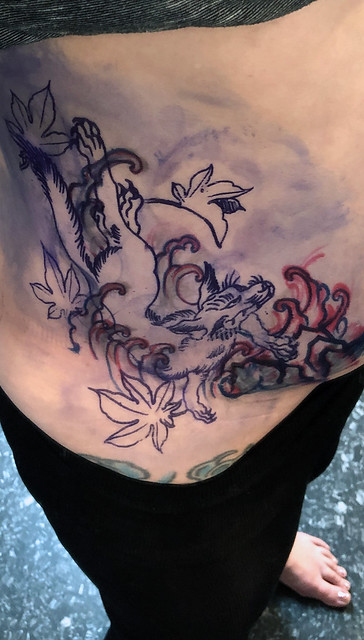 So I finally decided to do something about it. I decided to get the snake covered up with a traditional Japanese fox design. 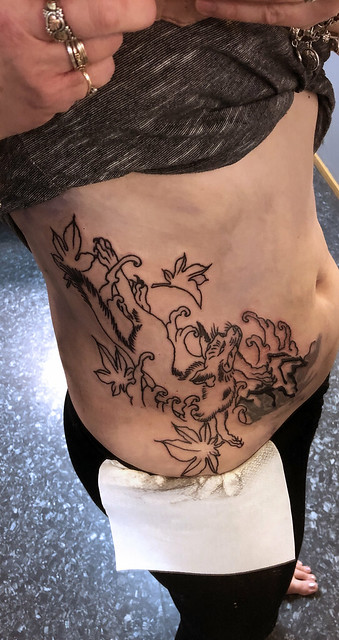 Today was the first session. We got the outlines done, and then we coloured in the fox. I am not going to lie…this was the most painful tattoo I have ever gotten. 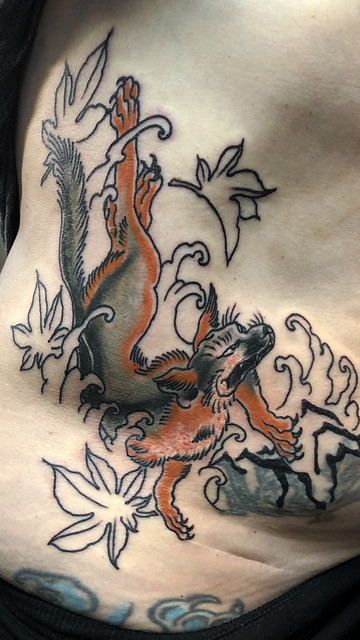 Instead of a red fox, though, I wanted a North American grey fox. I have always loved the grey and orange colouration of these foxes. 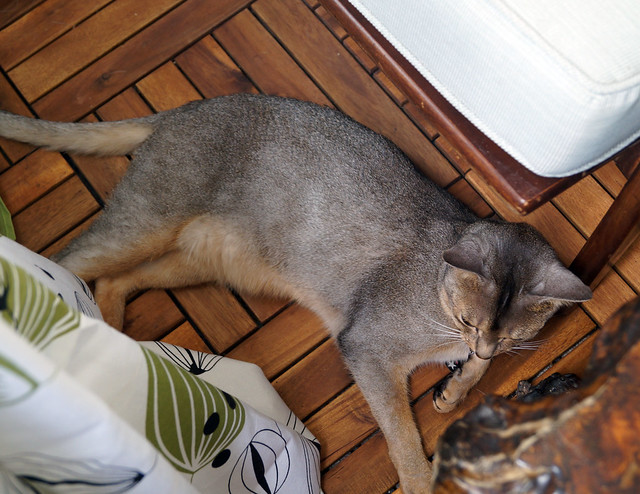 Also, the colouration of the grey fox is quite similar to Alfred’s…I call him my grey fox. 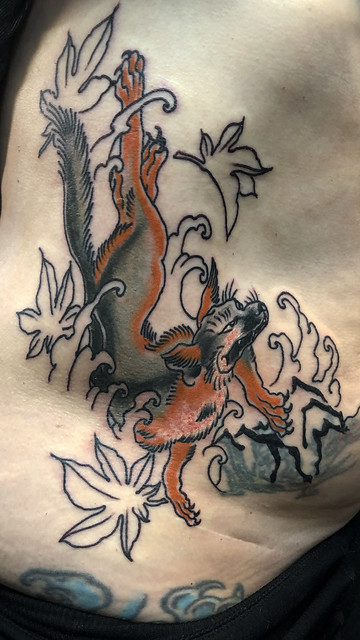 When I got home, I was drained and exhausted. I was lying on the sofa and Jacoby instantly came and lay on top of me…and on top of the tattoo. But it was nice, actually. Soothing. We’ll finish this tattoo up next month. 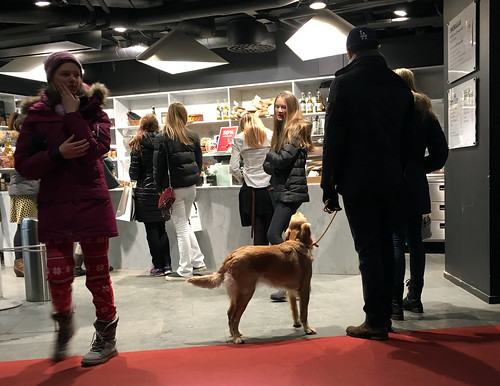 When I was in Sweden, I noticed that there were a lot of dogs in public places – indoors! 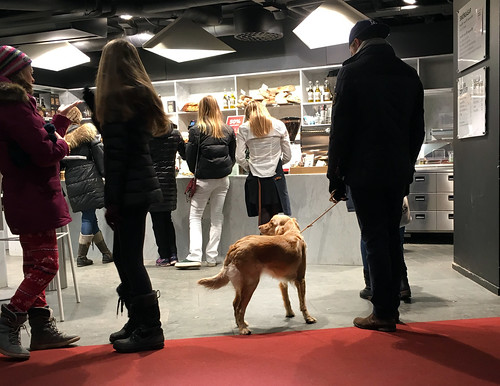 And not just places like trains and subways, either. This dog was in a mall in Stockholm. He was very well behaved, and he wasn’t the only dog I saw in that mall that day. 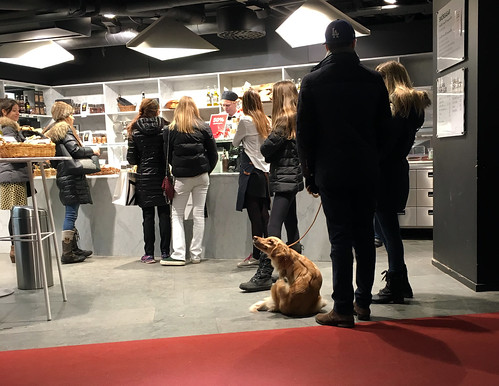 However, as you can see, he’s waiting in a queue with his master in a coffee shop that serves food! That’s a big no-no in the States. This bodes incredibly well for Jacoby and I having shopping adventures in Skövde. We may even become regular fixtures at the shopping mall that’s only several meters from Björn’s apartment! At least, we’ll have to visit Dad at work on Saturdays when Björn works at that mall…

While at cat shows with Jacoby, I amuse myself by taking selfies of us to send to Björn. 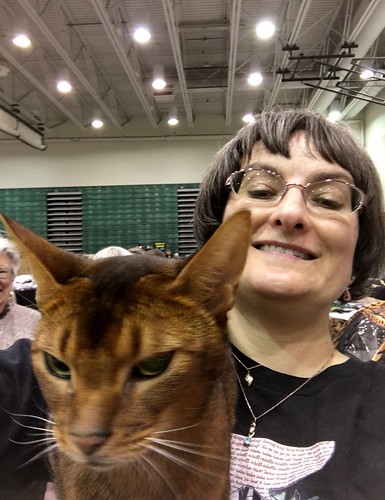 Jake does not always approve of my attempts at taking selfies. I obviously look too goofy in this photo. 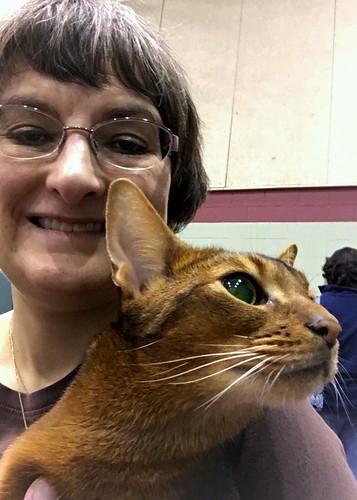 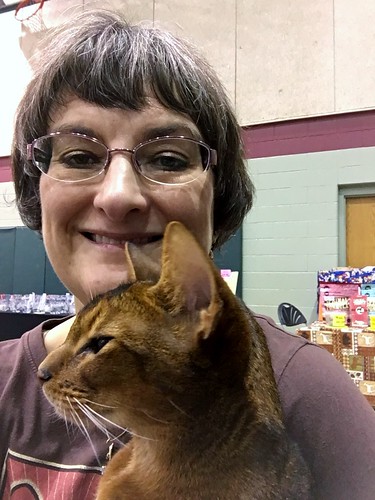 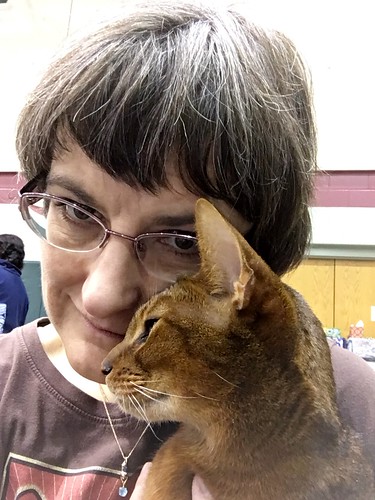 This one is us being super cute (or a facsimile thereof). 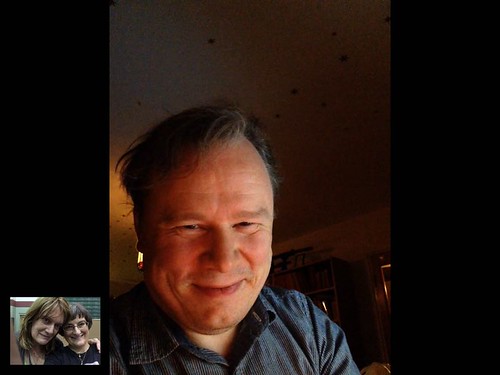 This is my favourite though. It’s me and my friend Charlotte, Facetiming with Björn in the show hall. Charlotte lives in Astoria…I wish we were closer and could hang out more. I’ll miss her (and her lovely Siame…er, I mean, Colorpoint Shorthairs) when I finally get to move to Sweden.

Today’s cartoon is a bit unorthodox, as it not only doesn’t include an Abyssinian, but it doesn’t even include a cat! However, the reason for its posting will become clear in the next few days’ posts. 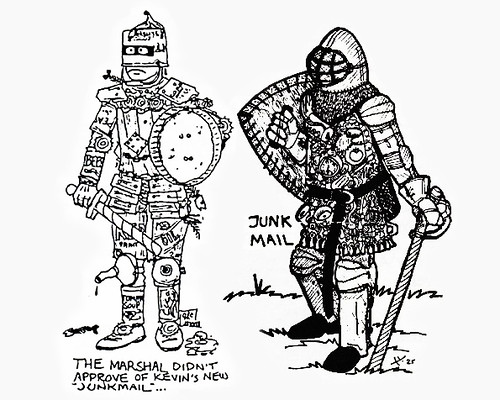 On the left is a cartoon drawn in 1990 by my friend Björn Hellqvist. The one on the right was drawn by me around the same time. But I’ll let Björn explain it: “To elaborate further, let me tell you how it came to be that a girl in California and a guy in Sweden got in touch in 1992. Back then, both of us were active in the SCA (Society for Creative Anachronism). We both drew cartoons, I for my local newsletter, Koshka for both her local newsletter and the society-wide quarterly, “Tournaments Illuminated” (TI). In 1990, I drew a cartoon based on a pun, and had it published in the local newsletter. A couple of years later, I was surprised to see the same pun repeated in TI. Looking closer, I saw that the new cartoon was drawn in 1990. The artist’s name and address was published in the back of the magazine, so I made a photocopy of my cartoon and sent it to her together with a letter. She replied, and by comparing notes, we concluded that we had drawn our respective cartoons within a three-week period back in 1990. We got along really well, and started writing each other, sending letters, photos, small gifts, etc. After a couple of years, we had our first phone call, and in 2000, Koshka came to Sweden and visited me and my then-partner for a week. We’ve kept in touch through the years, sometimes a bit too long between a few occasions, but always coming back for each other. We have both gone through some rough spots in our relationships with others, and when Koshka needed to chat a couple of months ago, she confessed that she had been secretly in love with me since her visit 15 years ago. I was surprised, but then realized that she was more than a friend to me, too. We want to live together, so she has filed for divorce and applied for a Swedish residency permit (similar to a green card). We are engaged, and will marry next year. Last week, I visited her for five days in Boston, and we just further confirmed that we are intended for each other. So, it started with a pun, but got serious eventually. Yet, we still laugh a lot together, and that is something central to our relation, together with love, honesty and respect.”

So. Here’s the 25-year-old cartoon that’s led to a fairly epic tale that will be unfolding here on my blog as well as in real life.