END_OF_DOCUMENT_TOKEN_TO_BE_REPLACED

On December 23, Gun-Hee went to see Dr. Parker at Porter Square Veterinary. He was his typical fearless self…

END_OF_DOCUMENT_TOKEN_TO_BE_REPLACED

Tessie, Gun-Hee, Kylie and Patrick on the cat tree: 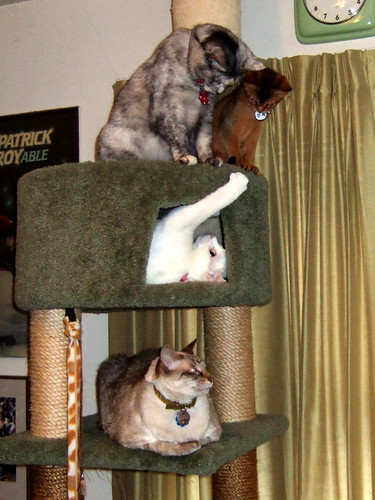 We heard a sound in the front room, and when we went to see what it was, we found…Gun-Hee up the Christmas tree. We do not condone this behaviour, and he got taken down straightaway…as soon as I snapped some photos.

We were amazed; for such a small kitten, he climbed so high! In I don’t know…40-odd years of cat ownership, I have never had a cat who even tried to climb the tree, much less suceed at it. Those cat books don’t lie when they say Abys are daredevils!

We brought Gun-Hee home on Dec. 15. We’d intended to keep him quarantined in the bedroom until next weekend when he has a vet appointment…but he had other ideas. He’s actually fitting in amazingly well with the other three cats. Kylie was the first to accept him, then Patrick, and finally this moning, Tessie seems to be at least resigned to his existence.

It’s so hard to be at work when Gun-Hee’s at home, all alone and bored (we don’t let him out with the big cats during the day yet)…he was such a terror this morning. So cute. After I gave him his Clavamox and wiped his face, he fell into the tub while I was taking a shower and needed to be blow-dried, he attacked the toilet paper, he tried to eat my oatmeal, he almost jumped on the kitchen counter because the coffeemaker was going, he chased Kylie, he dragged not one, not two, but three toys the length of the apartment, he actually played with Tessie (and she was playing back!), he batted Patrick’s tail and he helped me type emails…and then, when I left for work, he ran out the door and ran halfway around the hallway in the building (it’s one of those ones that circles around a courtyard), happy as could be with his tail straight up in the air. And he was purring pretty much the entire time.

That was just in an hour and a half. No wonder I’m tired! He’s seriously like one of those toys that you wind-up and it careens around the room, changing directions when it hits something.

Once I get through the insane amount of pictures we took this past weekend, updates here will be more frequent…and more regular!

Today Gun-Hee is coming from New Brunswick to Boston – we pick him up this evening!