Last week, I posted about Buying Gun-Hee a coat so I can take him out in Boston’s winters. Well, today, Gun-Hee’s parka came in the mail. I am very impressed with how well made it is. It’s a miniature parka, just like we would wear, but with no pockets and velcro instead of a zipper to close it up. The hood snaps off, and it has a drawstring to close it up against the wind.

But, even more telling, when I tried it on Gun-Hee today…he started purring.

END_OF_DOCUMENT_TOKEN_TO_BE_REPLACED

Even though it’s only mid-August, there’s been a faint chill in the Boston air recently that whispers of what’s to come. As hot and as humid as it can be here, it’s only temorary, fleeting…soon enough, Fenway will close its doors again, the sun will set at 4pm, rings will appear around the moon, and snow and ice will clog the city’s arteries.

In the midst of all this putting on a pair of sandals while thinking of snow boots in the back of my head, I thought of Gun-Hee and how much he enjoys going out on adventures. In the summer, it’s easy. But I hate for him to have to give them up in winter. Some days, while cold, are still quite fine, and he can always ride the T…

But he’s a very shorthaired shorthair, and he feels the cold quite easily. So…I looked around a bit, and ended up ordering him this for $10.99 on Amazon.com (it was the last one in a size Small). It’s his colour, and it has a hood to keep his ears warm…Of course, I have no idea whether or not he’ll actually wear the thing, but for $11 it’s worth a shot…and somehow, something tells me he just might put up with it, if it means he gets to go out in his carrier once in a while…

I was in the shower last night, so I missed this, but as soon as I came out my husband crowed that he had “the best Gun-Hee story ever!”

My husband had been changing the water filter in the refrigerator, and Gun-Hee was helping, as usual. But as he was finishing, Gun-Hee began to frantically scratch at the underneath of the kitchen cabinet next to the cats’ feeder. My husband, who thought maybe he was after a toy or something, told him to stop, picked him up, and took him out of the kitchen. Gun-Hee came right back, though, and continued his attack on the cabinet. He was lying on his back, and he was even biting the wood! My husband couldn’t figure it out; there’s nothing in that cabinet that’s of any interest to cats. Their extra dry food and cans are stored in different cabinets. My husband looked all around and could find nothing to explain Gun-Hee’s obsession with the cabinet. He yelled at Gun-Hee to knock it off and evicted him from the kitchen again.

Of course, Gun-Hee came right back. Abys are known to be determined, but this was above and beyond the typical Abyssinian perseverence! Finally, he said, “Okay, all right: look. There is nothing in there. See?” And he opened the cabinet to show Gun-Hee there was nothing inside to warrant his frantic campaign…

And there was Tessie, shut up in the cabinet. My husband had needed a little vegetable oil to lubricate the gasket on the new water filter, and when he went to get it, Tessie evidently snuck inside without being noticed. But Gun-Hee knew she was in there, and he wasn’t going to rest until she was out again!

Such a brave little cat!

I managed to recreate the scene tonight…

(Recreation was done by shutting a treat in the cupboard…not Tessie!)

On our walk on Saturday, Gun-Hee and I met a little girl named Shelby and her mother in the Binford Street Park. They were just leaving as we arrived, but Shelby said hello to Gun-Hee and asked to pet him.

On Sunday, as I was taking the photos of Gun-Hee in the heather, I heard a young girl cry, “Oh, look! That kitty’s here again!”
She petted Gun-Hee some more, and then my husband gave her the sparkly wand toy that he’d brought along with us for Gun-Hee to play with. The pair of them had a pretty good time playing with it

It’s hard to say, actually, who had the better time…

You can’t exactly tell from the photos, but Gun-Hee was playing, too, and seemed to enjoy it.

This started out as Shelby shaking hands with Gun-Hee, but ended up as sort of a hug…I was so proud of him, though. He’s so patient and tolerant with little kids, and he really has no right or reason to be, never having been exposed to them before. He’s just that good natured. It’s this quality more than any other that makes me think he might be a good therapy animal. I could totally see him visiting the cancer kids at Dana Farber (the ones you always see during Red Sox games)…I think he’d be good at it, and I think it would be enjoyable for both sides. I’m looking into it, getting trained, but I really wonder about “co-ed” classes since Gun-Hee is so anti-canine. I also haven’t found any in Boston that I can get to without a car…but he’s young. There’s time.

I love how the plantings at the Binford Street Park change with the seasons. In the spring it was first crocuses, then tulips and daffodils. Now, it’s heather. Gun-Hee posed nicely in its midst, watching the bees on a lazy Sunday afternoon…

END_OF_DOCUMENT_TOKEN_TO_BE_REPLACED

For breakfast on Sunday morning, I made Japanese-style scrambled eggs with beef. I turned around to close the refrigerator door, and when I turned around I discovered I’d acquired a sous-chef.

Gun-Hee is the very epitome of an urban cat. 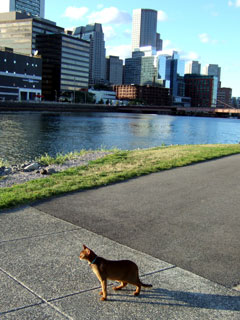 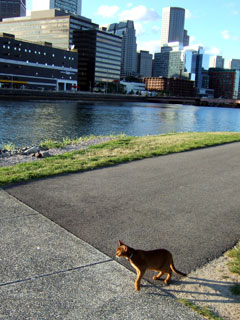 I actually Photoshopped his leash and harness out of these photos. Worked really well: I can’t tell… 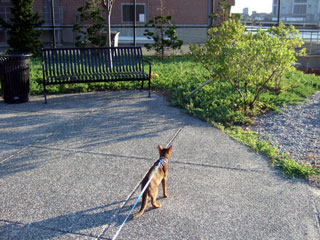