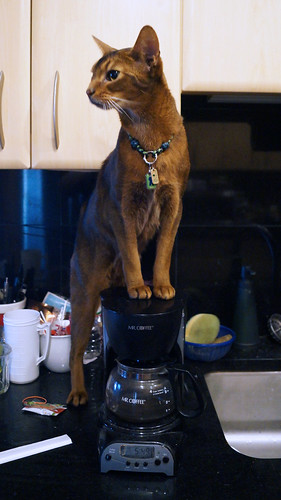 Jacoby uses the coffeemaker, along with all the other countertop appliances, as a place to stand when I tell him to “get off the counter.” 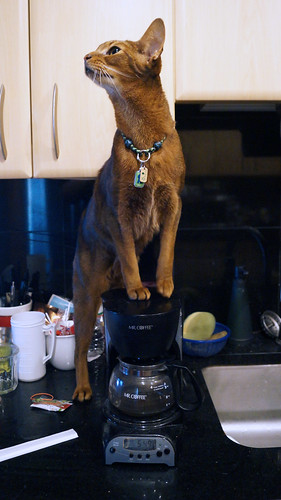 Because the last thing Jake needs is coffee. Can you just imagine? A caffeinated Aby? 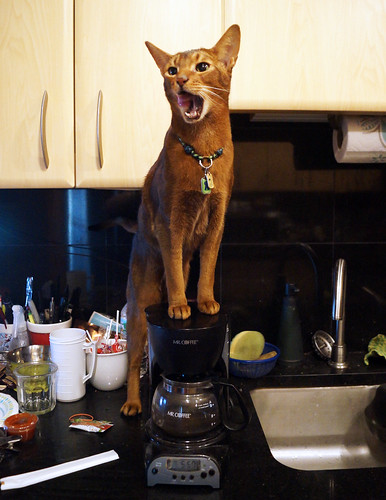 “Coffee? Sounds delicious! Yes, please, may I have some?” 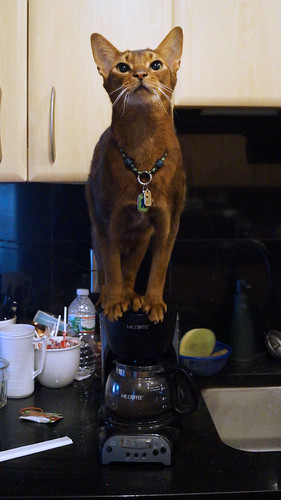 NO! Now get off the counter, Jake. 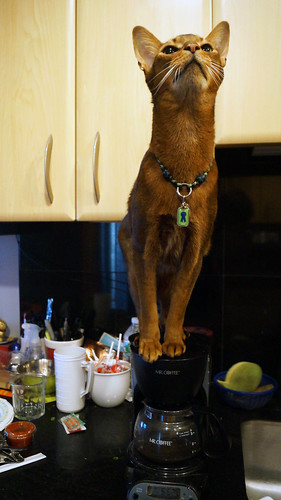 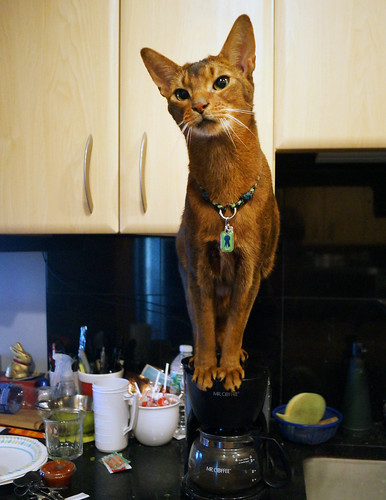 But you still can’t have any coffee.

So sad to announce this…Jacoby has lost an uncle.

Last week, Sherry posted: “My 6 year old Wild Bill, the most playful and affectionate cat I’ve ever known, is in the hospital in critical condition tonight with sepsis after being blocked with urinary crystals. He has been in the hospital since Saturday morning and was seemingly recovering until this morning when he started to look weaker and ended up in septic shock from infection. I love him so very much and pray he makes it home soon – he’s missing rubs on his head and his favourite toy, Tim Horton coffee stir sticks – like so many people, he needs his Tim Hortons everyday.”

And then today came this sad news: “I am so broken hearted to let everyone know that my sweet boy Wild Bill passed away yesterday morning. I had him back to the vet the night before because he still did not have any appetite and seemed to be getting a bit worse rather than better with a below normal temperature. They gave him injections for pain and appetite but by yesterday morning he was very weak and a couple of hours after his morning syringe feeding he was barely able to walk and as soon as I saw his mouth open to breath I called my vet and rushed him right in – by the time I got there his heart had already stopped. I had no idea he could end up that bad that quickly after a urinary blockage. I am devastated to lose my Wild Bill – he was truly a special cat and will remain forever in my heart”

Wild Bill was Jake’s uncle. He was a younger sibling of Scar’s (same mother and father, but from a different litter). He was from the last litter of Ginger x TJ, born 3 May, 2010 – an uncle younger than Jake!

But it’s scary because Jake, too, has urinary crystals. He’s never had a blockage, but it’s serious motivation to make sure he only eats UT food.

My heart has joined the Thousand, for my friend has stopped running today.

Most people are familiar with the concept of “I licked it, so it’s mine.” 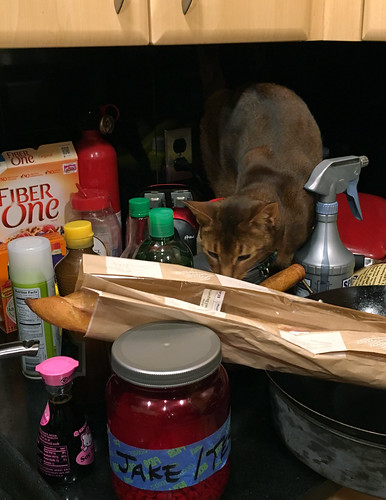 Abyssinians have perfected this idea and made it into an art form. 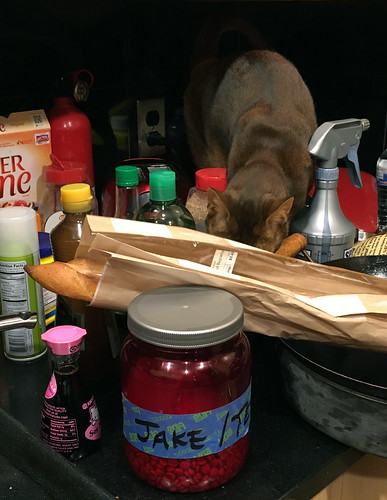 Take, for example this poor unsuspecting baguette that did nothing wrong. It was simply brought home from the grocery and set down on the kitchen counter. 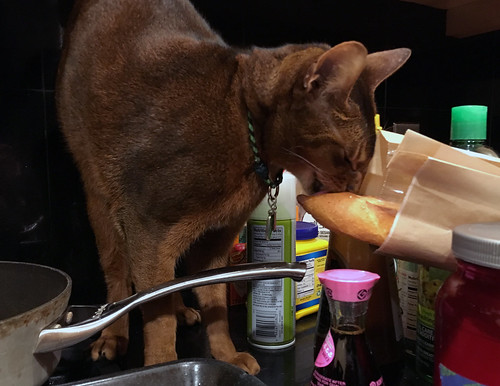 And just look what happened! 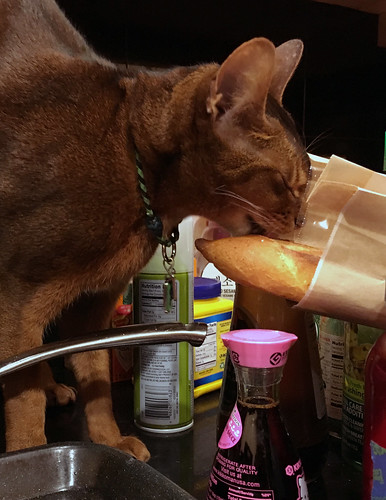 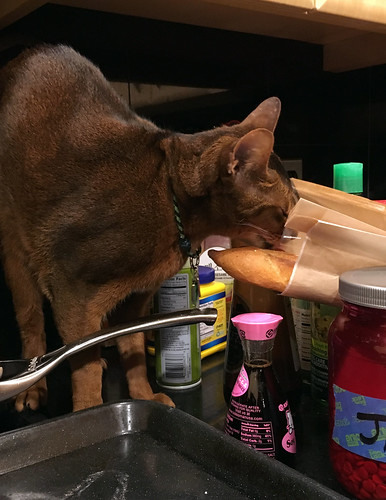 And was Jacoby content with merely licking the part of the loaf that was sticking out of the bag? 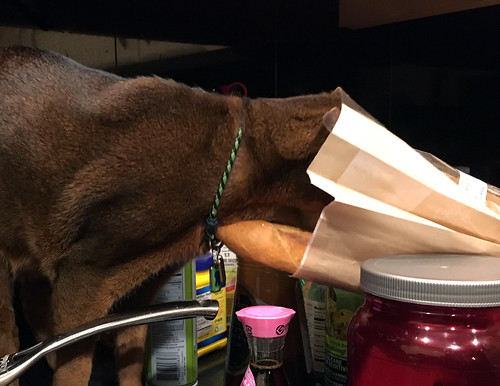 No, of course he wasn’t. 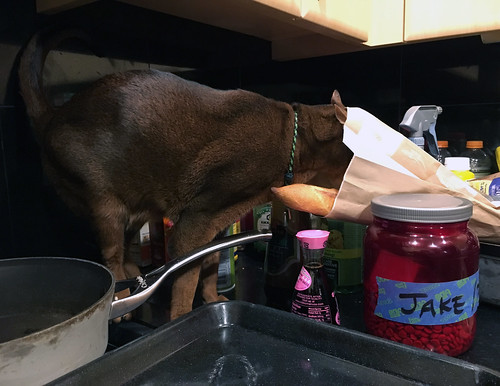 He folded his ears back and pushed his head and raspy tongue in as far as he could to lick as much of the bread as felinely possible. 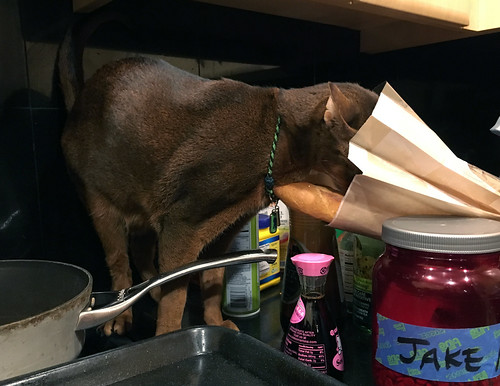 He would have bitten into it, too, but the crust on a loaf of French bread is pretty hard, so Jake had to content himself with licking. Biting it would be too much work. 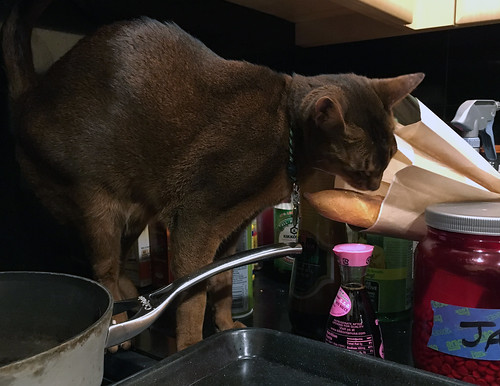 What really gets me, though, is his sheer brazenness and chutzpah. I mean, I was standing right there, watching him. He licked it anyway. So there, humans. 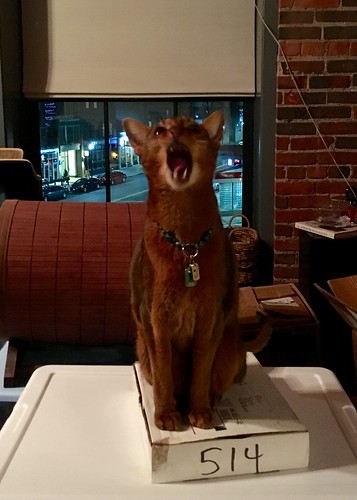 When we were at Manchester City Hall filling out the marriage license application, I noticed that there were crayons and scratch paper out for kids to entertain themselves. 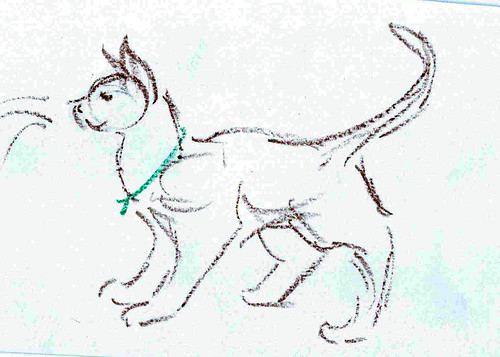 So, while I was waiting for the Justice of the Peace to type out a proof copy of our marriage certificate…I entertained myself.

Björn and I went to a Red Sox game while he was here last week. We brought mini-Jacoby with us, but…I completely forgot to take photos of him during the game. 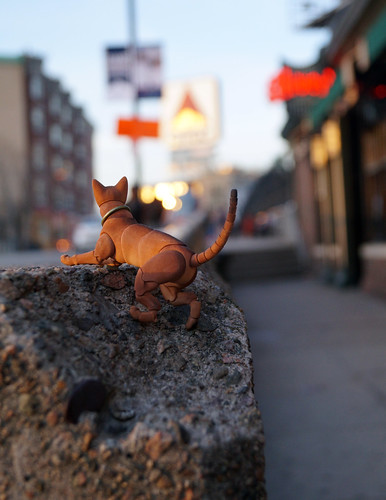 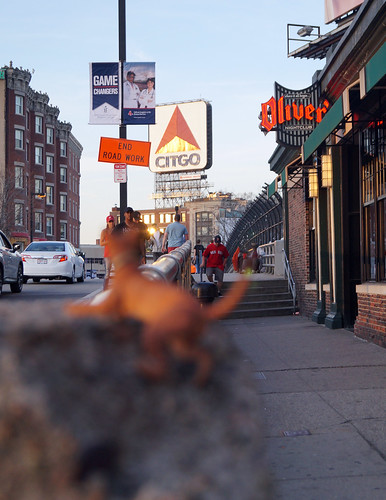