Despite meeting Björn in 1992, he will be my – gasp! – third husband! My first husband and I were both members of the Society for Creative Anachronism, and we got married in medieval garb. Our wedding was held on New Year’s Eve; we had the reception first and then got married just before midnight. The SCA’s big holiday celebration (and dress-up event) is Twelfth Night, and in the West Kingdom it’s typically held the first Saturday in January. 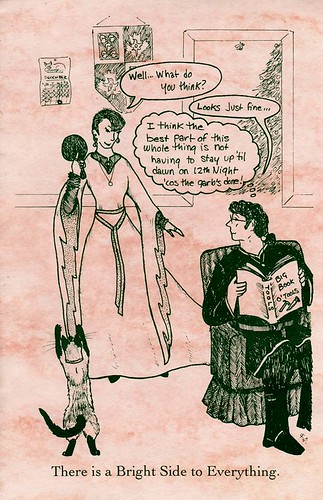 This was my Christmas/12th Night card to our friends in 1992, and of course I sent one to Björn. He recently found it and, since we’re getting married in less than two weeks, I thought I’d share it because it also shows my Siamese, Harri. Harri actually came to the wedding as Best Cat and had a wonderful time. Harri was actually quite the party cat – I think he and Jacoby would have been great friends.