I caught Gun-Hee eating out of the extra food storage bin yesterday. 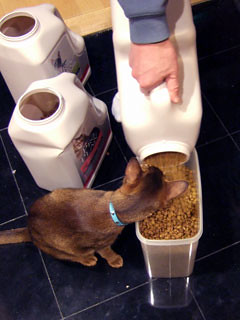 END_OF_DOCUMENT_TOKEN_TO_BE_REPLACED

I have no idea, because I can read Korean, but not Japanese…

I found another one by the same person, with the same Abys…

Sunday was Veteran’s Day. It was also a one-day CFA cat show in Hudson, MA
Gun-Hee was seen by six different judges, but he was still an Open (an untitled purebred), and he wasn’t marked higher than the Premier and Grand Premier he was competing against. That’s all right, though; it was great experience for him, and after this show, he is a titled purebred. He is now Premier Pellburn’s Prince Gun-Hee. And that is not bad at all.

Here he is being judged by Norm Auspitz, the author of CFA’s Abyssinian Breed Article.
END_OF_DOCUMENT_TOKEN_TO_BE_REPLACED

It is, however, shiny.

I’ve done the bottom so far, but not the top rack.

END_OF_DOCUMENT_TOKEN_TO_BE_REPLACED

When I do laundry, he’s right there, sprawling all over the warm clothes fresh from the dryer!

Gun-Hee walking home along the Harborwalk.

This is pretty much realtime…I trimmed a bit off to make it fit the music, but apart from that, it’s roughly 6 solid minutes of how Gun-Hee walks when we go out.

Last weekend, when it finally stopped raining, I took Gun-Hee out for his first walk wearing his parka.

In his carrier before going outside…

Outside on the grass…it was a little chilly,
and I think he was glad to be wearing his coat.
END_OF_DOCUMENT_TOKEN_TO_BE_REPLACED

The breed summary for this weekend’s CFA show has just been published!

There are only 12 Abys entered: 3 Kittens, 2 Opens in Championship, 3 Champions, 1 Grand Champion, 1 Open in Premiership (that’s Gun-Hee!), 1 Premier and one Grand Premier.

Gun-Hee competes only against the other Abys at Open level; since he’s the only one, he’ll take a Winners ribbon in each ring. Then, they’ll judge the premiers and grand-premiers are judged against themselves. After that they’ll do best of colour(s) (I don’t know if all the Abys will be the same colour as Gun-Hee, Ruddy, or if there are any Reds, Blues or Fawn; Gun-Hee only competes for best of colour with the other Ruddys) and then they choose best of breed from all of the premiers…at which point he’s competing against the other two Aby who have already earned their Premier- or Grand Premiership. He also picks the best Premier in each breed (which won’t be Gun-Hee because he hasn’t got 6 winners ribbons yet). Then the judge looks at all the other premiership cats. Then he picks the top 10 out of all the premiers entered in that ring (long- and shorthair since this is an allbreed show).

So that means that, unless he gets disqualified again in every ring, he’ll earn his premiership after this show. That will be nice. I’ve been grooming him a lot, removing the dead undercoat to reduce any greyness…hopefully, that will do the trick. His colour is really getting amazing; he looks like he’s made of burnished copper.

I’m pretty psyched, though: we’re seeing two judges that we saw at his first show. One of them, Norm Auspitz, wrote the CFA’s Abyssinian breed profile, so he’s an “Aby-Friendly” judge. He didn’t place Gun-Hee very highly the first time, so it’ll be interesting to see how he does this time around. The other “repeat” judge is Paul Patton; he is the judge who awarded Gun-Hee his first 2nd Best of Colour and 2nd Best of Breed. I’m interested to see what he thinks of Gun-Hee now that his colour is more developed. Historically, Gun-Hee has done well in his second trip to a judge’s ring; he was judged by Marge Collier in his first and second shows. The first time, he didn’t earn any ribbons, but the second time, she named him her Best Kitten!

Tessie is going to the show, too, as a Household Pet. There are only 8 other HHPs entered, so I’m guessing they won’t be doing a best of 10 format. She should do well, though, perhaps even better than she did in the last show, since this time she’s done it before.

I got curious about Cinnamon, the first feline to have her genome mapped. So I did a little googling and found some more info on her.

This article from the Telegraph explains the experiment rather better than the American version did, I think.

Science Daily explains that cats have 250 hereditary diseases, many of which have human counterparts.

ScienceNOW takes a rather cutesy approach, making it more about the cute kitty than about, you know, science.

Genetic Archaeology, despite its lofty name, has a rather basic rehash of the same story…but, unlike the others, actually explains (albeit in a photo caption) exactly how Cinnamon donated her DNA.

The best article I found came from Illumination, the University of Missouri-Columbia’s online journal. This is not terribly surprising, since this is the university where Kristina Narfström, Cinnamon’s breeder, does her research. But it’s the only story about Cinnamon’s background.

Interestingly enough, it took some looking to find the original source article from Genome Research. For some reason, the other articles gloss over the fact that Cinnamon’s line is known to carry the gene for retinitis pigmentosa…which may be why the other articles don’t mention it. Realistically, you shouldn’t breed Abys (or any breed of cat, for that matter) with known genetic defects. Granted, it’s in the name of science and everything…but still, she’s pretty much destined to go blind. And that makes me a little sad.

However, my favourite take on Cinnamon is the one in UC Davis’ “Egghead” Blog. Not only does it take a local angle, referencing a UC Davis geneticist, but it finishes up with a joke: We now await the LOLCat genome: “I’M IN UR DNA SEQUENCING UR GENEZ!”

Gun-Hee is so crazy! I have to post a bunch of photos in his journal, as well as a movie of him walking while wearing his coat, which I have to edit…

I also want to see if I can capture him chasing a milk ring when he plays fetch…he doesn’t just leap after it, he sort of springs STRAIGHT UP like a springbox, only with a forward motion and hangs in the air for a split second before landing. Half the time he catches or almost catches the ring I’ve thrown in mid-air. He is seriously like no other cat I’ve ever had.

“An Abyssinian cat from Missouri, named Cinnamon, has just made scientific history. Researchers have largely decoded her DNA, a step that may aid the search for treatments for both feline and human diseases.”

Before Gun-Hee, I had Siamese, and they have their own genetic abnormalities…but Abys aren’t quite as well-known a breed as Siamese. It’s good to see them in the spotlight.

Another article about Cinnamon says her ancestry goes back to Sweden. Gun-Hee has ancestry in Finland and Denmark (his mother is a Danish import), but not Sweden. Still, I wonder if he and Cinnamon are distantly related? It’s actually possible…