What is an Abyssinian?

I found this during a random Google search, and it cracked me up. What hit closest to home was this list of ways your life changes once an Aby joins your family:

END_OF_DOCUMENT_TOKEN_TO_BE_REPLACED

The one word that keeps coming up when you start reading about Abyssinans and their personalities is “Busy.”

“Busy.” Yeah, okay, if by “busy” you mean, “freakishly unable to rest until everthing that can be moved has been,” then yes, I can totally agree with that.

Of course, this is coming from someone who was woken up several times last night, the last time to see a very small ticked brown cat attacking a very large garbage bag full of clothes bound for Goodwill…

No matter how large the target, Gun-Hee is ready and willing (if not always able) to attack it full-on.

I come from the world of Siamese…Siamese are a walk in the park compared to Abys.

In the condo, we only have a very short cat tree with only the most basic scratching and lounging accomodations (unlike the floor-to-ceiling tree we have in Somerville). Gun-Hee has this very raggedy pagoda that we would put on the top of the cat tree’s shelf…

Which is one of his favourite places to nap.

END_OF_DOCUMENT_TOKEN_TO_BE_REPLACED

Patrick and Gun-Hee have very little in common…except for the fact that they were both born in the Year of the Dog, 12 years apart. They almost never cuddle together, unless Patrick is on the heater bed and Gun-Hee wants it all for himself. So it was rather charming to find this scene when I woke up yesterday morning…

After going to work with me, Gun-Hee walked home with me, too…

And when we get home, he rides the elevator just like any other working stiff. 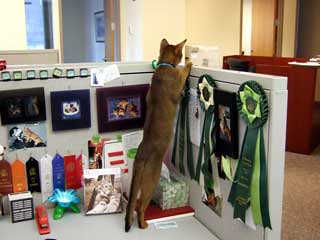 I love this one…He’s not really looking at anything,
but it looks like he sees something fascinating. 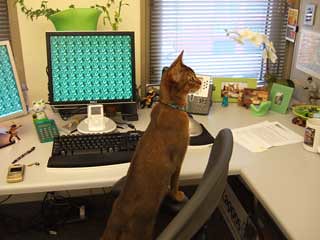 I think it’s cute, him sitting at my desk. 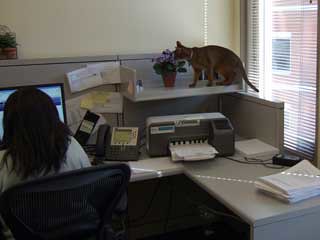 Here he is visiting my co-worker Julia. 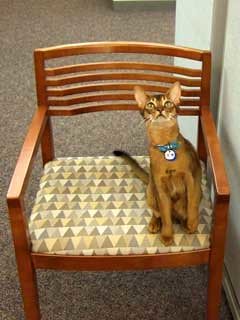 I love this chair – it’s the only one we have like it. It looks good on Gun-Hee. 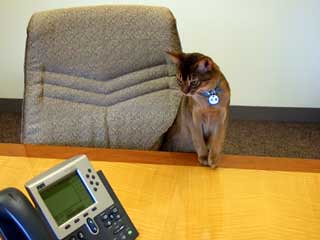 In the conference room… 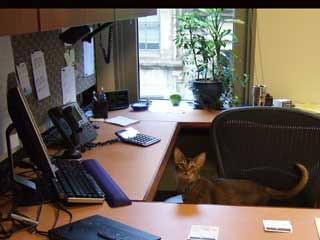 …and at John’s desk, pretending to be the boss.

This is the first batch of photos of Gun-Hee at work. These four I deemed worthy of LOLcatness. Since we’re in the office, I thought that the “Sucessories” style was particulary apropos…

This is what happens when cat meets office.

END_OF_DOCUMENT_TOKEN_TO_BE_REPLACED

It would be hard to convey the hilarity that ensues chez us every Sunday morning when the newspaper gets brought in. Even these photos don’t really capture it…

This is the Mother’s Day card I got this year. I can’t decide what amuses me more: The picture on the front that looks like him, or the wording on the inside that sounds like him! Here’s the ourside…

END_OF_DOCUMENT_TOKEN_TO_BE_REPLACED

I have written previously about how much “Links,” the Microsoft Office assistant in feline form reminds me of Gun-Hee. Well, since he got his new, turquoise blue collar, the resemblance is even more striking!

What kills me is the sound effects; the purring and meowing really sounds a lot like Gun-Hee.

This would be the “looking for toys under the sofa” shot.

I think this is the one that reminds me the most of Gun-Hee: the Kitten of Mass Destruction.

But then, this one, too, captures him pretty well…he does sleep like this!

So, before he was born, when we were in Japan, I bought Gun-Hee a collar at Pet City in Tokyo. We bought one for all the cats including my future boy kitten. Of course, he was too small to wear it at first. But after we got home from the last cat show, I put it on him.

That was May 6th. On May 16th (his 8 month birthday) I noticed it was starting to get chewed up. I mean, really chewed up.

That’s after only ten days of wearing it! Ten days!

I have no idea why he decided his new collar needed to be chewed. None of the other cats saw a need to chew on their collars (well, okay, the girls didn’t, and Patrick couldn’t given his whole lack of teeth situation)…But I mean, Japan. Kimono fabric. Not like I can just go down to the shops and get him a new one, you know?

And I figured out why he was chewing it, too. He was trying to chew it off. Because for a few weeks before the cat show, I took his collar off so that his neck wouldn’t have collar-hair. He wears tags on his collar – all the cats do – partially in case they get out, but also because it helps us to keep track of where they are by the sound of their tags. So guess who’s decided he doesn’t like making noise? Without his collar, he can sneak up on the other cats, and he can get into more trouble before we catch him at it.

I know that’s what he’s doing too, because when he gets tired of wearing his harness, he chews at the buckle. Not the other side, only the side where the buckle is, because he knows that’s how we put it on and take it off.

So I got him a new collar on Wednesday. Leather with little diamond studs. I think he looks really cute in it.

But now, here’s the thing: I noticed yesterday that he has already started chewing the new collar!

Sigh. So I took it to my house, got out my tool box, and put some rivets in the collar where he’d been chewing it.

I also trimmed the end…because he’d been chewing that as well.

As a friend said when I told her the story, “You weren’t kidding when you called him the Kitten of Mass Destruction!”

So I drew a little picture of Gun-Hee with a party hat and a birthday cake on the back of the envelope. 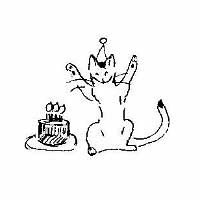 Today, I wondered what it would look like in colour. Taking colours from an actual photo of Gun-Hee and using the rubber stamp tool in Photoshop, I came up with something that, I think, looks pretty decent. 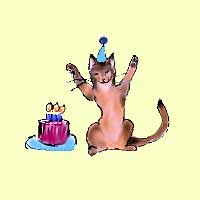 When we got home from the cat show, Gun-Hee crashed on the sofa.

END_OF_DOCUMENT_TOKEN_TO_BE_REPLACED

A few more random photos from the show…

END_OF_DOCUMENT_TOKEN_TO_BE_REPLACED

Gun-Hee didn’t do as well on his second day at the show. It was a lot colder in the show hall (which was also a hockey rink!) and the judges were moving more slowly…in a couple of rings they called the kittens up to their rings long before they were needed, and those little show cages are not as warm as the benching cages!

So his eyes started to tear up and run, and he also started sneezing a little. He was fine in the morning, in the hotel before we got to the show…but he didn’t get one Best of Breed, and, consequently, didn’t make any finals. However, I don’t think the other Abyssinian, the little red girl, made any finals, either. It wasn’t a good day for Abys in general, I think.

END_OF_DOCUMENT_TOKEN_TO_BE_REPLACED

Gun-Hee’s second cat show started off very well. There were only two Abyssinian kittens entered, and the other one was a different colour than Gun-Hee, so it was basically a battle for Best of Breed in the kitten class. On the first day of the show, Gun-Hee was named Best of Breed two out of three times.

END_OF_DOCUMENT_TOKEN_TO_BE_REPLACED

We have this foldable show cage, but we leave it up all the time so that Gun-Hee and Tessie are used to it. Gun-Hee uses it like a sort of club house. We used to put him in it when he was naughty and now, when he knows he’s being bad, he just runs into the cage (which works because we’re like, aw, how cute he knows he’s bad and he’s punishing himself).

So Kylie rarely goes into the show cage. But the other morning she was in there and Gun-Hee was watching her from outside. Then, I heard crunching. I reach in and…lo and behold, two chewed-open bags of treats! These had been in a pocket of the cat show bag, jammed way in there. So I’m sure Gun-Hee worked on them to get them out of there, and when he did, he took them over to his cage because he knew it was “bad.” Then he goes tells Kylie there’s treats in his cage, can she please go open them so they can eat them?

Abys are smart. He figured out how to unzip his cage at the last show; we have to put little carabiners on to keep the zippers together.