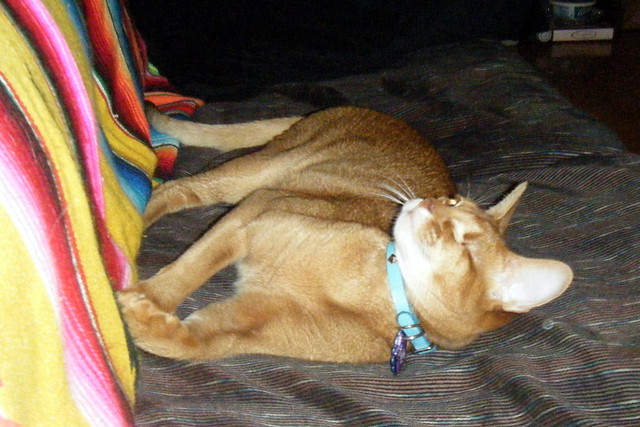 December 15th is Gun-Hee day. That was the day we got him.

This was our first photo together.

I can’t believe it’s been almost 6 months since he died.

His brother, Rusty, also died from FIP on October 10. Their mother, Amber, also passed away shortly after. The cause of her death is not known; last I heard they were doing an autopsy to find that out. It was very sudden.

So much sadness in the little cat family.

I miss him every day. He was my little buddy.

I know I stopped the “Gun-Hee a Day” project 50 days short. I truly intended to finish it, but the truth is…I got to the point where I wasn’t sure if I was posting new photos or repeats…and since there’s no way to take new photos, I just stopped. When I started the project, it was beyond comprehension that he wouldn’t be alive at the end of the year.

That being said, I will continue next year with Angel, the little one-eyed Aby rescue that Gun-Hee found for me. You can follow her story at .

Thank you for being a part of Gun-Hee’s life.

Angel posing on the sofa.
I have a lot of photos of her to post…the reason I haven’t posted them yet is, basically, technical difficulties. So please stay tuned.

When I adopted her, Angel’s foster mom told me that sometimes she’d see Angel playing with invisible things in the air that she thought might be shadows in her good eye.

I hadn’t managed to catch her doing this, until tonight. She’s on a roll, batting at things only she can see. It’s adorable.