I brought home a bunch of balloons the other day for Gun-Hee. I knew he’d never seen them before, and I was curious to see how he’d react. 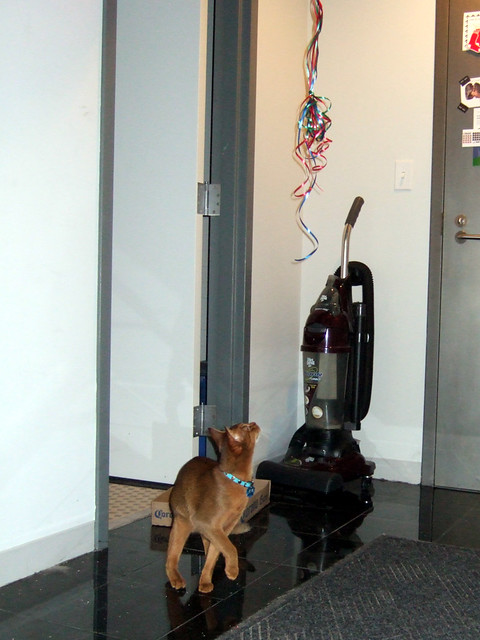 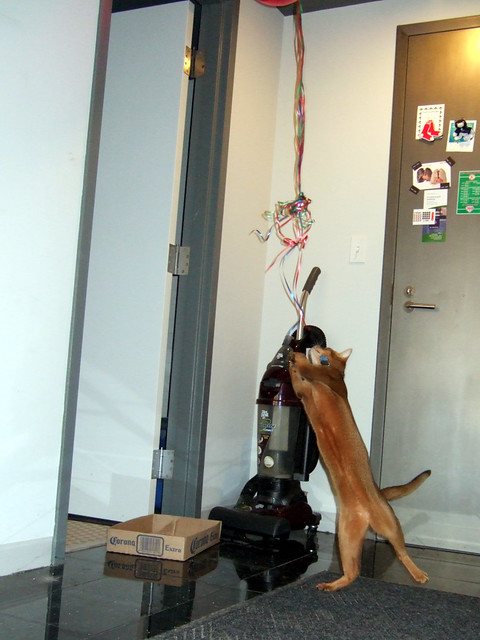 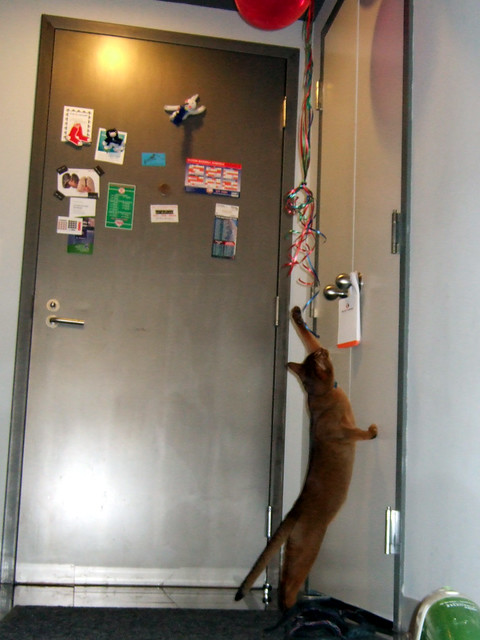 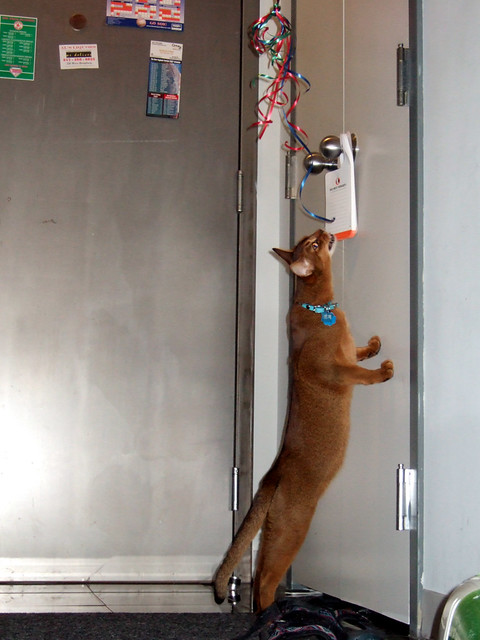 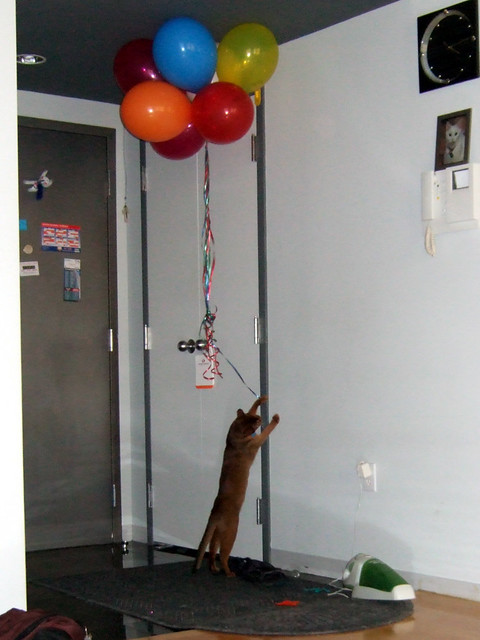 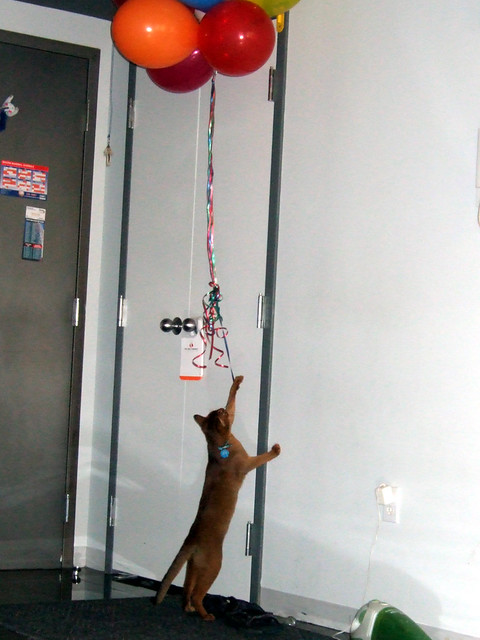 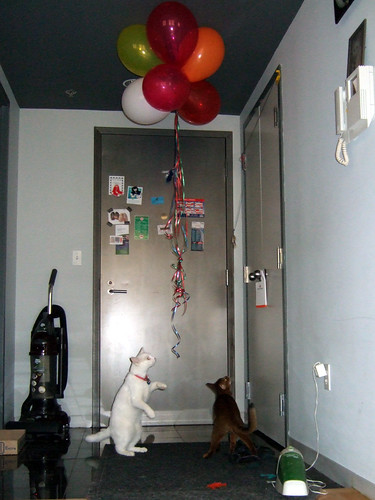 Kylie gets into the act, too… 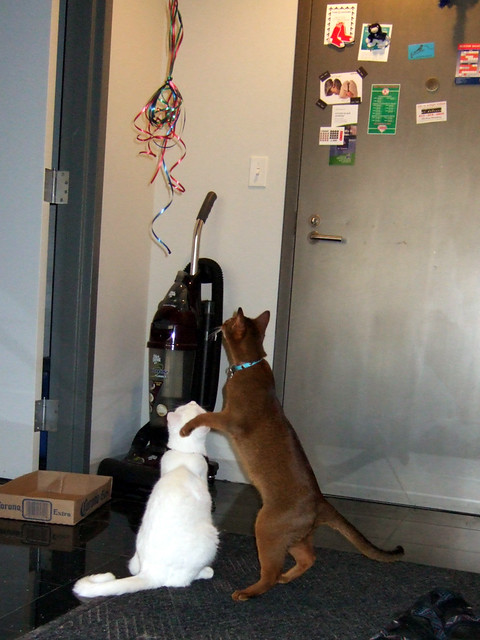 …but not for long! 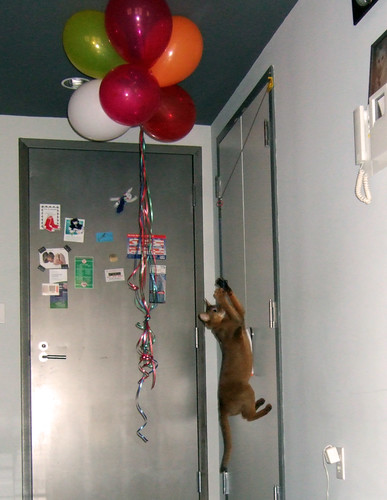 Gun-Hee can jump. Better than any cat I’ve ever known. Later on, he figured out how to pop the balloons, pretty much on demand. Far from being scared at the sound they made when he popped them, he seemed to enjoy it.

Today is Gun-Hee’s first birthday. I can’t believe my kitten is one year old.
It was a good day for Gun-Hee. We went out for a walk, he got presents…and, of course, he got his first birthday “cake,” a can of cat food with a candle in it…

I just got this voicemail:
“Okay, so I’m in the living room, checking my email, and for like, an hour, I didn’t know where Gun-Hee and Tessie were because I didn’t see them. Then, I start hearing meows and scratchings, and I’m like, what the hell is going on? So I try to look for them in the bedroom, and they had some project going underneath the desk. What they had done was, Gun-Hee had gotten one of the fish filters and ripped it apart, and the charcoal inside was all over the place and Tessie was batting it around! The filter was completely empty and I spent like 20 minutes vacuuming it all up. Bad kitties!”

I called back to get the full story, because the filters are assemble-yourself ones and I make a few ahead and keep them in a cheap “tupperware” take-out container with a cracked lid for ventilation. Evidently, Gun-Hee had chewed his way through the lid to get the filter! While I was on the phone, it was discovered that he’d also knocked over the pitcher of extra fishtank water. Not only that, he’d also worked open the feeding door on the top of the tank and had been sticking his hands in.

(In relaying the story to my stepmom, she asked, “‘Hands?’ You mean, paws?” And I said, “No, with Gun-Hee, they’re really more like little hands, the way he uses them.”)

It’s funny, though, because he really hasn’t paid much attention to the fish since February…but apparently he’s rediscovered them!