Gun-Hee cracks me up…
he acts as though it’s his job to investigate every box in the house.

Gun-Hee loves it when we get deliveries. All the delivery guys know him, too.

Gun-Hee is the most trusting, loving cat I’ve ever known. His absolute fearlessness comes from his unshakable confidence; he trusts because he is certain that he is loved.

END_OF_DOCUMENT_TOKEN_TO_BE_REPLACED

Here is Gun-Hee with my Gourami, Shula. I got Shula last January at Petco. He’s named Shula because he’s turquoise and orange and he’s shaped like a football…and I got him in January. He’s actually got quite the personality for a fish. Gun-Hee gets very interested when I feed Shula; I’m not sure if it’s because he wants to eat Shula’s fish food (Gouramis are carnivores, so it’s fishy fish food)…or if he wants to eat Shula.

(And if you’re wondering about the choice of pronoun, yes, Shula is actually a boy fish.)

Here’s Kylie. Kylie is a native Bostonian, born in Quincy, adopted from an ad on Craigslist in 2005. She had a white brother and sister when we went to pick her up; her mother is an odd-eyed white cat named Mary Jane. Kylie is a lot bigger than her mother was. When she was smaller, she had two blue tabby “racing stripes” on her head, but as she got older, they faded and now you can’t see them unless you look very closely, and even then it’s only a few hairs.

She was the first cat to accept Gun-Hee when we brought him home. She knows the word “treats” and we can’t say it in front of her or she’ll go into the kitchen and wait til she gets some. Here is Kylie and Gun-Hee, waiting for treats.

This is Tessie. Tessie, a Black Tortie Smoke Asian (TICA registered name: Bes Butterfly), was born in 2003; I adopted her from Kim Ghobrial in Oregon when she was almost 2 years old. She is our only cat to have had a litter of her own; you can see her daughter, Spot, and her son, Teddy on the website, as well as her brother, Koala, nephew, Midnight, and father, Jar-Jar.

Tessie is our “nurse” kitty; she takes care of the other cats – and us! – when we aren’t feeling well. She also loves to play with sparkle balls. Gun-Hee really interacts with her like she was his mother, but at the same time he roughhouses with her more than the other cats. These two are the more “people-oriented” cats in our family.

Gun-Hee is not our only cat. He is the youngest of four.

This is Patrick. Patrick, a Chocolate-Tabby Point Siamese (TICA registered name: Sugar Hills Twinkle Toes), was born in 1994; I adopted him when he was almost 3 years old from Carole Goodwin a Devon Rex/Sphinx breeder.

Patrick weighs almost 13lbs, and he and Gun-Hee have almost nothing in common…but they were both born in the Chinese Year of the Dog.

Gun-Hee is fascinated with everything we do. We have to chase him out of the kitchen because he likes to watch water boiling on the stove.

He’s also in love with watching the rice pot cook rice. I think he has a steam fetish.

Even the simplest household tasks get turned into comedic adventures when you undertake them in the presence of an Abyssinian. I was looking for batteries for my alarm clock. These are kept in the bottom drawer in the kitchen…

…I had some help.

Whenever we eat something, Gun-Hee is there, wanting to see if it’s edible in his book. He investigates everything we eat…And I do mean everything.

Don’t worry, we’d never let him eat chocolate…but we will let him see first-hand that it’s nothing cats like to eat. At least in the “things considered edible” category Gun-Hee is like most other cats…At least, so far…

This is what happens if you leave an empty box on the counter in our house.

END_OF_DOCUMENT_TOKEN_TO_BE_REPLACED

One of Gun-Hee’s Christmas presents was a new collar. He’d outgrown his old one. Two days ago I had to replace his new collar because he’d bitten it. I put in some extra rivets go decrease its bitability, to no avail.

Note that he has only been wearing this new collar since Christmas…so it hasn’t even lasted one month.

The problem is, as usual with Abyssinians, he’s too smart. All of the cats wear identical collars (Tessie’s is red, Kylie’s pink, and Patrick’s is black) and they all wear three tags (rabies, name & phone number, and decorative). Kylie also has a bell. No other cat has ever thought to try biting their collars. None of them has ever had a problem with their tags, either.

But Gun-Hee has figured it out. The tags make noise. Noise which we and the other cats can hear. Noise which, when we hear it on a countertop, in a closet, or stalking behind us, we know is being made by Gun-Hee. Noise which busts him when he’s trying to do something he shouldn’t.

He knows he can’t bite the tags off. But he can bite the leather. So what he’s trying to do is get his collar off so he can move freely in stealth mode.

It’s partly our fault, too…he’s had collar-free time because, about a month before each cat show, I take it off him so he doesn’t have “collar hair” on his neck. During this time, he’s experienced the benefits of silent running.

I was lucky enough to find his collar on sale for half price at Petco online. So I stocked up on them. Because I think that’s the only way I’m going to be able to keep him in collars.

This is the collar he got in his Christmas stocking:

This was taken on Wednesday. I’d put the rivets in about a week earlier to keep him
from biting it more than he already had. You can see how well they worked.

The inside of the old collar.

This is the new collar. I added six more diamond-shaped rivets,
which increased the metal coverage on the leather 66.6%.

I also riveted the end of the collar so that it wouldn’t stick out and be quite as bitable.
That was Wednesday night. Now, it’s Saturday afternoon. And he’s already managed to bite the new one a few times, despite all the rivets.

Gun-Hee stands up on the cat tree.

Yesterday, I took Gun-Hee with me to Logan Airport (“New England’s Busiest Airport”) to meet my husband. Of course, he loved it. He loves any outing…he purrs when I put on his harness!

I like this one. I wish I’d had time to really take photos yesterday when we were there.
Gun-Hee is so cute. He really does love to go on outings.

Here he is riding the Silver Line bus to Logan Airport.

Gun-Hee loves to walk from the elevator to our door in the hallway.

Gun-Hee is popular with the concierges in our building. One of his biggest fans is Chris, who works weekday evenings. She loves when we have a delivery; she has to escort the delivery guys and, because Gun-Hee loves to greet them in the hallway, she gets to see him.

There was a fair bit of snow today in Boston. By the time I got home from work, it had stopped, and it was fairly pleasant and not terribly cold…and the snow was still pretty and not dirty and scuffed. So as soon as I got home, I bundled Gun-Hee up and took him outside to see his first snow. 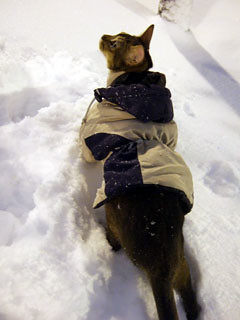 At first, he thought it was pretty amazing. 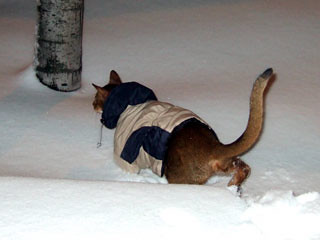 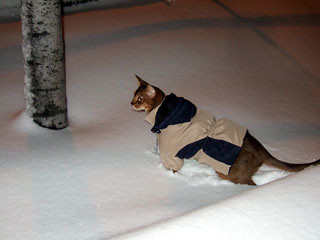 He had a pretty good time, plowing around in the white stuff. 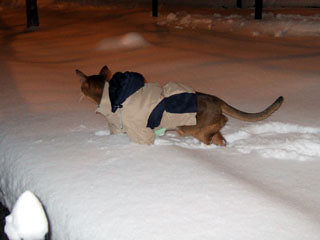 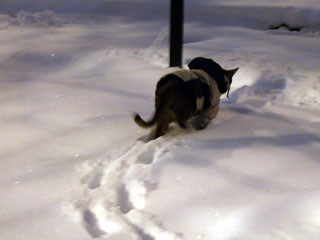 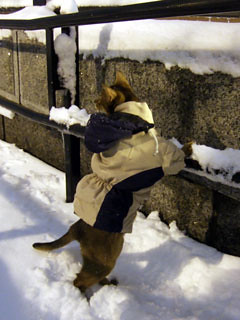 Later on, I could tell he was trying to get some of his feet out of the snow. 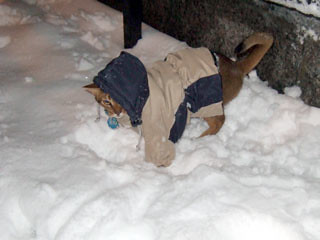 He was also getting frustrated at not being able to move the way he wanted to with his coat on. 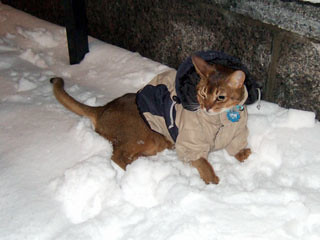 We sometimes order groceries from Peapod. It’s worth it when we need to get a lot of groceries, which we did this weekend to restock the refrigerator. Of course Gun-Hee has to inspect the delivery to make sure we got everything we ordered.