Well…I’m back. And yes, I actually did test positive for Covid-19. As did Björn and Kalle. My symptoms, oddly, were mainly stomach and intestinal, not lung-related. Not really what I was expecting at all. Of course, I really wasn’t expecting to get the virus at all, since I was following the rules my adopted country wouldn’t…but here we are. And I am pretty angry about it, too. Nobody wears a bloody mask in this country except me and I still get sodding Covid. Don’t get me started.

But, you know…this is a happy blog, about kitties and happy things, not anger at the way a nation has mishandling a worldwide pandemic…so… 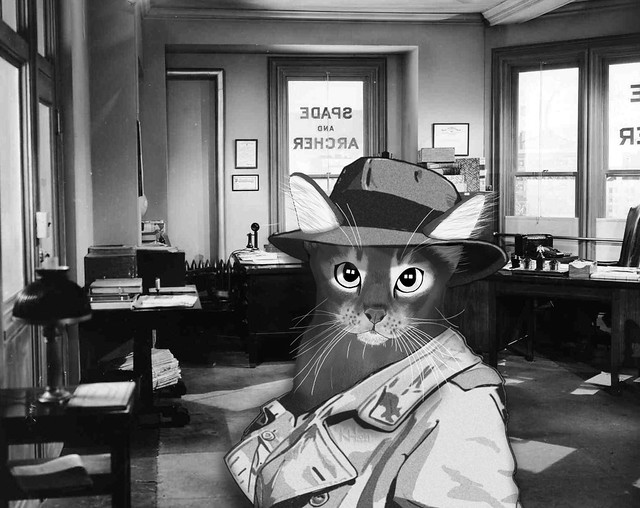 Here is Dashiell in the office of Spade and Archer in San Francisco. 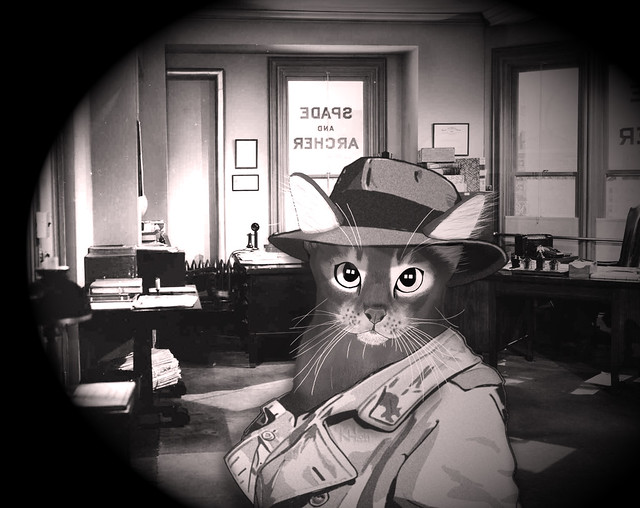 And here it is again, with a little extra noir added for good measure.

(PS: Covid-19 is no joke. Seriously, you don’t want to experience it.) 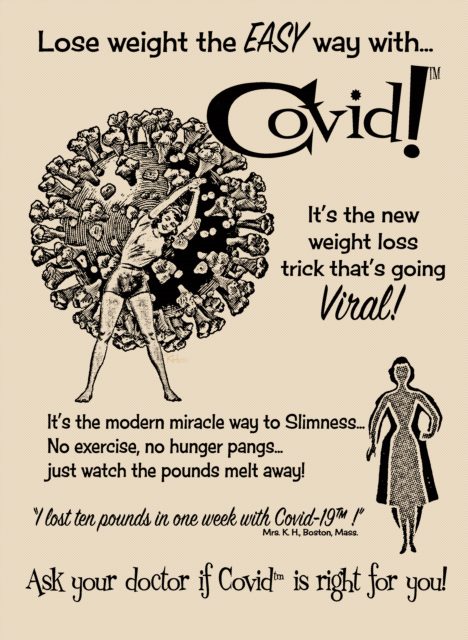 So, since I posted last week, Björn is still in the hospital (he may get out tomorrow), and I have tested positive for Covid. Despite having asthma, my lungs and breathing are remarkably all right; my biggest reaction has been in my gut. Nausea, a metallic taste in my mouth, and zero appetite. Since the last time I weighed myself (the last time I weighed the cats), I have lost 5kg (11lbs). Hey, every cloud has a silver lining, right? Anyway, the other night at about 4am, I had this brilliant idea for a 1950’s-style weight-loss ad…it doesn’t include a cat, but it’s a pretty decent Photoshop if I do say so myself. 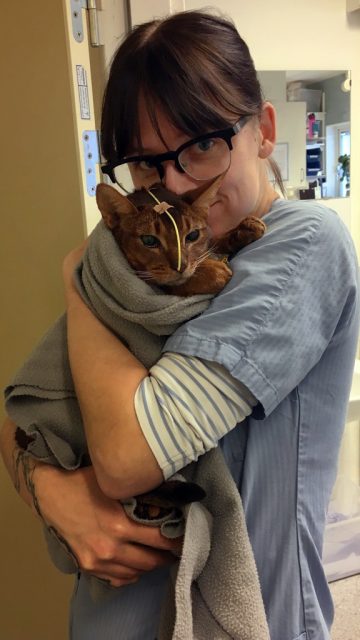 I haven’t posted since Thursday, because…Björn and I have been sick. Björn is actually in the hospital with Covid, and I have a wicked cough but no fever yet. It’s also the second anniversary of Jacoby’s death, so with all that going on I haven’t felt very inspired. Kalle and I will get tested for Covid on Tuesday, and hopefully Björn will be home soon. Thanks for your patience and understanding. 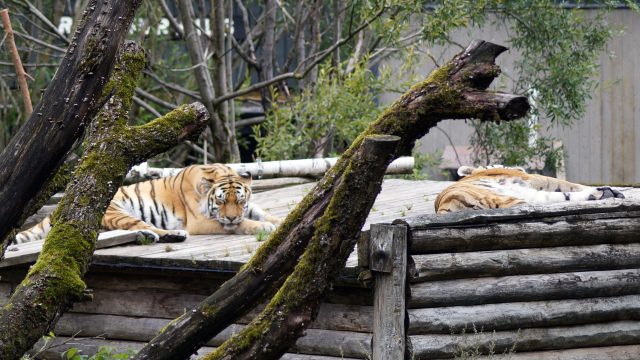 This is the last installment of the series about the big cats at Borås Djurparken. This week, it’s the Tigers’ turn. 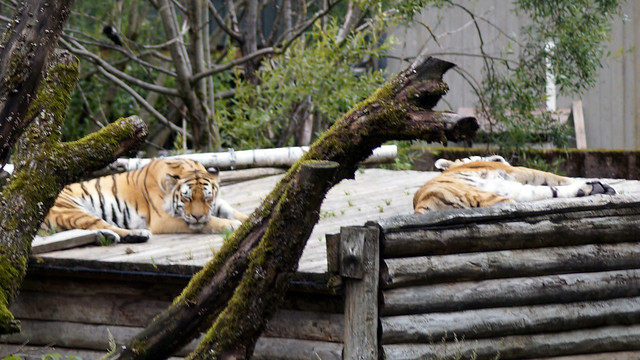 Unfortunately, unlike the other cats, the Tigers were…underwhelming. 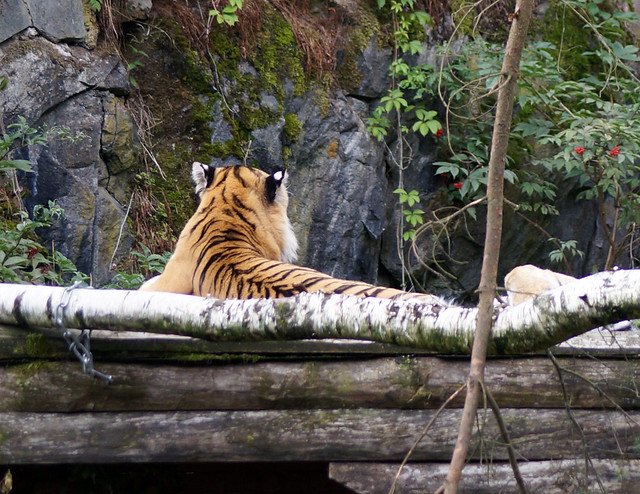 But at least we got to see them at all. We did not get to see the African Wild Dogs or the Wolves at all that day. 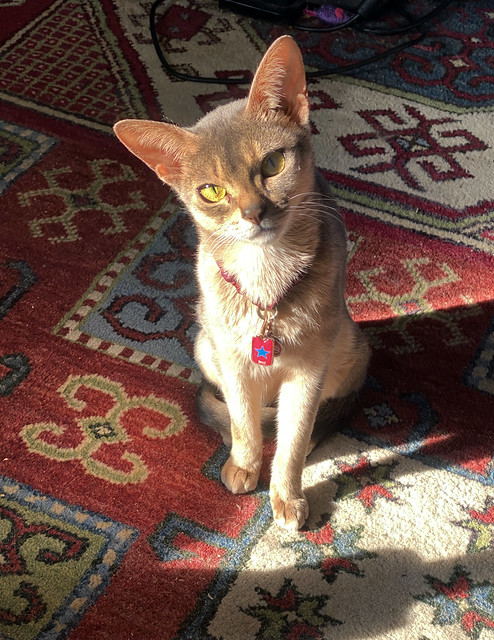 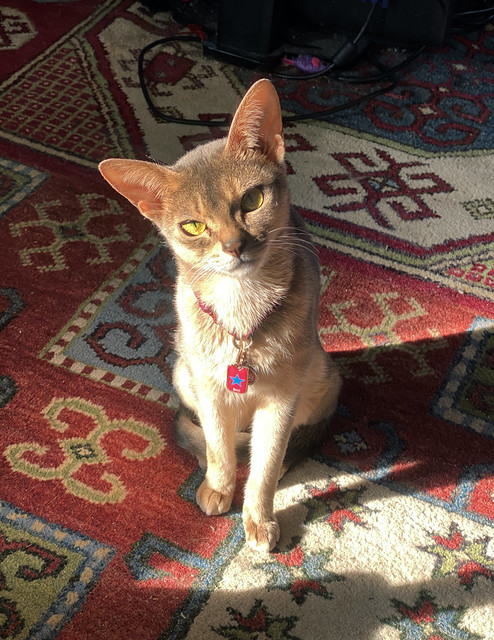 I have been working on the drawing of Kiipi and her kitten. 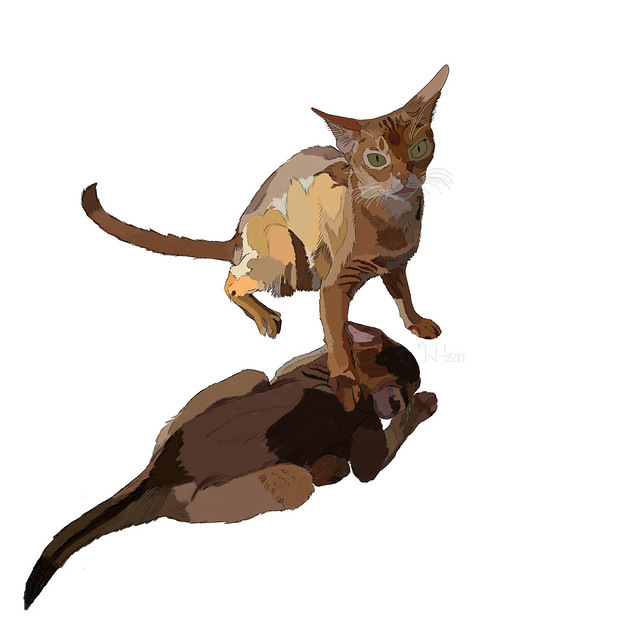 This is the ink outline with the base colour filled in. 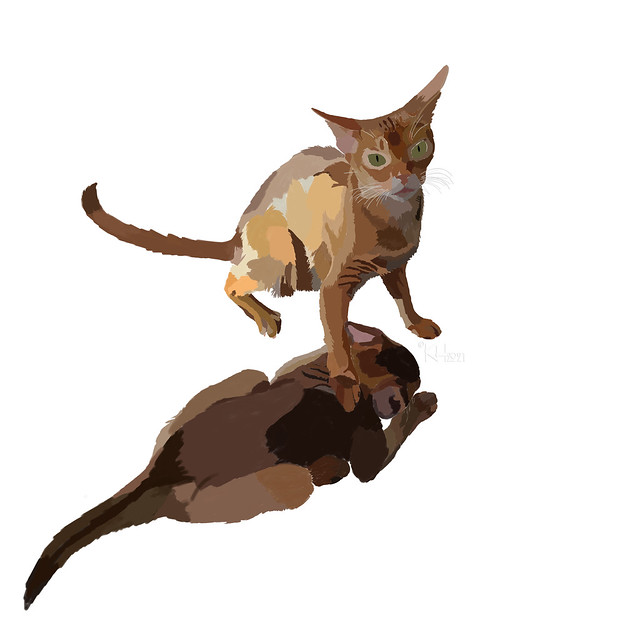 Without the ink, the colour alone has a rather neat “paint by numbers” effect. 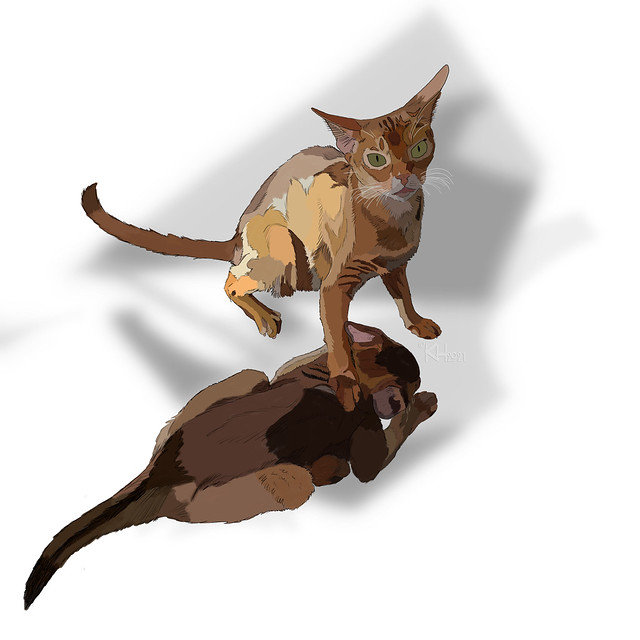 And here is the ink, colour and shadows. I just need to add the fut texture and background, and this one is finished! 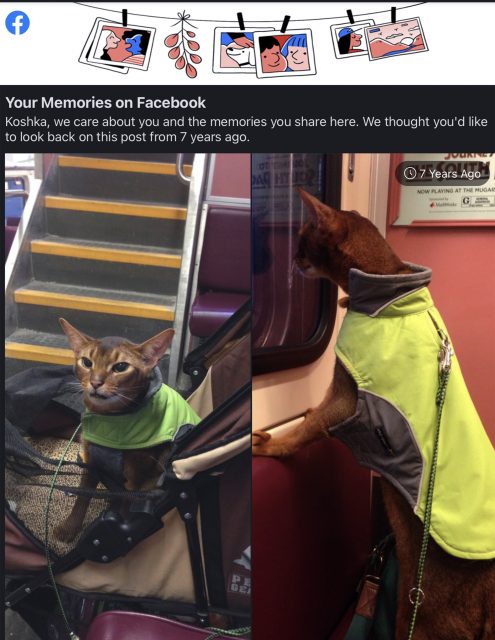 Facebook gave me some wonderful memories this morning. The first was the time a shirty MBTA conductor made me miss my stop to meet Meg for a cat show.

The second was of Tessie, happy with a box. Facebook can be evil…but it’s good for something, at least.

Yesterday, Dashiell was lying in a bright, warm sun puddle, and I commented that, in that light, Dash really reminded me of Jacoby in the sun. So Björn got the idea to introduce Dash to Pancake Jake. 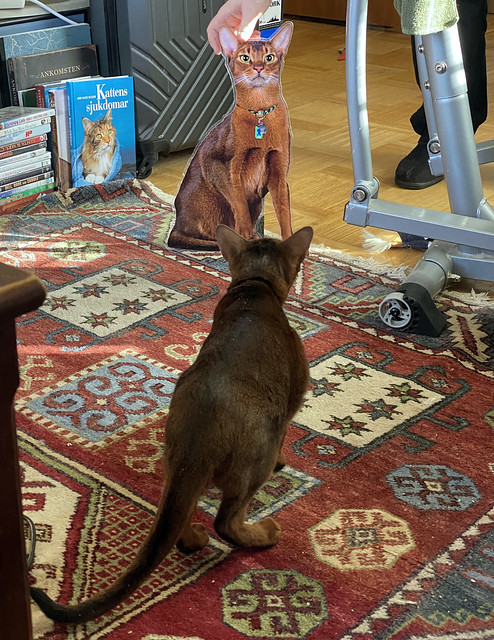 Dash was actually a little afraid of Flat Jake. 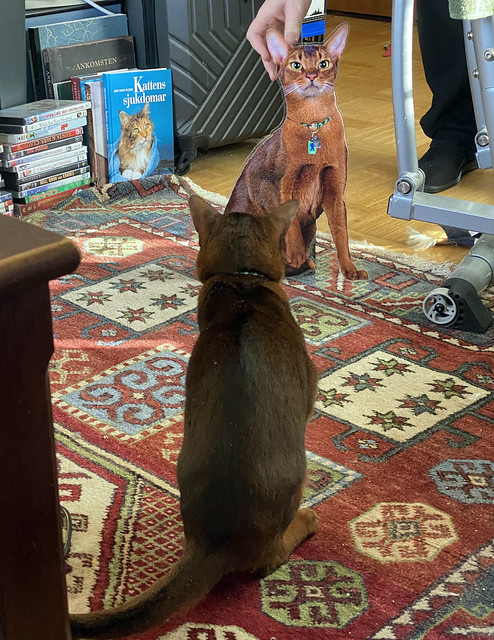 He actually backed away from Flat Jake. 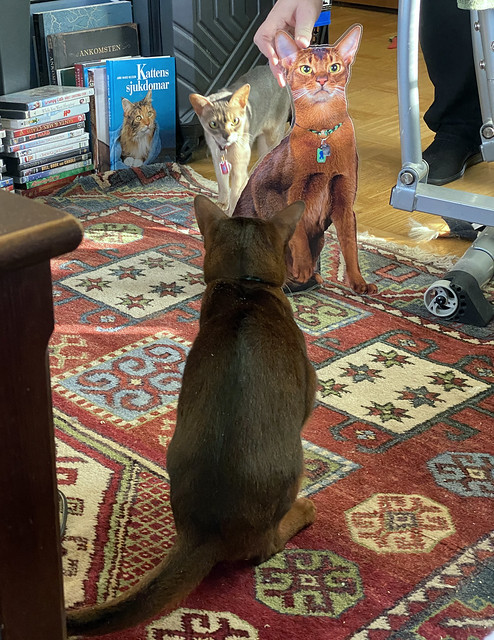 Lorelai came to see what was going on. Flat Jake sits in a window that Rory frequents, so she’s more familiar with him than Dash is.

In the Abyssinian and Somali Facebook group I admin, every Saturday is Caturday, the day where people can post non-Aby/Somali cat photos. Every week, I make a fresh banner, featuring Izaak, that’s a different colour scheme so people can tell them apart. 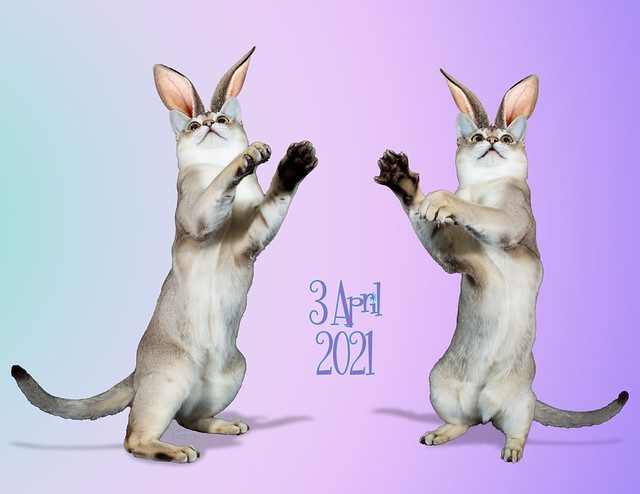 Since this weekend is Easter, I added bunny ears on Zak’s head. I was pretty pleased to find a photo of a rabbit that was almost the exact same colour as Zak. I wonder if rabbits come in sepia? 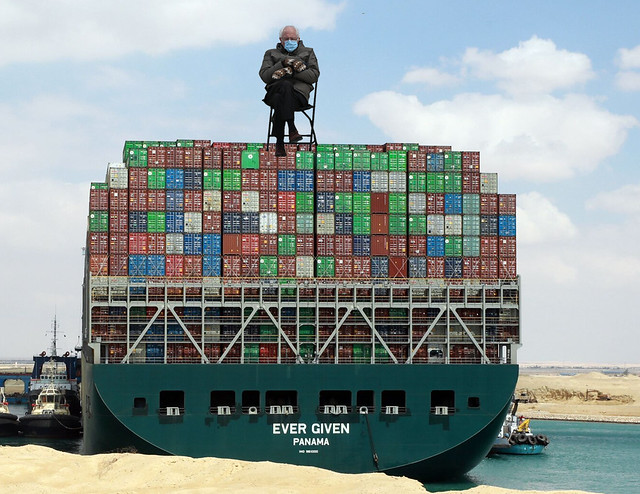 Continuing >the series about the big cats at Borås Djurparken. Last week, I focused on the Cheetah kittens, and this week we’ll look at the adult Cheetahsthey have at the park. 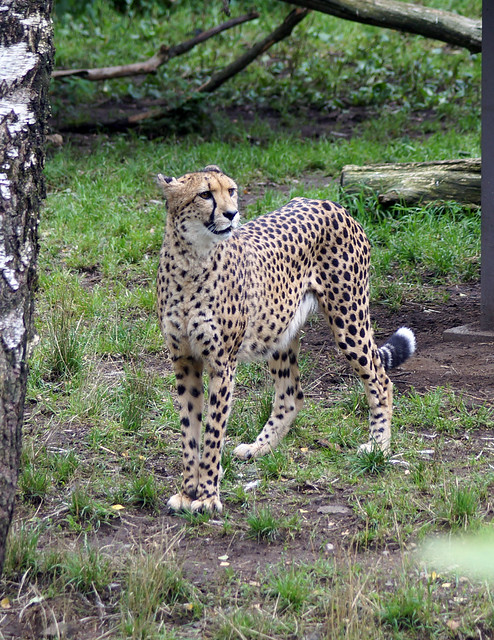 I don’t remember how many adults there were in the enclosure; I think there were two adults to the several kittens. I think it may have been two mothers with their combined litters. 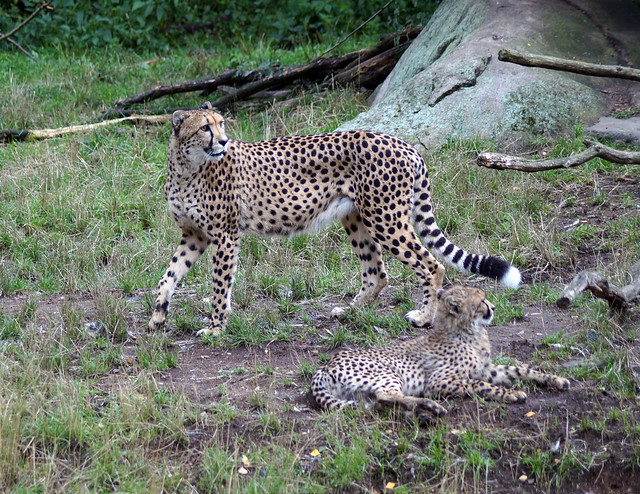 Interestingly, the adult Cheetahs didn’t really interact with the kittens all that much. 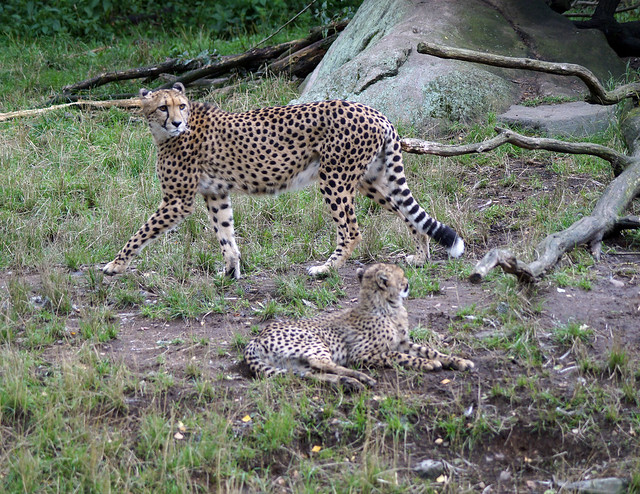 They just walked on past the kittens, staying in their own bubble. 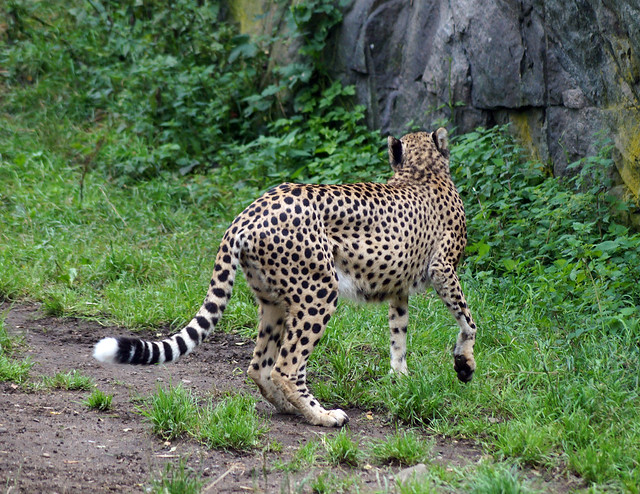 I love this shot. You can see the muscles in the hind legs; they are like coiled springs. The power of the Cheetahs' speed is obvious. 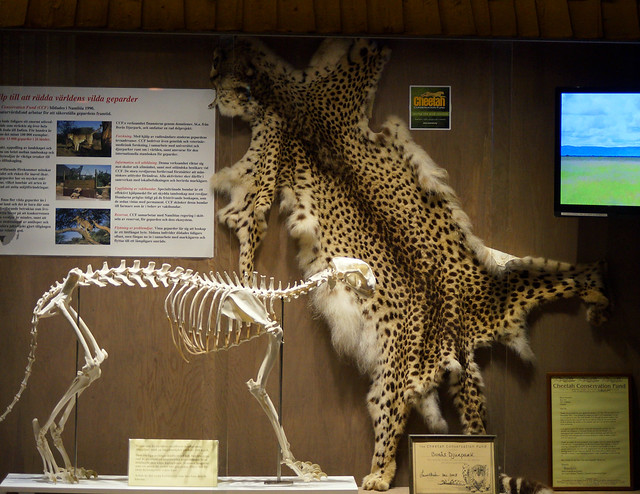 The park also had an informational Cheetah display with information on wild Cheetahs’ territories and life styles. 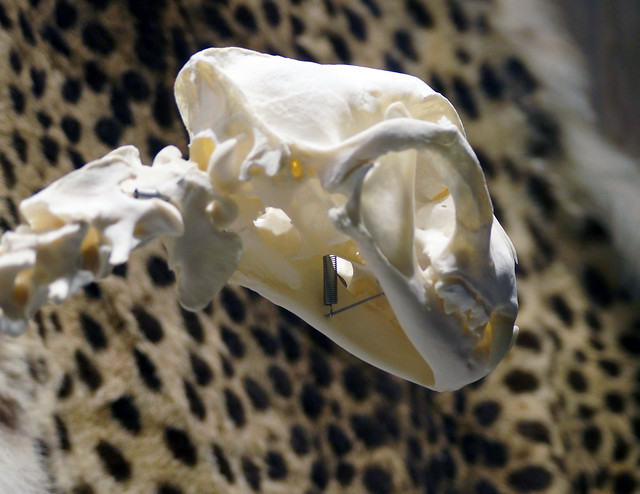 There was also an articulated Cheetah skeleton. You can really see how big their carnassials compared to the rest of the skull. 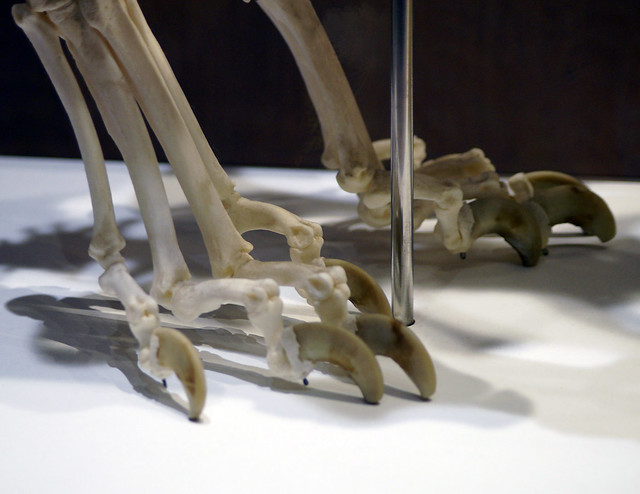 Cheetahs are the only cats whose claws don’t retract. But look how heavy and thick their claws are – they give them excellent traction when they’re chasing down prey. 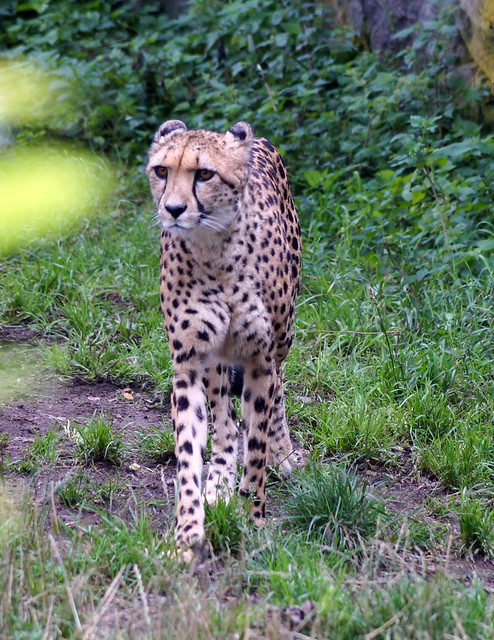 Still, as interesting as the insides are, looking at the outsides of the Cheetahs is a lot better.