Gun-Hee as a kitten. He loved the cat tree.

I just found out today that Gun-Hee’s brother, Rusty, also has FIP.
Here are the details (as posted to the YahooGroup for FIP Support):

During the last week of June, one of our placed Abys, almost 2 years old, was diagnosed with FIP on June 20. That was Gun-Hee. Sadly he declined very quickly and was euthanized on June 28. He was at Angell Animal Hospital in Boston for a couple of days initially where they did extensive testing, drained the abdominal fluid, and gave him IV fluids. He went home and spent his final week there. I was just devestated over what happened to Gun-Hee and his utterly devoted mom, Coco. I have read many of the posting on here since, but it just made me cry everytime, hearing about all these wonderful cats succumbing to this awful disease, and what you are all feeling.

Just a few days after Gun-Hee’s passing, my Mother and Sister called me about Rusty, Gun-Hee’s brother (they have two of Gun-Hee’s litter mates, a male, Rusty, and a female, Sophie). They said Rusty had not been eating as much lately and sleeping more than usual. When they said his middle seemed to be sticking out, I knew…he had FIP too 😦

They got him into the vet the following day and had the initial basic tests done, the Complete Blood Count and analysis of the abdominal fluid. Based on these tests, the probability stated was 92%. Given that Rusty’s brother had just died of FIP, raises that probability even further.

Later on I had the Direct Immunoflouresence Test done on the abdominal fluid (NOT the blood which does not distinguish between FECV and FIPV). Positive results on this test are stated to be 100%, my vet gives a slight margin of error an says 99.whatever% .

I DID NOT have the abdominal fluid drained. As I had seen stated many places, it usually just fills back up in a matter of a few days or a bit longer. My vet advised against draining as the refilling of the fluid would just draw more protein out of the blood stream and deteriorate the muscles even more quickly.

Yesterday was 2 months since it was first noticed that Rusty’s abdomen was distending. At it’s peak, around the second or third week of July, I measured him at the widest point and he was 21″. On August 14, I thought he didn’t seem quite as full and tight, so I measured him again – he was 19.5″. Since then he has been losing about 1″ every 4 days, he is now about 17″.

So what are the different possibilities that this can mean? Does anybody have any experience or ideas on that? My vet is on vacation this week and not back until September 2 – I will also talk to him once he’s back.

I appreciate any thoughts on this and wish you and your cats all the best.

I can’t describe how I am feeling right now. Sadness (the fact that Gun-Hee’s brother has that evil disease), relief (Rusty and Gun-Hee had very different lifestyles, so it wasn’t taking Gun-Hee on the subway or to the park that exposed him to the virus) and intrigue (maybe this is a clue as to how the disease occurs).

I talked to Sherry and I wonder if it isn’t something on the X chromosome? Because Gun-Hee’s litter was four kittens, two boys and two girls, and both boys got FIP. Neither girl has gotten it. What if it’s like colour-blindness, which is more common in men than in women because its carried on the X chromosome. Or hemophilia, which is similarly carried on the X? Sherry told me that something like 63% of the cats that come down with FIP are males, so that certainly makes it seem at least plausible.

Of course, as I told Sherry, I’m not a scientist, I just have an art degree and an interest in genetics…but I wonder. I just wonder.

Gun-Hee was so trusting. He’d sleep in the most amazing variety of positions. 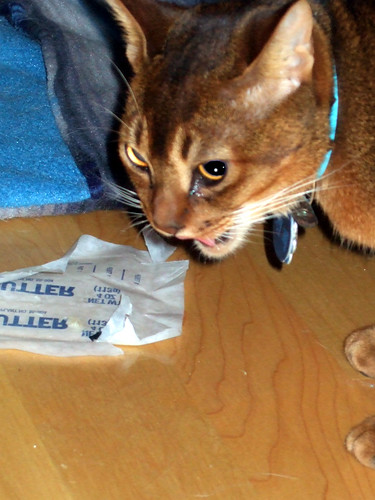 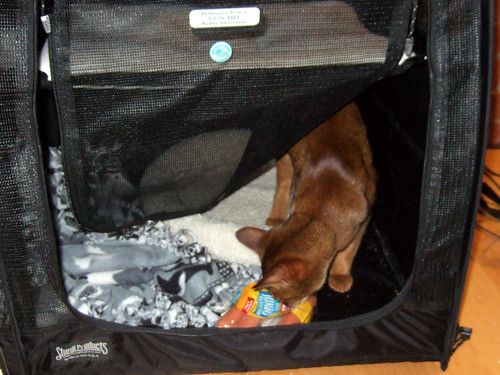 Gun-Hee was so funny…he used to steal food and hide it in his house. Here, he has stolen hot dogs…

Another from when I took Gun-Hee to the office. I love this shot of him sitting at my boss’ desk.

Another photo from when I brought Gun-Hee to work with me.

Today was a bad day. We had to go to Petco, and all I could think of was the times that Gun-Hee had gone to that Petco with us…

I miss him every day. Terribly.

Here’s Gun-Hee helping my co-worker Julia, the day I took him to the office.

Gun-Hee’s TV obsession became even more amusing when we were watching something with big cats.

Gun-Hee loved to explore the hallway. I let Kylie into the hallway today…and all she wanted to do was get back inside our apartment…

Gun-Hee loved his cat show cage. We kept it set up at home,
and he treated it like his secret club house.

I miss him every day.

The first day Gun-Hee was with us, the girls weren’t too sure about him.

Gun-Hee loved to go outside, and we waited each spring for the weather to be nice enough to go outside. This is from last spring, in amongst the crocuses.

I’m glad this summer is so rainy. On nice days all I can think of is taking Gun-Hee outside.

Gun-Hee with his siblings. He’s the one second from the right, with the blue collar.

Gun-Hee was so helpful around the house…