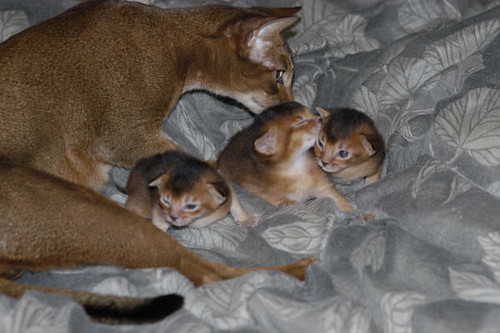 Jacoby has two families. His birth family and his home family. This is Jake with his mother Catalina, littermate brother Dillin and his sister Scarlett. 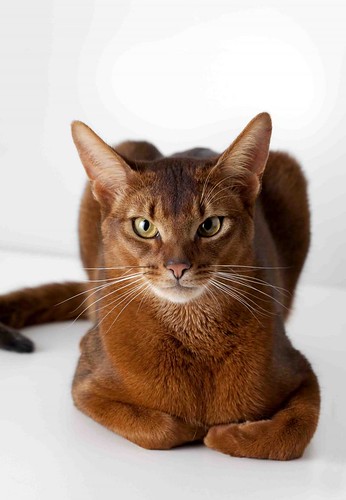 This is Jake’s brother Dillin (GC Pellburn Johnny Dillinger) as an adult. Can you see the resemblance?

Dillin just granded in CCA (the Canadian Cat Association) last weekend, and he was shown by Sherry’s niece, who won Best Junior Exhibitor at that show! Not a bad day at the show. The Aby in this photo is actually Jaspurr, Dillin’s son and Jake’s nephew. 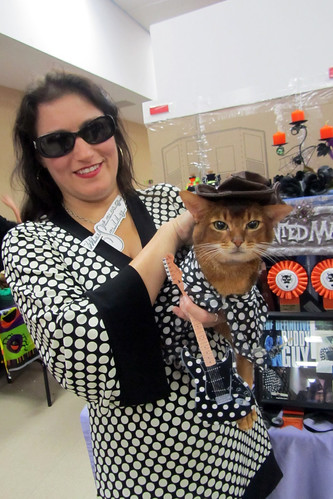 Jake has an older brother (same parents, different litter), too: here is GC Pellburn Buddy Guy Slippin’ In with Sherry…you can see that Buddy Guy shares Jake’s affinity for playing dress up! 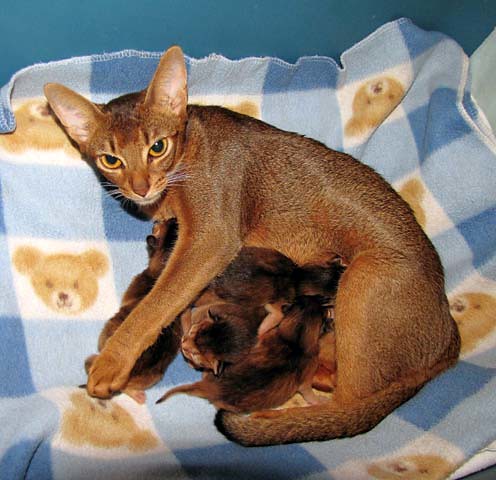 Jake also has nieces and nephews. This is Siren with Dillin’s kittens.

This is another of Jake’s nephews, all grown up! His name is Bowie…doesn’t he look like Jake? I actually did a doubletake when I saw this photo, they look so similar. Bowie is Dillin’s son and Jaspurr’s littermate brother. 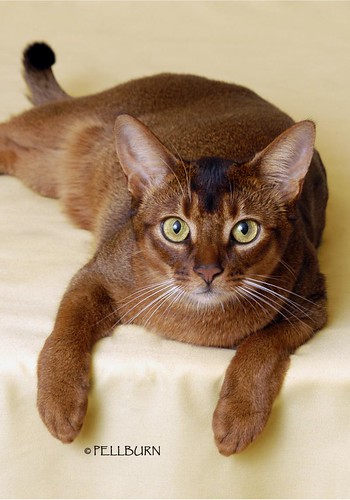 This is Jake’s Uncle Whitey (GPr Pellburn White Lightning). He is a littermate brother of Jake’s father Scar.

The red Aby in this photo is another uncle of Jake’s. Clancy is actually one of Scar’s half-brothers (their father is GC Haro’s Jake of Eszencia – yes, “Jake” is also a family name). The ruddy is a brand new Grand Premier (!) and a cousin of Jake’s: Eszencia Sensational Seamus. Jake and Seamus share a great-great grandfather, El Qahira’s Elleon. 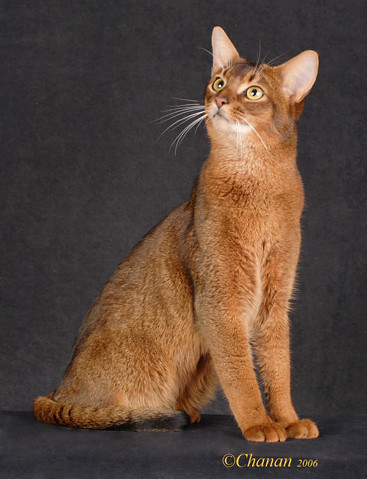 And here is Jake’s father, the late, great GC Pellburn Scarface Cat Pacino, in a photo taken by Chanan in 2006.

I love this photo of Scar because, 6 years later, Chanan took Jake’s photos against that same colour background! Like father, like son, eh?

Abyssinians are all, pretty much, related to each other and with resources like ERoS and The Abyssinian Homepage’s Pedigree Database, it’s easy to discover to whom any Aby is related and how close that relationship is. For example, my friend Molly’s cattery is Tigerflower, and sure enough, Jake has some Tigerflower cats in his pedigree: Rah! Rah! Rudyard, Camilla, Tex Ann, Gordenia and Magic Dragon. The closest is Camilla -> Murteza’s Rambo Dio -> Murteza’s Tosca of Mellowmews -> JP Morgan -> Zehnders Best Bette of Devande -> Zehnders Cuba of Instincts -> Instincts Rasberry of Abysills -> Instincts Santa Catalina of Pellburn -> Jake

Molly told me this about Jake’s Tigerflower ancestors: Rudyard was named “Rah! Rah!” because I had never shown a ruddy before and thought he needed a little boost. He beat a national runner in his first show, and granded easily. Tex Ann was a wonderful red, named for a Ft. Lauderdale socialite, (I lived there at the time) – her name was real, and I liked it. Wain Harding agreed to a breeding between Tex Ann, whom he liked, and his National winner, Bastis Flash Gordon. Pick kitten was thusly “Gordenia”…who granded and retired with a fabulous pet owner here in Orlando with whom I am still in touch. Magic Dragon was gorgeous, super-friendly blue male, eagerly adopted when neutered, by a Maine Coon breeder in Ft. Lauderdale who wanted
him for hugs and “contrast”. He subsequently gave her Maine Coons aerobic lessons, and they all lost much-needed weight…while he ate all of their (5-6?) meals a day and turned into a fat Aby! 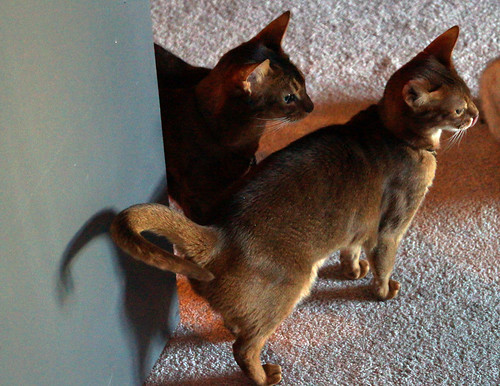 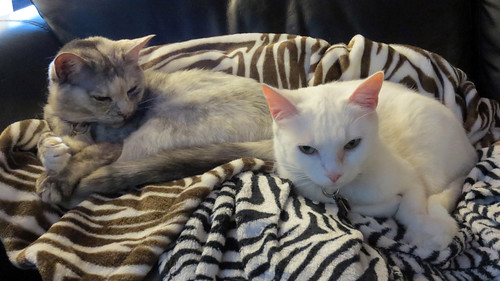 And let’s not forget Tessie and Kylie! Tessie has a silver Aby grandmother, so she and Jake are likely very distantly related. Kylie, on the other hand…she and Jake are only related through their humans!