We’ve been ordering groceries online from Peapod and getting them delivered. This works well, but sometimes not seeing exactly what you’re buying leads to some surprises. Over the weekend I was shopping and noticed that they had Australian Semi-Boneless Leg of Lamb (5-7lbs ) legs of lamb on sale. Well, I like lamb, it was an excellent price ($1.99 per pound!), we have one of those food sealers and room in the freezer and the leg has less fat to cut off than other cuts. So I ordered one.

I wasn’t really prepared for how huge this thing was going to be. It was closer to the 7lbs than the 5, and I swear it was as big as the cats. And as for semi-boneless? It had an entire hip joint and part of a femur, so I can only guess the “semi” referred to the fact that the bones had been cut. It was also sheathed in a half-inch of solid fat; yes, the leg is a leaner cut, but it’s not fat-free…the fat is just all on the outside and easier to remove. So I got out a knife and just went for it.

It took me about twenty minutes to trim the fat and carve the thing up into freezable meal-sized portions. As soon as I unwrapped it, Gun-Hee was swarming (if you don’t think a single cat can swarm, you’ve never seen a determined Abyssinian) so I locked him up in his show cage. He kept meowing as I cut, with different tones, volumes and inflections, and I couldn’t resist translating, “Hey, I’m in here! Remember the kitten? Yep, still in the cage. Hey wait, where’s the kitten? Oh, right, still in the cage. What are: the plugged-in iron, your mom’s birthday, and a kitten in a cage? Things you better not forget! You guys? You are gonna let me out of here, right? Mom! Mom? You know I’m in here, right?”

I managed to cut myself while dealing with a particularly nasty bit of fat, but didn’t want to deal with it til I’d finished with the meat. Once all the packaged future meals were safely in the freezer, and the small pieces I wanted to eat were set aside, I turned on the Foreman Grill and went to the bathroom to get a Band-Aid…not realising that Gun-Hee had been let out of the cage. Next thing I hear is a loud crash, and then, “Sweetie! Gun-Hee has your meat!”

“Wait…I’m putting a Band-Aid on…what?”
“Gun-Hee took your meat and he’s running around with it!”

I finish my first aid and go into the living room, where Gun-Hee is crouched under the coffee table with the largest piece of lamb. I take it away from him and go into the kitchen, where I find the other pieces of my dinner on the floor. I’d had them on a paper plate in the centre of the stove, on top of the broiler pan that lives there part time, while the Foreman was heating up. The crash was the broiler pan reacting to the introduction of a 6½ month old carnivorous force of nature landing on it and then using it as a launching pad. Gun-Hee goes back into his cage, I rinse off the meat and pop it onto the grill…and I’m just laughing the entire time.

“Why did you leave the meat out like that?” My husband asked.
“I needed to get a Band-Aid on…and it was just there for a second while the grill was heating!” I said.
“Well, you should have known Gun-Hee’d go straight for it!”
“Yeah, well…I hadn’t realised you’d let him out…” then I collapse in giggles again. “You know, he took the biggest of all the pieces, right?”

My husband laughs too. “He took off with it, too.”
“He didn’t eat any of it though. He just grabbed it and ran off!”
“What was he thinking? He can’t have thought he’d get away with that!” 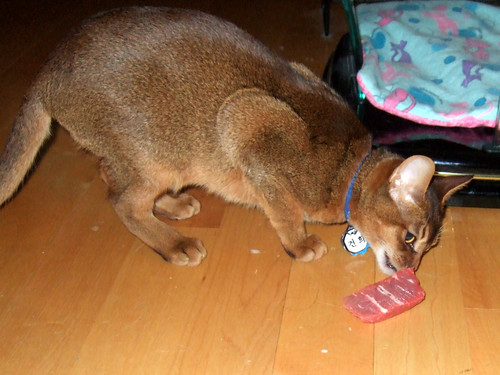 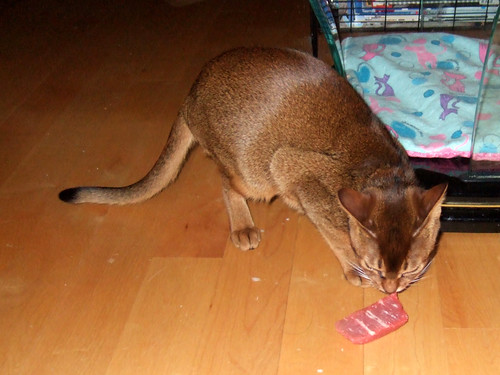 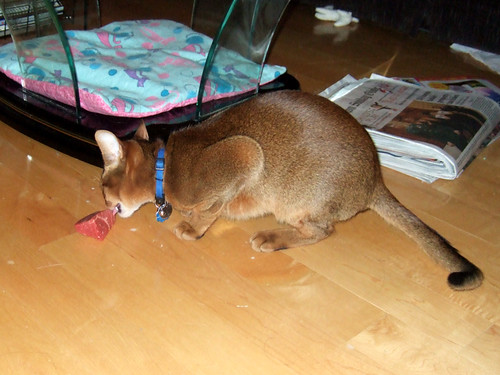 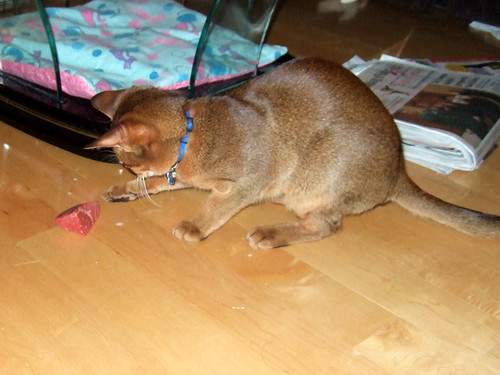 3 thoughts on “Gun-Hee on the Lamb”