Everyone knows kittens are cute. But Abyssinian kittens take it to a completely different level.

This cartoon is inspired by Morag Richardson of Eskarina Abyssinians and her Esme’s most recent litter of three little Aby nutcases, Edith, Wilfred and Vera. 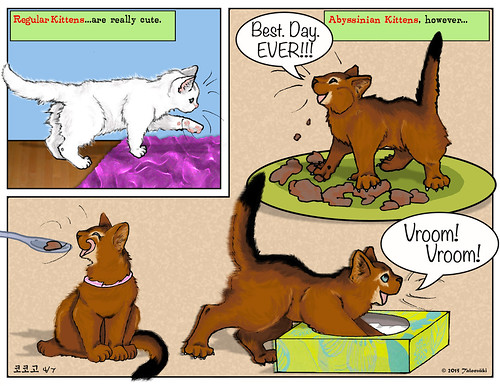 The kittens’ full names are: Eskarina Wilfred Owen, Eskarina Edith Cavell and Eskarina Vera Brittain – they were named after a poet. a nurse and a writer from WWI. An interesting thing about these three: Wilfred and Edith were born on 18 February…and then, at 2am on 19 February, little Vera was born!

My cartoon is based on this video…because even I couldn’t make up a kitten turning a tissue box into a go-cart!

But really, the cartoon was inspired by Ann Cook McCall’s comment: “I can’t get over Edith chowing down. I came imagine her cheeks completely full saying, ‘Best day ever!'” So, of course I had to sketch that! And like Topsy, it just grew. Also, a funny thing about the tissue box Wilf is pushing: It’s Tesco Balm Mansized Tissue box!

This lovely boy showed up in a Craigslist ad yesterday:

“I have an Abyssinian in need of a new home. He’s a very sweet house cat, weighing about 10 lbs. His name is “Kovu” (also responds to “Coco” ~ his nickname).

Unfortunately, he is not friendly with other cats. He is somewhat dog friendly, but definitely means to let the dog know who’s boss. I acquired my dad’s Plott Hound when he died, and the two have been fighting lately. However, he is fine with my 3 month old puppy.

He is great with children who are gentle with him, however he can be flighty and hide a bit if he’s chased. (For example, he hides under the bed when my little sister comes over because she chases him around, trying to pet him.) He mostly likes to just sit on the couch and cuddle, and loves the occasional play session with strings.

Kovu is neutered and up-to-date on all of his vaccinations, and you’ll be provided with all his paper work when you come to pick him up. He’s also on Trifexis and is due for another round in 10 weeks. You can also have all of his supplies (toys, bowls, and travel crate), including his automatic litter box.

His rehoming fee is $100. I love my cat. I wish I didn’t have to give him away, but as it stands now, I can’t keep him. Especially since he’s not getting along with my dad’s dog. I want to ensure that if anyone takes him, they’ll take good care of him.”

Our friend Kristen, on behalf of the newly-formed Northeast Aby Rescue (NEAR), is assisting the adoption through Rescue Me:

“Northeast Abyssinian Rescue is assisting Kovu’s owner find him a new loving home. Kovu is a calm loving 8 year old neutered male Abyssinian. He has never lived with another cat. He lives with 2 dogs but isn’t getting along with one of them. Kovu is currently located in central Florida. All applications will be considered. If you would like to know more about this sweet boy, please send an email to neabyrescue@yahoo.com”

Kovu is in the Orlando, Florida, area if you know of a home that needs an Aby in it.